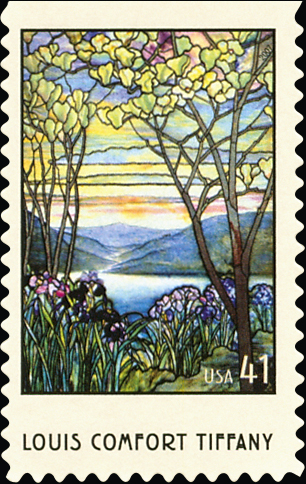 Although trained in painting, his attention turned to interior design and glass art, and he began working with stained glass in the 1870s.

Originally working with partners and associates, Tiffany's fame grew, and he began his own studio in the 1880s, creating beautiful artwork, lamps, ceramics and jewelry, incorporating a variety of glass types, including a trademarked iridescent glass known as "Favrile." His designs and mosaics often featured floral elements, and he is considered a pioneer of the art nouveau movement.

The United States Postal Service issued a single 41¢ commemorative in 2007 honoring Louis Comfort Tiffany (Scott 4165). The stamp design shows the glass artwork Magnolia and Irises designed by Tiffany and created by the Tiffany Studios around 1908 using leaded Favrile glass. The original art, measuring 60¼ inches by 42 inches, is part of the collection of the Metropolitan Museum of Art.

Just four years earlier, the Postal Service issued its first variety of a 1¢ stamp showing a Tiffany lamp (and inscribed with the words "Tiffany Lamp"). The perforated coil is Scott 3758.