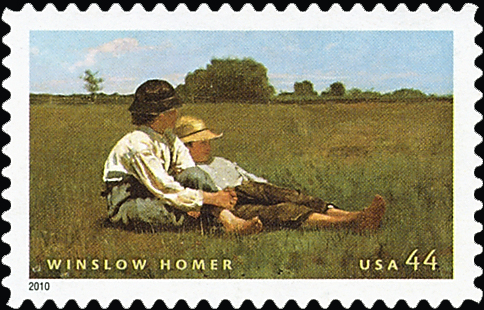 American artist Winslow Homer was born Feb. 24, 1836, in Boston, Mass. After an apprenticeship with a Boston printer, Homer became a freelance illustrator in his early 20s and moved to New York City, where he studied at the National Academy of Design.

His early works included scenes from the Civil War and rural America, but he was captivated by the sea, which he often portrayed in oil paintings and watercolors. He traveled to locations as diverse as England and Cuba, moving in 1884 to the Prout's Neck peninsula on the coast in Southern Maine and establishing his studio there.

The first United States stamp honoring Homer showed his 1873-76 oil painting Breezing Up, which is in the collection of the National Gallery of Art. The 4¢ stamp with engraved design was issued Dec. 15, 1962 (Scott 1207).

A set of 20 32¢ stamps titled Four Centuries of American Art was issued Aug. 27, 1998, and includes one stamp showing a dramatic sea scene in oil, Homer's Fog Warning (Scott 3236j). The 1885 painting is in the Museum of Fine Arts in Boston.

Most recently, a more peaceful image from 1874 is shown on a 44¢ stamp in the American Treasures series: Homer's Boys in a Pasture, painted in oil on canvas, and also in the Museum of Fine Arts. The stamp was issued Aug. 12, 2010.