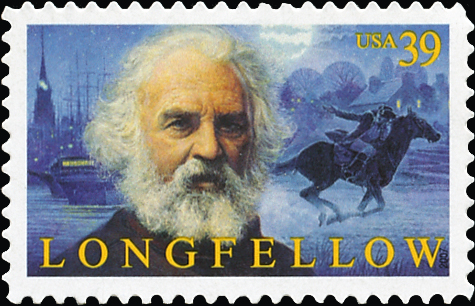 Henry Wadsworth Longfellow was born Feb. 27, 1807, and during the 19th century he achieved unparalleled fame as a poet that extended well beyond the American borders.

After studying in Europe, Longfellow returned to the United States and taught at his alma mater, Bowdoin College in Maine. In 1836 he accepted a position at Harvard.

He was in his 30s when his first collection of poems, Voices of the Night, was published. In later years his fame grew with Evangeline in 1847, The Song of Hiawatha in 1855, and The Courtship of Miles Standish in 1858.

In 1861, his poem Paul Revere's Ride was published in The Atlantic Monthly. Its first lines, "Listen, my children, and you shall hear of the midnight ride of Paul Revere," are among the best known of all American poetry.

A 1¢ blue green stamp in the 1940 Famous Americans series, issued in Longfellow's birthplace, Portland, Maine, shows a portrait of the poet designed by William A. Roach and engraved by Charles A. Brooks and Carl T. Arlt (Scott 864).

On March 15, 2007, to mark Longfellow's birth bicentennial, a 39¢ stamp was issued, designed by Howard E. Paine with an illustration of Longfellow and a scene from Paul Revere's Ride painted by Kazuhiko Sano (Scott 4124).