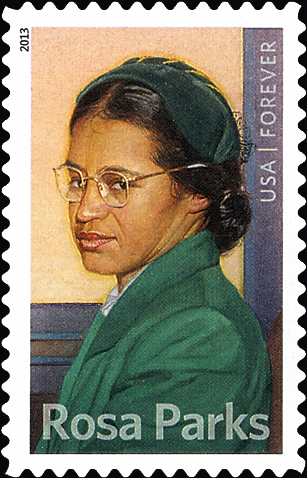 She married barber Raymond Parks in 1932 and attended college in Montgomery, Ala., in the 1930s. In 1943 she became a secretary of the Montgomery NAACP, and began working as a seamstress just a few years later.

Sitting in a segregated Montgomery city bus on Dec. 1, 1955, Parks was told by the driver to vacate her seat for a newly boarded white male passenger. She quietly refused, and subsequently was arrested for violating the segregation laws then in force.

Convicted days later, Parks became a symbol for those opposing the unjust laws, and a successful boycott of the Montgomery bus system began, led by Dr. Martin Luther King Jr.

Often identified as the "Mother of the Civil Rights Movement," Parks continued to work as a civil rights activist for many years. She died at age 92 in Detroit, Mich., on Oct. 24, 2005.

A United States forever stamp honoring Rosa Parks was issued on her birthday in 2013 (Scott 4742). The stamp design shows a portrait of Parks painted in gouache on illustration board by Thomas Blackshear II.