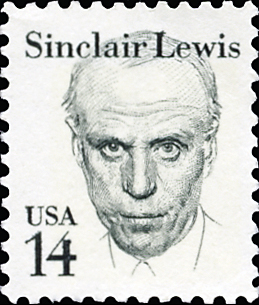 Author Sinclair Lewis was born Feb. 7, 1885, in Sauk Centre, Minn., and attended Oberlin Academy in Ohio prior to studying at Yale. He was editor of the Yale literary magazine, and continued writing after graduation, working for publishing firms in New York.

After his first six novels were published, Lewis achieved profound success with Main Street in 1920, followed by Babbitt in 1922 and Arrowsmith in 1925. He also wrote short stories that were published in The Saturday Evening Post, Cosmopolitan and other popular magazines.

Several of his books were made into films, including Elmer Gantry, filmed in 1960 with Burt Lancaster in the title role.

In 1930 Lewis became the first American to win the Nobel Prize for literature, which was awarded "for his vigorous and graphic art of description and his ability to create, with wit and humor, new types of characters."

The Sinclair Lewis Society at Illinois State University notes, "His concern with issues involving women, race, and the powerless in society make his work still vital and pertinent today."

A 14¢ Sinclair Lewis stamp in the Great Americans definitive series (Scott 1856) was issued March 21, 1985, in Sauk Centre, just a few weeks after the 100th anniversary of his birth.