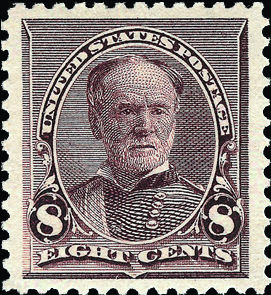 William Tecumseh Sherman was born Feb. 8, 1820, in Lancaster, Ohio. He graduated from West Point and entered the Army in 1840 as a second lieutenant.

He left the Army in 1853, but joined the 13th U.S. infantry regiment as a colonel following the 1861 attack on Fort Sumter.

Sherman is most remembered for the ferocity of his invasion of Georgia in 1864, the subsequent occupation of Atlanta, and leading more than 60,000 troops in the devastating “march to the sea.”

Sherman is featured on a 32¢ stamp in the 1995 Civil War pane of 20 (Scott 2975q). On the reverse of that stamp is the inscription, “Union Major General William Tecumseh Sherman, 1820-1891, Blunt, grizzled strategist, distinguished himself at Shiloh and Vicksburg. Captured Atlanta. Introduced total warfare in his March across GA and through the Carolinas. Negotiated lenient peace.”

His first stamp appearance, however, was more than a century earlier, on an 8¢ lilac stamp issued March 21, 1893 (Scott 225), two years after his death.

More recently, in the 2009 set of four 42¢ stamps honoring Abraham Lincoln, Sherman appears on the final stamp (Scott 4383) with Lincoln and Gen. Ulysses S. Grant aboard the steamboat River Queen.