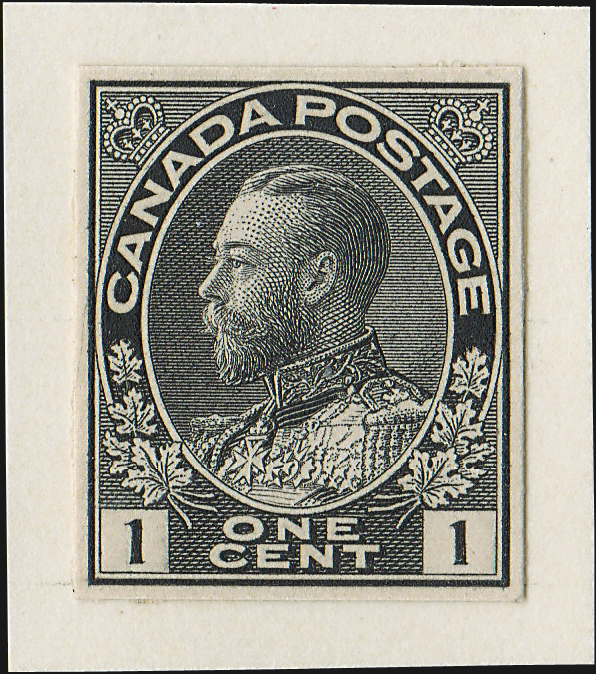 Two sets of 1930 record die proofs printed in black will be auctioned during the March 6-7 sale of the Brigham collection&rsquo;s stamps of the Admiral issue. 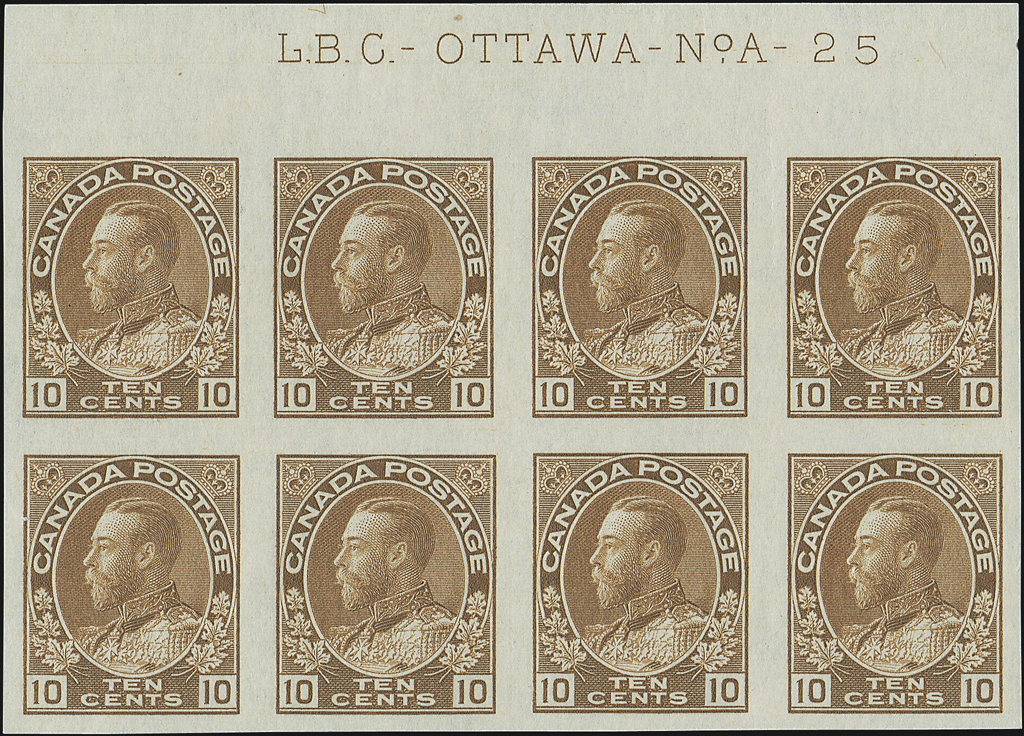 An imperforate imprint block of eight 10¢ stamps from Canada’s Admiral issue, part of a set of blocks offered in the March 6-7 auction of the Brigham collection.

The ongoing series of auctions offering items from the Brigham collection of Canada will continue with a fourth sale featuring the 1911-31 Admiral issue.

The set is known to collectors as the Admirals because the design of each stamp shows a portrait of King George V wearing his Admiral of the Fleet uniform.

The public auction is presented by the Brigham Auctions firm and will take place March 6 and 7 at the Brampton Golf Course, 7700 Kennedy Road, Brampton, Ontario, Canada.

The Friday session begins at 1 p.m., and the Saturday session starts at 5 p.m.

Along with singles of the issued stamps, the items on offer include a substantial number of pairs and other multiples for each of the issues in the series, plus a number of intriguing and rarely seen varieties, including imperforates, wet and dry printing, booklets, coil paste-up strips and pairs, misperforations and much more.

Charles J.G. Verge, CEO of Brigham Auctions, told Linn’s that Ron Brigham sought out as many plate numbers as possible when building this collection, and that will provide collectors with opportunities to obtain the items they need in a number of smaller lots.

“This collection has never been shown publicly because it is too vast,” Verge said, and the catalog does reveal a wide selection of material.

Collectors will find numerous items available with estimates of $100 or less, as well as some rarities with far greater values.

One early lot in the auction offers imperforate top margin imprint blocks of eight, complete for the 4¢ to $1 denominations (Scott 110-122). These unique items, ex-Tomlinson, Jephcott and Brigham, are described as having full pristine original gum, lightly hinged on the top margin (but with all stamps never hinged).

The imperforate stamps are listed as pairs in the 2015 Unitrade Specialized Catalogue of Canadian Stamps. The Brigham auction catalog reports a value for this set of blocks at $200,000 in Canadian dollars (approximately US$160,000 in mid February). The opening price is $70,000 Canadian (approximately US$56,000).

Two rare sets of 1930 record die proofs printed in black are on offer. One set of 12 has a single proof of each value (including the unissued 6¢) on card, mounted on an additional card backing, described by Brigham as one of only six sets known. This first set is estimated with a value of $10,000 Canadian (approximately US$8,000), opening at $6,250 (approximately US$5,000).

The second set is described as a rare complete set, for it includes both dies of the 1¢ and 3¢ denominations, plus the unissued 6¢.

This set on card is mounted on additional quadrilled backing with original die numbers noted beneath each one, and is described as “the second of only six such sets known, only five of which are in private hands.”

Collectors will find an appealing number of unusual varieties from the Admiral issue, such as unsevered coils in pair, blocks and gutter blocks.

Additional details about the auction can be found at http://brighamauctions.com; or may be obtained by contacting Brigham Auctions Ltd., Suite 223, Plaza 2, 350 Rutherford Road S., Brampton, ON L6W 4N6, Canada.