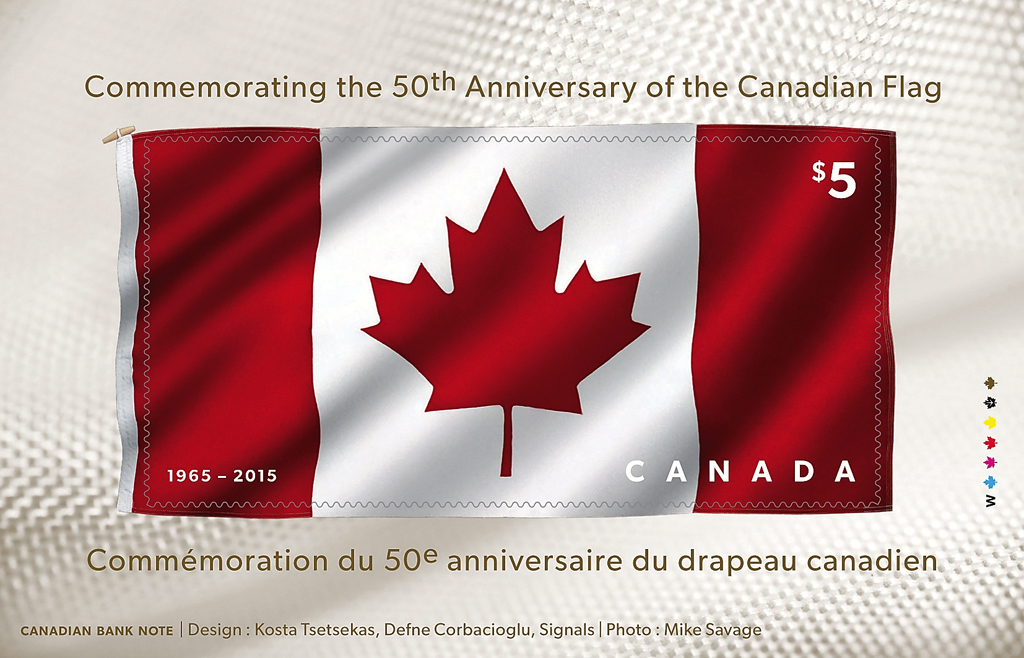 A bigger flag at a higher price, Canada’s new $5 souvenir sheet is more than 5½ inches wide, and is “Canada Post’s first fabric stamp,” and 1,000 uncut press sheets are also being marketed. 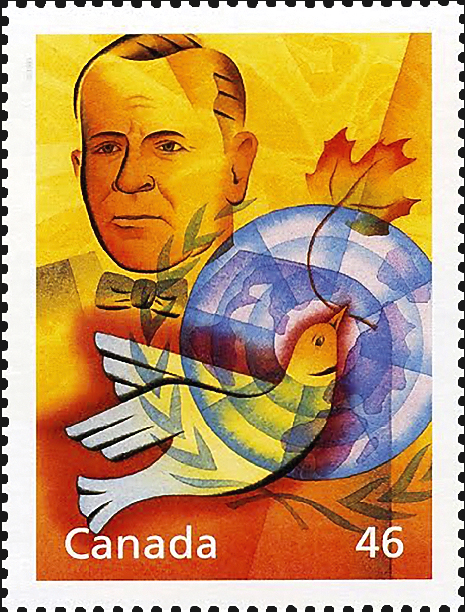 This Millennium stamp issued in 2000 recalls Prime Minister Pearson’s role as an ardent peacekeeper and in advocating a new flag for Canada. 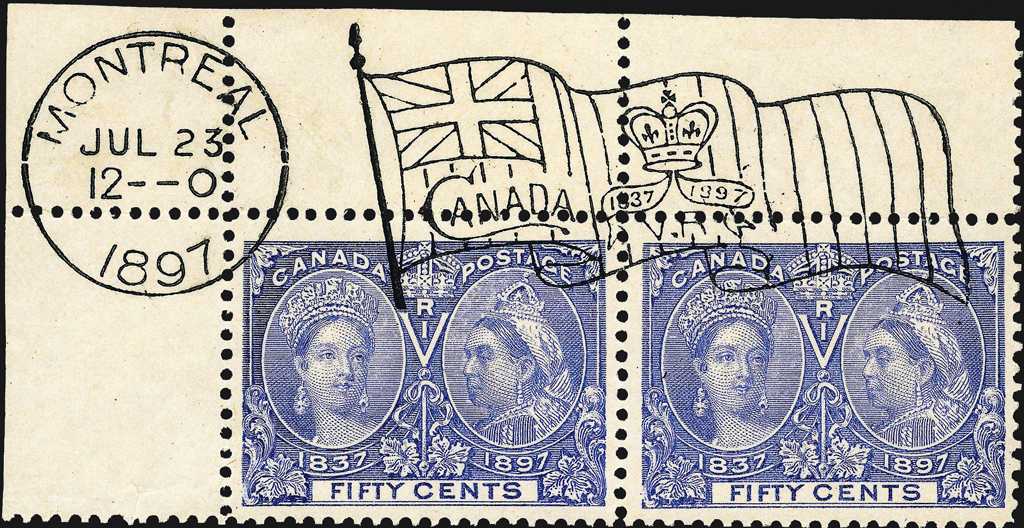 From 1868 to 1964, Canada used a flag with a Union Jack prominent in the top-left corner, as on this 1897 Montreal machine cancel on two 50¢ Queen Victoria Diamond Jubilee stamps. 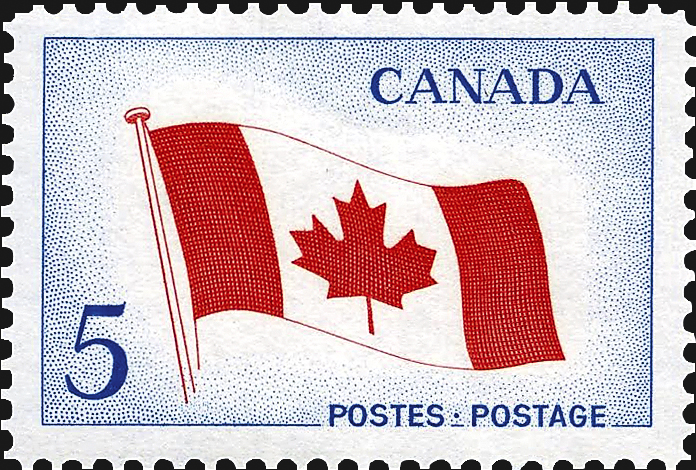 Canada saluted its new flag in 1965 with this simple 5¢ commemorative stamp. 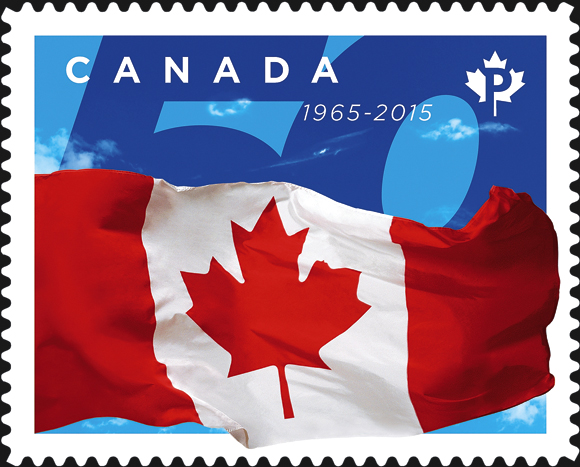 Clean and striking, this “P” (permanent) domestic letter-rate commemorative for the 50th anniversary of the Canadian flag currently has a value of 85¢ and is sold in booklets of 10.

On Feb. 15 — 50 years to the day after it first ran up the flagpole on Parliament Hill in Ottawa, Ontario, Canada — the red Maple Leaf flag was honored by Canada Post with a new domestic-letter rate stamp, postal card and an innovative $5 Flag souvenir sheet.

Measuring 40 millimeters by 32mm, the booklet commemorative depicts the flag against a blue sky shaded with the number “50,” and “1965-2015” to hail its first half-century.

The letter “P” on a white maple-leaf background shows it is denominated for permanent use to prepay a basic first-class letter within Canada. The current rate is 85¢.

A matching domestic-rate picture postal cards showing the flag against a blue sky is item 262428, selling at $2.50 each in the January-February 2015 issue of Canada Post’s Details magazine.

In a size that can’t be missed and a high denomination sure to provoke critics, the new $5 Flag souvenir sheet measures 140mm by 90mm, roughly 5½ by 3½ inches.

Canada Post is billing the souvenir sheet as “Canada Post’s first fabric stamp,” though that may draw controversy, too.

In a nation renowned for pulp and paper, the printing medium celebrating this quintessentially Canadian icon comes from a producer in central Wisconsin.

“Made by Wausau Coated Products,” as Details states, “the print stock consists of a specialized satin rayon fabric applied, using adhesives and silicones, to a paper backer similar to, but thicker than, that used with most postage pressure-sensitive stamps [sic].”

The souvenir sheet includes English and French inscriptions “Commemorating the 50th Anniversary of the Canadian Flag” above and below a 100mm by 50mm $5 Flag stamp inscribed “1965-2015.”

Like the booklet stamp and picture postal card, it was designed by Kosta Tsetsekas and Defne Corbacioglu of Signals, a Vancouver-based design firm.

Details devotes a page to uncut press sheets of 20 souvenir sheets with what look like three all-fabric stamps printed vertically along the right margin of the horizontally formatted sheet.

Marketed in a “Limited edition ... Only 1,000 available,” the uncut sheets are “signed” by “Joan O’Malley, who sewed prototypes of the Canadian flag” in the 1960s.”

Canada Post also reports in Details that the numbered sheets include invisible security ink applied to “areas of the flag.” This ink glows in the dark under a UV lamp.

How it came to be

Although the flag caused heated debate, few today recall why it was so high on the to-do list of newly elected Prime Minister Lester B. Pearson in 1963.

Canada already had a flag. In use since 1868, Great Britain’s Union Jack fills the top-left quarter of this red ensign, with a small coat of arms at right, symbolic of Canada’s British heritage and other founding nations.

The flag machine cancel on a pair of 50¢ stamps (Scott 60) shows a stylized version of the design, adapted for Queen Victoria’s Diamond Jubilee in 1897.

Carried proudly by Canadians from the Boer War to Korea, this banner became a problem during the Suez Crisis of 1956, after Egypt discarded the treaties that kept the canal open, nationalized it, and closed it to Israel.

Pearson, then Canada’s secretary of state, wanted a multinational force under United Nations control to restore peace in the region, and proposed impartial Canadian troops to police the cease-fire.

In the end, Canada sent peacekeepers under the United Nations, and the 1957 Nobel Peace Prize went to Pearson.

But he quietly resolved to make a new Canadian flag a priority when he gained power.

He had a design in mind, too: three red leaves (a nod to the old ensign) for the natives, English and French who created Canada, with blue bars at each end for the Atlantic and Pacific.

The design is shown nearby, beneath two similar Canadian stamps.

At left is a 5¢ stamp for the 1959 bicentennial of the Battle of the Plains of Abraham (Scott 388), the decisive conflict by which Britain took control of Canada from the French. The stamp is an allegory of reconciliation: a British lion on the left, a French fleur-de-lis on the right, flanking a middle leaf for national unity.

At right is the 1964 5¢ Canada Unity stamp showing three red leaves on a pale blue background (Scott 417). Ostensibly the first stamp in a set of Canada’s provincial coats of arms, it’s hard not to see this now as a test balloon for what came to be scorned as “Pearson’s pennant” by its detractors.

To choose a flag, a nonpartisan committee looked at 3,541 designs sent in by the public. Maple leaves appeared on 2,136 of these.

In the end, at the last moment, the committee settled on the proposal of George Stanley, then teaching at Canada’s Royal Military College at Kingston, Ontario.

Stanley had a few simple and wise criteria for his design: It should not divide people, it should be distinctively recognizable, and simple enough that a schoolchild would be able to draw it. And so it came to be.

This tale explains the otherwise rather baffling design of one of the many 46¢ Millennium commemoratives Canada issued in 2000 (Scott 1825c). In the background is Pearson sporting his signature bow tie, while in the foreground a white dove is superimposed on a barely recognizable U.N. emblem in blue.

And now you know the story — and why, in its beak, this dove of peace holds not an olive branch, but a single, red maple leaf.