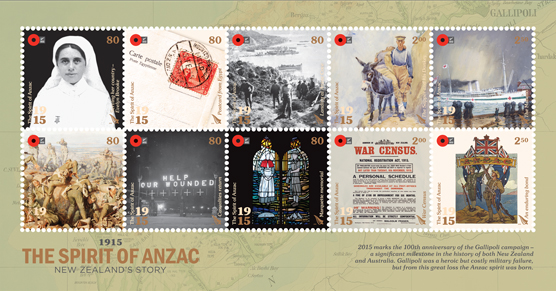 New Zealand to commemorate World War I events that occured in 1915 on the Spirit of Anzac stamps to be issued March 23.

Like many countries, New Zealand is commemorating the events of World War I (1914-1918) in a multiyear stamp series.

The second installment in the New Zealand series is called the Spirit of the Anzac, the Australian and New Zealand Army Corps. The Anzacs landed on Gallipoli peninsula April 25, 1915. Before the Gallipoli campaign was over in December 1915, more than 130,000 men had lost their lives, including 2,779 from New Zealand, about one-fourth of those who served.

On March 23, New Zealand Post will issue 10 stamps, two souvenir sheets and various related products in the Spirit of the Anzac set.

New Zealand Post said, "Through the stamps we tell the story of the Anzac spirit and the realities of war both abroad and at home. After completing their training in Egypt, the New Zealand troops were sent to Gallipoli in what was an ambitious but costly failure for the Allies. The first casualties of war were returning home and it became clear that war was not the 'great adventure' they had envisioned."

The first installment in New Zealand's WWI stamp series focused on events of 1914. Called For King and Empire, this set of stamps was issued July 29, 2014.