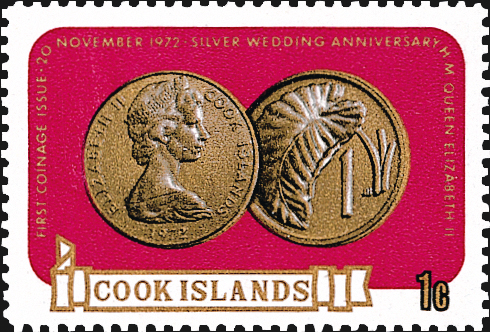 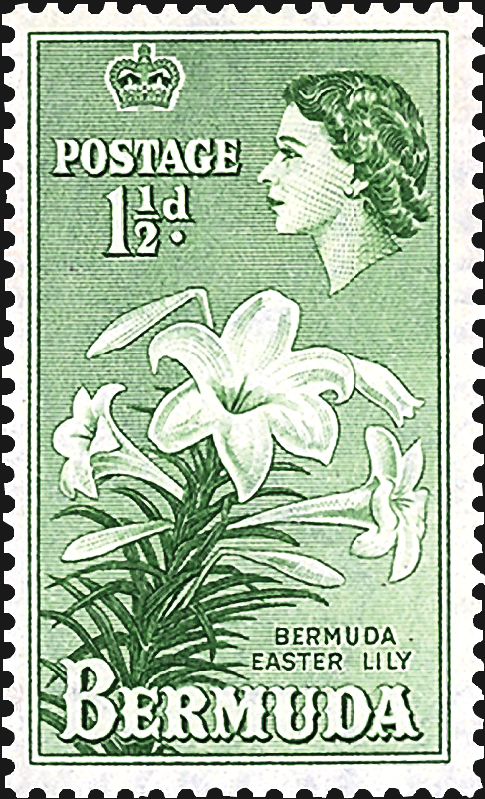 James Berry designed five definitives for Bermuda in 1953, including this Easter lilies subject. 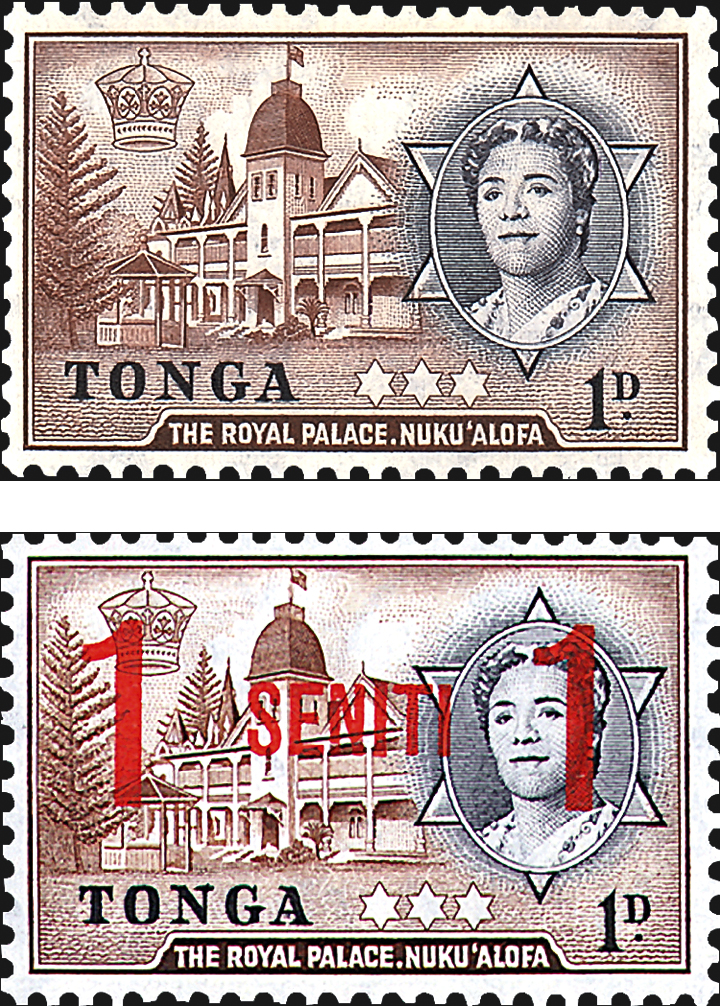 One of a set of 14 James Berry designs for 1953 Tonga stamps, this issue (top) shows Queen Salote and her royal palace. The stamp was surcharged in 1968 in the new Tongan currency, making the 1-penny issue into a 1-seniti stamp (bottom). 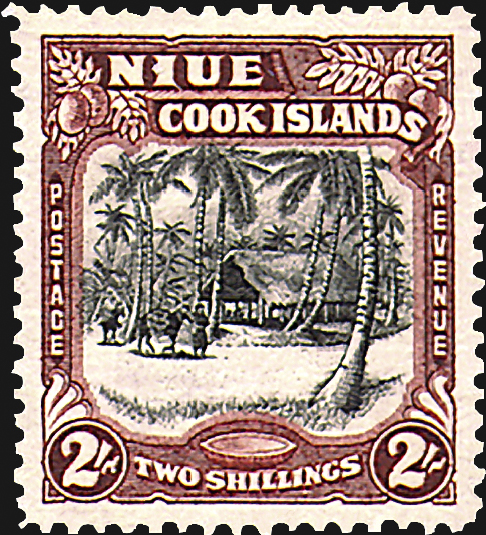 This village scene on a 1938 Niue issue designed by James Berry also was used for a Cook Islands stamp that same year. 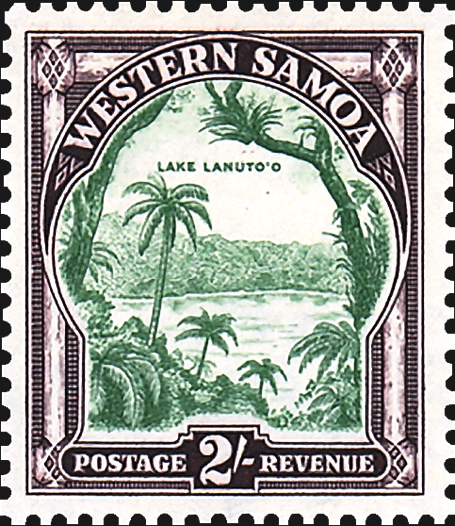 Western Samoa hired James Berry for a set of definitives in 1935. The 2-shilling stamp of Lake Lanuto’o displays his talent for framing his vignettes. 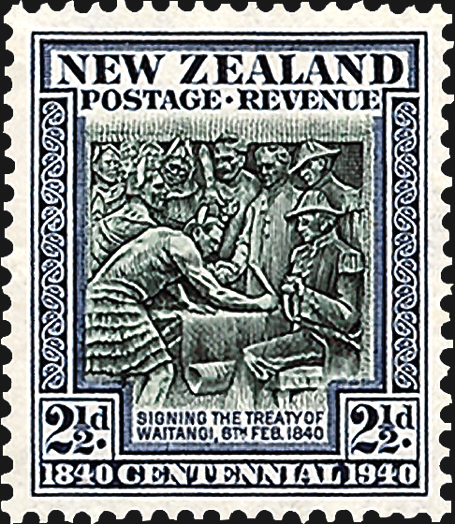 James Berry designed eight of 13 stamps issued in 1940 for the centennial of New Zealand as a British colony. The 2½-pence stamp recalls the Treaty of Waitangi. 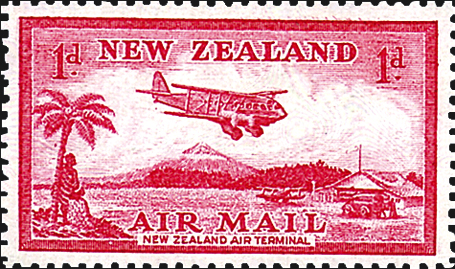 The same design by James Berry was used on all three denominations of a set of 1934 New Zealand airmail stamps. 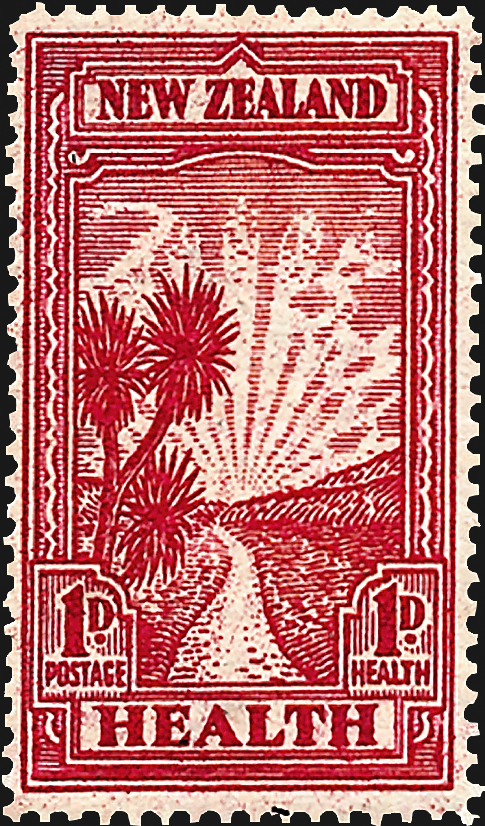 Stamps are miniature works of art.

You have heard this before, but sometimes we collectors take for granted the beautiful images that appear on the stamps we admire so passionately.

It takes a skillful artist to create designs that work in miniature. James Berry was one such artist.

Born Reginald George James Berry in England in 1906, he emigrated to New Zealand in 1925 and worked as a farmhand. By the time he was 21, he was taking commercial art classes.

Berry was unsuccessful in a stamp-design competition in 1932, but his art did get noticed and appreciated.

In 1933, he submitted four designs for New Zealand semipostals known collectively as “health stamps.” A semipostal stamp is one that includes payment for postage plus has an extra charge that is a charitable donation to a specified cause. Berry’s design, titled Road to Health, was accepted and issued as a 1¢+1¢ stamp (1¢ each for postage and charity) on Nov. 8, 1933.

The Road to Health, Berry’s first semipostal stamp, is New Zealand Scott B6, and depicts a winding pathway leading to a bright horizon. Berry’s first Health stamp was not to be his last; between 1933 and 1967 he designed an additional 22 Health stamps.

He based his design on a photograph taken by A.H. Blennerhasset, amending the photo image by adding several new elements: a tree fern with a Maori individual standing beneath it, and the snow-clad Mount Egmont in the background.

Eight of New Zealand’s popular Centennial of British Sovereignty stamps of 1940 were the designs of James Berry. Shown here is the 2½d denomination (Scott 233) that commemorates the signing of the Treaty of Waitangi. The 1840 treaty between the British crown and more than 500 Maori chiefs made New Zealand a British colony, and historians consider this to be the most important event in the chronicle of modern New Zealand. Berry was specifically sought to submit a design for this milestone centenary.

Little more than a decade after his arrival in New Zealand, Berry’s art career was growing. In addition to his day job as a commercial artist and cranking out postage-stamp designs for New Zealand at a rapid pace, he had been asked in 1935 to create designs for medals for the New Zealand Numismatic Society. This led to more medallic commissions, and eventually Berry was hired to design coins and currency.

Berry was granted the contract to design the 1946 set that marked the return to peace at the end of World War II. He submitted 29 designs that were intended to resonate with the people of New Zealand, but he accomplished more than that. The eventual set of 11 stamps (Scott 247-257) received global accolades, and the 9d denomination (257) depicting the Southern Alps seen through a chapel window was voted best stamp of the year in a Stanley Gibbons poll.

In addition to his work for New Zealand, Berry designed definitive stamps in 1935 for Western Samoa, and other island nations requested stamp designs from him: Cook Islands and Niue in 1938, Tonga in 1950 and Bermuda in 1953.

Berry captured the quiet lifestyle of South Pacific villages on a 2-shilling stamp of Niue in 1938 (Scott 74). The same vignette was used that year for a Cook Islands stamp (Scott 113).

Berry’s contribution to Tonga’s stamp history is copious, though inadvertently beyond his original intentions.

From 1950 to 1962, Berry provided beautiful original designs for Tonga, the most spectacular being a set of 14 definitive stamps issued in 1953. The 1¢ denomination (Scott 100) features a portrait of Tonga’s Queen Salote and her royal palace in Nukualofa.

For a variety of reasons, this 14-stamp set of 1953 was overprinted and surcharged repeatedly through 1971, greatly extending the life of Berry’s original designs. For example, the 1-penny Tonga (Scott 100) was surcharged in 1968 in the new Tongan currency to become a 1-seniti stamp (Scott 191).

Bermuda joined the list of Berry’s sponsors by hiring him to provide five designs for a 20-stamp issue of definitive stamps in 1953, including a 1½-penny design of Easter lilies (Scott 145).

In 1973, Berry got to show off two of his skills when the Cook Islands converted to decimal currency and he designed the new coins as well as the stamps that depicted them.

The 1¢ coin on the 1¢ stamp (Scott 339) shows Queen Elizabeth on the obverse and a taro leaf on the reverse.

In 1948, the American journal Weekly Philatelic Gossip called Berry “the greatest postage stamp designer in the world.” He was made an officer of the Order of the British Empire in 1968, and named an honorary member of the Royal Philatelic Society of New Zealand in 1978.

James Berry continued his design career right up until his death in 1979, and he left a legacy of hundreds of beautiful stamps, coins and medals that will please collectors for generations to come.