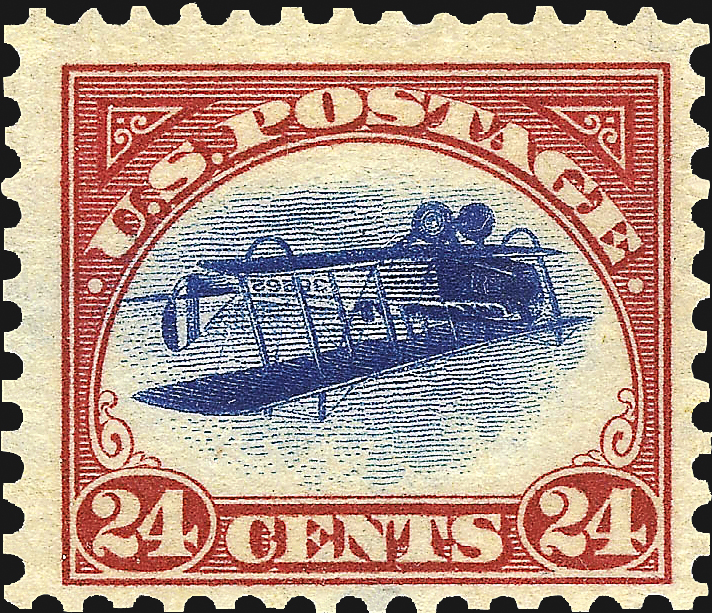 The Feb. 23-24 auction by Robert A. Siegel Auction Galleries will include an example of the 1918 24¢ Jenny Invert airmail error.

An example of the classic American airmail error that inspired a modern-day look-alike is about to go up for auction.

Robert A. Siegel Auction Galleries will offer a 1918 24¢ Jenny Invert stamp when it auctions the Curtis collection of United States 20th-century stamps Feb. 23-24 at its New York City offices.

This example of the famous stamp error with the blue airplane vignette printed upside down in relation to the carmine rose frame (Scott C3a) is from position 19 on the pane of 100 stamps purchased at a Washington, D.C., post office window by William T. Robey on May 14, 1918.

This most well-known of U.S. stamp errors was the inspiration for the $2 Jenny Invert stamp (Scott 4806) issued by the U.S. Postal Service on Sept. 22, 2013, in self-adhesive panes of six.

The 1918 error stamp on offer is described by Siegel as well-centered and remarkably fresh, “lightly hinged, deep rich colors with inverted plane perfectly placed in relation to the frame, choice centering.”

According to the 1986 book Jenny! by George Amick, this particular stamp was exhibited at the British Philatelic Exhibition in South Kensington from Dec. 28, 1946, to Jan. 4, 1947.

The stamp is signed in pencil four times, with the signatures of Bolaffi, A. Diena and Enzo Diena among these. It is also marked with two backstamps, including one of former owner Bernhard D. Forster.

This coil is listed in the designated section for imperforate flat plate coil stamps in the 2015 Scott Specialized Catalogue of United States Stamps and Covers, but with no assigned value.

Siegel explains this pair’s provenance: “Ken Lawrence found this pair in 1997. He submitted it to the A.P.S. for expertizing. Because it has a guide line at top, it was compared to Perf 8½ coils with guide line at top, since these were manufactured the same year with the same equipment. After careful scrutiny by coil specialists, including George Brett, W. Wallace Cleland, Mick Hadley, George Wagner and Larry Weiss, it was determined that the top edge possesses the traits of the coil stamp.”

The stamp comes with its 2002 certificate from the American Philatelic Expertizing Service; it is estimated by Siegel at $10,000 to $15,000.

Also offered is a 1911 cover from Orangeburg, N.Y., franked with the 3¢ deep violet George Washington stamp commonly known as the Orangeburg coil (Scott 389). The stamp has been lifted and hinged to the cover.

It has a 1998 Philatelic Foundation certificate, and with its March 8, 1911, postmark, it is identified by Siegel as the earliest documented use of this rare coil on cover.

The cover (ex-Ward, Southgate and Berkun) is estimated at $27,500 in the auction catalog.

The auction catalog for the Curtis collection sale is posted online at www.siegelauctions.com.