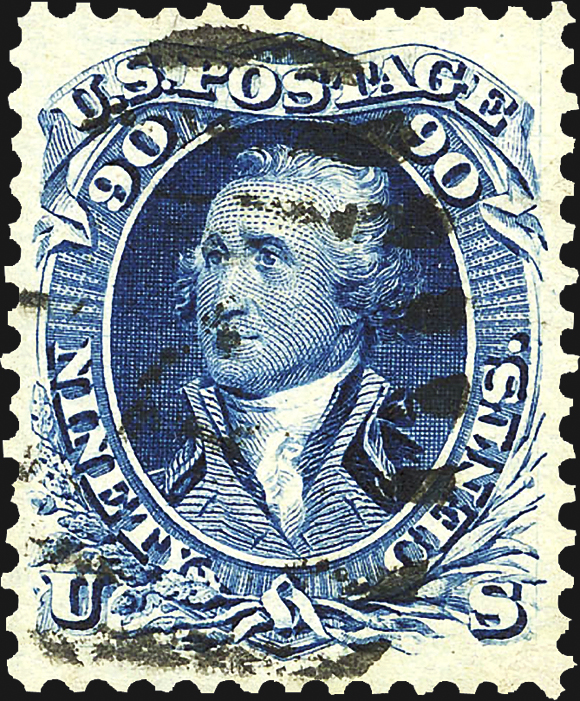 A rare used example of the United States 1875 90¢ blue reissue will be auctioned Feb. 25 by Matthew Bennett in New York City.

The upcoming Bennett auction has one used example of each.

The 90¢ blue on offer is described by Bennett as "perfectly centered within large margins, brilliant, exquisite color and a sharp impression on the whitest of paper, unobtrusive, oval grid cancel. Extremely Fine."

Only three other used examples of the 90¢ reissue have been certified by the Philatelic Foundation, Bennett notes, plus one stamp with a noncontemporaneous cancel, an assessment confirmed by the description in the Scott Specialized Catalogue of United States Stamps and Covers.

This example "may well be considered the finest of these used 90¢ reissues," Bennett adds. Formerly part of the Twigg-Smith collection, it is offered with a 1977 Philatelic Foundation certificate.

"An outstanding jumbo-margined single of one of the rarest used U.S. stamps, two of which have faults," according to the auction catalog description. "The present example is one of the two finest extant."

The stamp is struck with cork cancels and listed as ex-Mayer. It is accompanied by a 1974 certificate from the Philatelic Foundation.

The 242-lot auction concludes with a neat used example of the 1938 red brown and black variety of the $5 Calvin Coolidge stamp from the Presidential definitive series (Scott 834a), plus collections and balance lots.