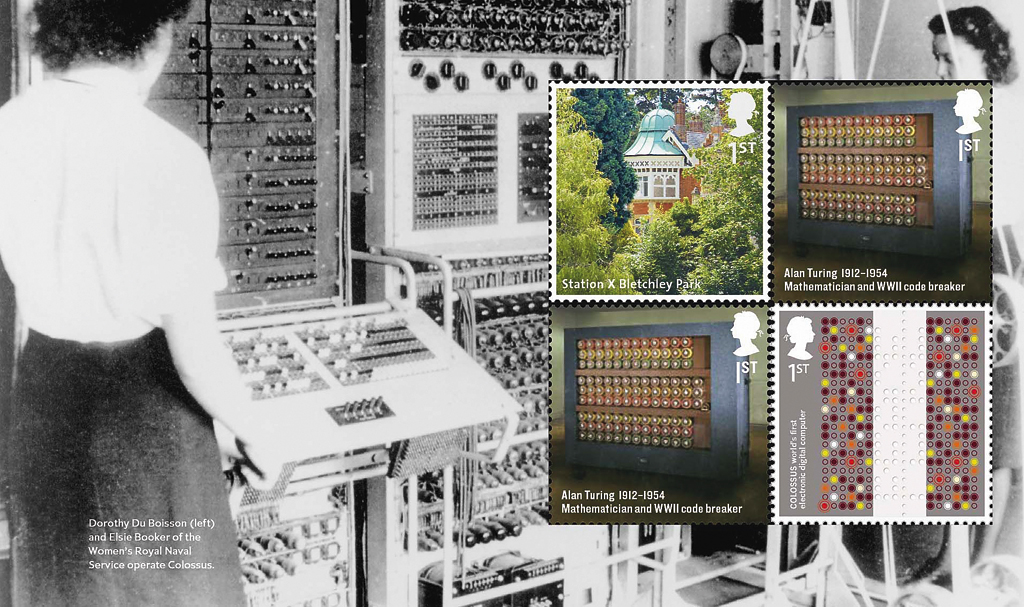 In announcing these stamps, Royal Mail said: “The United Kingdom has a long and rich history as an inventive nation. The Inventive Britain stamp issue celebrates this vital and creative aspect of the national character with eight key inventions of the past century in a range of disciplines and applications, from materials to medicine … ”

Royal Mail added that these inventions “comprise only a handful of the transformative great British inventions from the 20th and 21st centuries.”

In addition to the eight stamps, the Inventive Britain set includes a prestige booklet containing postage stamps along with text and illustrations.

The London-based design firm GBH designed the stamps and the booklet.

The current first-class rate is 62 pence.

Richard Goldstein, in Flowers’ obituary published in the Nov. 8, 1998, The New York Times, wrote: “The Colossus machines were once described by Mr. Flowers as a ‘string-and-sealing-wax affair.’ But they became the capstone of the intelligence operation known as Ultra, which outwitted the Germans and, in the words of Gen. Dwight D. Eisenhower, ‘saved thousands of British and American lives.’”

The Colossus computer is pictured on a page in the prestige booklet, shown below. The inscription on the black-and-white photograph reads, “Dorothy Du Boisson (left) and Elsie Booker of the Women’s Royal Navy Service operate Colossus.”

Another page in the booklet includes a label picturing Flowers.

Software expert Tim Berners-Lee (born in 1955) invented the World Wide Web in 1989 while working for the European Organization for Nuclear Research, known as CERN.

While driving on a foggy night in 1933, Shaw came up with the idea for reflective road studs. He patented his invention the next year, 1934, and set up the manufacturing company Reflecting Roadstud Ltd. in 1935.

Shaw’s cat’s-eyes road studs transformed road safety, and over the years, have saved thousands of lives.

While working at the Standard Telecommunications Laboratories, Kao and Hockham researched the use of fiber optics to carry data, and they presented a paper on the subject in 1966.

Their research eventually led to the digital revolution. The Royal Swedish Academy of Sciences, which awarded a 2009 Nobel Prize in physics to Kao, called fiber optics “the circulatory system that nourishes our communication society.”

Illustrations symbolizing stainless steel and carbon fiber are featured on the pair of £1.28 stamps.

In 1913, Harry Brearley (1871-1948) was experimenting with ways to prevent the corrosion of gun barrels when he fused chromium and steel, creating what is now known as stainless steel.

Silverware was one of the first commercial products made using Brearley’s creation.

The successful formula for carbon fiber was perfected by William Watt (1912-85) in 1964 while he was working on a lightweight but strong material to make aircraft propellers, according to the Royal Society, Great Britain’s scientific academy.

In writing about Watt’s contributions, the Royal Society noted that carbon fiber is still used in the construction of aircraft, as well as in race cars, bicycles, sailboats, golf clubs and sports rackets.

The pair of £1.47 stamps highlight DNA sequencing and the invention of a bionic hand called i-limb.

Frederick Sanger (1918-2013) won his second Nobel Prize in chemistry in 1980 (the first was in 1958) for his “contributions concerning the determination of base sequences in nucleic acids.”

The method he developed of mapping DNA also is called Sanger sequencing.

David Gow (born in 1957) was named commander of the Order of the British Empire in 2014 “for services to upper limb prosthetics.”

He began this work in the 1980s, fitting a Scottish man, Campbell Aird, with the world’s first electrically powered shoulder in 1998. In the 21st century, Gow continued this work with the company he founded, now called Touch Bionics.

The stamps are square, measuring 35 millimeters by 35mm, and are perforated gauge 14.5.

International Security Printers printed them by offset in sheets of 60 (sold in panes of 30 at most postal outlets).

The pane with two 1p, three 2p, one 81p and two 97p Machin definitives has the label showing Tommy Flowers.

The pane with the commemorative stamps includes the aforementioned photograph of Colossus, plus the new first-class stamp marking this invention, two examples of the 2012 Britons of Distinction stamp honoring codebreaker Alan Turing (Scott 3005) and one example of another stamp from 2012 showing Station X at Bletchley Park (Scott 2871). The last-mentioned stamp is part of a set showcasing landmarks of Great Britain in alphabetical order, A-Z.

The film The Imitation Game based on the life of Turing and the code-breaking work at Bletchley Park was nominated in eight categories, including best picture, in the 2015 Oscars.

Eugene Bryne, an author, journalist and historical researcher, wrote the text for the prestige booklet.

Among the other Royal Mail products for the Inventive Britain set are first-day covers, eight postcards reproducing the designs of the stamps, and a presentation pack with text by Lesley Paterson of the Royal Academy of Engineering.