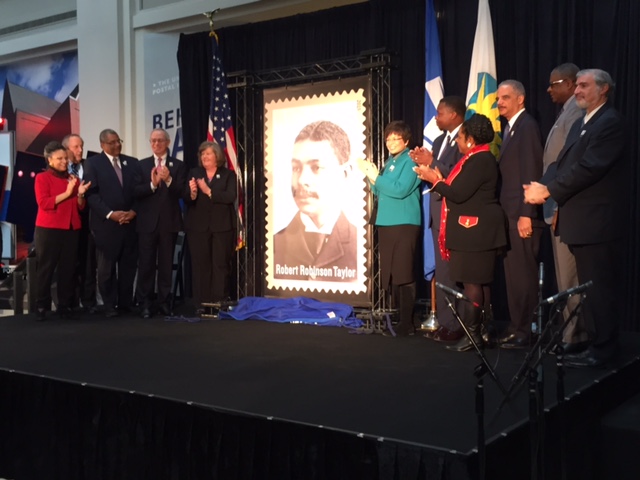 Postmaster General Megan Brennan and Valerie Jarrett, advisor to President Barack Obama, participated in the Feb. 12 first-day ceremony for the Robert Robinson Taylor forever stamp. Brennan is immediately to the left of the stamp image, and Jarrett is

It's not everyday that the President of the United States sends a special greeting to a first-day stamp event.

But then it's not everyday that the United States Postal Service issues a stamp honoring the great grandfather of one of the president's senior advisors.

That's what happened Feb. 12 at the first-day ceremony for the 38th stamp in the Black Heritage Series, which was dedicated at the National Postal Museum in Washington.

It was an A-list event that marked newly installed Postmaster General Megan J. Brennan's first appearance as PMG at a stamp event and a series of speakers who hailed the new forever stamp as a wonderful tribute to the country's first academically trained black architect.

None, however, could top presidential advisor Valerie Jarrett, who told the crowd of several hundred that she often wondered what her great grandfather, the son of a slave, was thinking when he left Wilmington, N.C., in 1882 to attend the Massachusetts Institute of Technology.

"I try to imagine what he was thinking going that far away from home," she said.

That man, Robert Robinson Taylor, became the first African-American to graduate from MIT and a celebrated architect who largely designed the Tuskegee Institute.

"He believed that with a good education, hard work, discipline, relentless dedication and a dedication to family, anything could be accomplished," Jarrett said.

"My family is proud to stand on his shoulders and we know that it is our responsibility to embrace his values, to ensure that his legacy will be 'forever stamped' in the conscious of future generations," she said.

"I sleep a lot better knowing that our Postal Service is overseen for the first time by a woman," she said to applause for Brennan.

The letter she read from President Barack Obama sending "warm wishes to all those gathered to honor the life of Robert Robinson Taylor." Taylor "pushed boundaries and brought an important perspective to this work," the president said.

Jarrett said credit for the Taylor stamp should go to Henry Louis "Skip" Gates Jr., a member of the Citizens' Stamp Advisory Committee and a Harvard University professor.

"I want to tell you were it not for Skip Gates' intense research and dedicated advocacy and passion for my great grandfather, we wouldn't be here," she said.

She also praised NPM director Allen Kane and his staff.

"This is a jewel right here in the heart of the District of Columbia," she said.

The museum opened its latest exhibit in connection with the first-day event.

Curated by Daniel Piazza, the museum's philatelic curator, the exhibit uses stamps and postal items to tell the story of the African American experience.

The exhibit is titled "Freedom Just Around the Corner: Black Americans from Civil War to Civil Rights." It will remain on display until Feb. 15, 2016.

Among the more moving items is an example of slave-carried mail dated April 17, 1850.

"I send you my negro girl Susan aged 16 all rite and first rate girl big limbs and muscles please sell her and remit ..." the letter states.