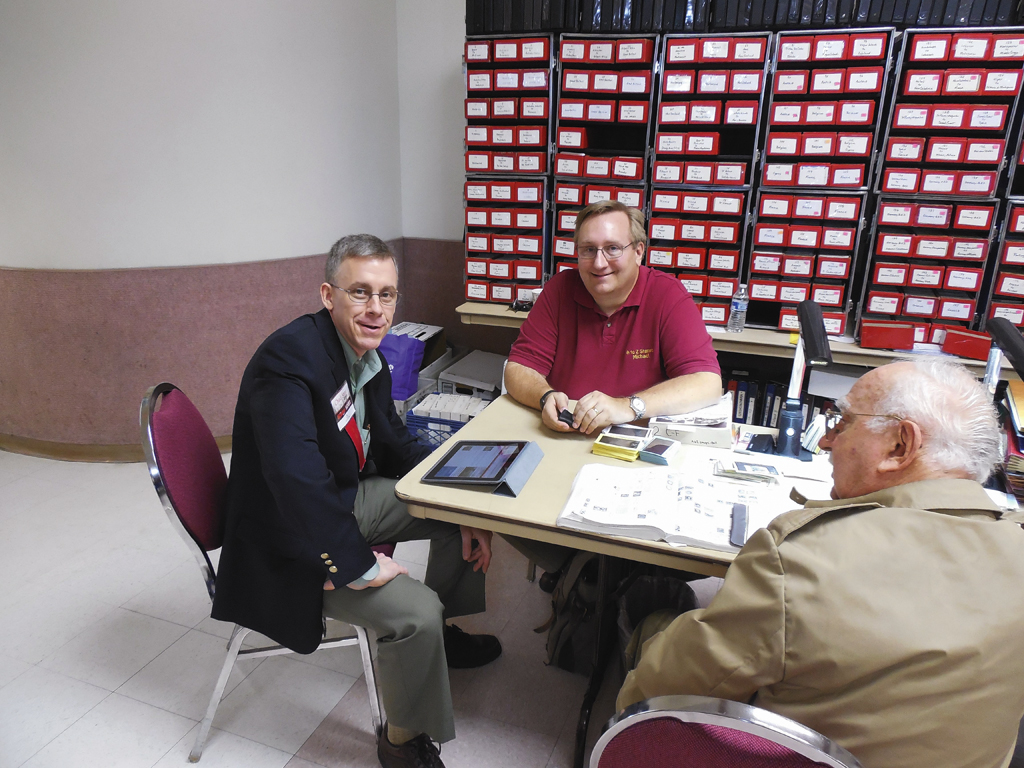 A few weeks back, I had the pleasure of attending the 44th edition of the Sandical show, which took place Jan. 23-25 in warm, sunny San Diego, Calif.

When I arrived in the late morning of Thursday, Jan. 22, it was sunny, with temperatures in the low 70s. I had come from Dayton, Ohio, where snow had recently fallen.

The change in the weather was a pleasant way to begin the trip.

I came out the day before the show opened to participate in a podcast with Professional Stamp Experts president Scott Murphy and his crew.

PSE headquarters is located in Santa Ana, about 90 minutes north of San Diego.

We had an engaging and fun discussion that covered current events in the hobby, as well as happenings with Linn’s and the Scott catalogs.

During my two days at the show, I spent a good deal of time talking to the 20 or so dealers who filled the bourse at the Al Bahr Shrine Center, which has hosted the show for a number of years.

Most dealers told me that they had a good show. A few were disappointed, saying that customers were making mostly small purchases.

“The collectors here in San Diego typically are not big spenders,” one dealer remarked to me.

One of the more colorful stories I heard was from John Star of John Star Stamp and Coin.

I noticed an “all inventory must go” sign on his table when I sat down.

He told me that he was retiring after 52 years as a dealer.

“I got into stamps because I started trading at shows and was close to exceeding the number of trades requiring a license in California,” Star said.

He was one of several dealers at the show who lamented the lack of kids “to replace us older folks.”

An animated, informative discussion with Mike Ball of A to Z Stamps focused on the Scott catalogs. He provided me with a number of useful insights.

Dave Cobb of Newport Harbor Stamp Co. told me that many of his customers are older collectors who are not affected by the economy and can buy better stamps.

He wondered what will happen to the hobby when those collectors are gone.

“I don’t have a single stamp in my investment portfolio,” Cobb said, “but the better quality you buy, the better you will do” when it comes time to sell your stamps.

On Saturday, Jan. 24, I held a town hall meeting to allow show attendees to meet me and ask questions.

Seven collectors, all local to the Southern California area, sat in for a lively chat that touched on the controversial upright Jenny Invert sheet, different configuration possibilities for the six-volume Scott Standard Postage Stamp Catalogue, the Scott eCatalogues, and the growing intersection of the discipline and study of history and stamp collecting.

As time permitted, I wandered up to the second floor of the center, to take in the superb array of exhibits that Sandical exhibits chair Les Lanphear helped bring together.

Two members of the jury, Rich Drews of Illinois and Stephen Schumann of California, pointedly mentioned to me the overall outstanding quality of the exhibits.

Their observations were spot on, because the jury, chaired by chief judge Richard McNamee of California, awarded gold medals to approximately two-thirds of the 40 or so exhibits on display.

I would be remiss if I did not give a shout-out to the Sandical officers and committee members who showed me great hospitality during my entire visit.

A tip of the hat to the cheerful leaders of the show: president Linda Mabin, vice president Tony Price, secretary George Kaler and treasurer Bob Eygenhuysen.

All of you made this collector from the Buckeye state feel right at home.