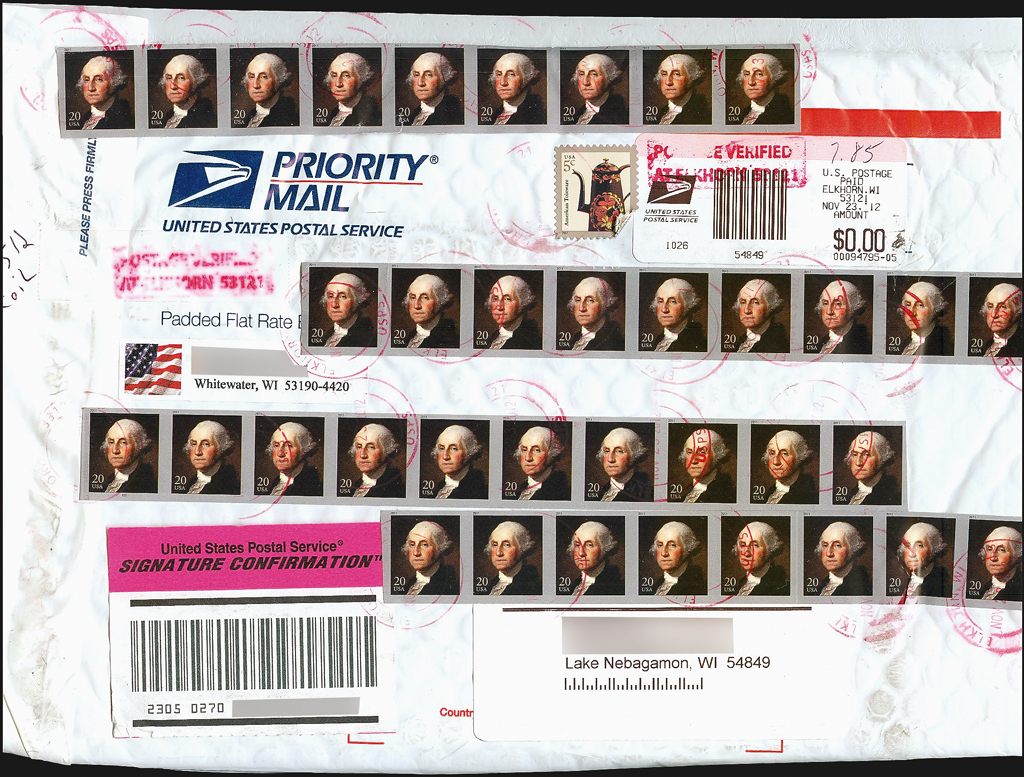 This Priority Mail flat-rate padded envelope was mailed in 2012 with 39 20¢ George Washington coil stamps with all die cuts omitted. The error stamps are applied in four separate strips, with some wrapped around the right edge and onto the back of

A newly discovered die cut-omitted (imperforate) error of the 2011 United States 20¢ George Washington coil stamp (Scott 4512) has been reported by a stamp collector in Wisconsin.

Clyde Ekar has a large Priority Mail flat-rate padded envelope franked with 39 examples of the imperforate Washington stamp plus a single 5¢ American Toleware Coffeepot sheet stamp. The postage totals $7.85, an apparent payment of the $5.30 Priority Mail padded envelope flat rate in effect during most of 2012, plus the added $2.55 fee for signature confirmation.

The stamps are postmarked with a handstamp dated Nov. 23, 2012, and the package also bears a zero-value U.S. Postal Service PVI (postage validation imprint) label with the same date.

That label is struck with a red handstamp, “Postage Verified at Elkhorn 53121,” which means the postage on the envelope was checked and verified by a post office clerk before the package was mailed from Elkhorn, Wis., to Lake Nebagamon, Wis.

The image shown here, provided by Ekar, is cropped slightly at right. Ekar confirms that the parcel is franked with one strip of nine and three strips of 10 of the error stamp, and that the ends of some of these strips are wrapped around the right edge and continue onto the back of the parcel.

This is the first report of an imperforate error on the 20¢ George Washington coil, which was issued April 11, 2011.

A pane of 20 20¢ George Washington stamps with the same design (Scott 4504) was issued on the same date.

The error stamps on the envelope can be identified as coils in part because of the plate number P22222 visible on the first stamp at left in the third strip on the package (directly below the sender’s flag-decorated return address label).

The envelope was examined by the American Philatelic Expertizing Service in Bellefonte, Pa., which rendered this opinion: “United States, Scott No. 4512, strips of 9, 10, 10 and 10, die cut omitted error, used on priority mail cover, genuine in all respects.”

Ekar told Linn’s Stamp News that he received the envelope in the mail, filled with circuit books from the American Philatelic Society that were being forwarded by another collector.

“When I received it, I didn’t think anything of it,” Ekar said. “I save covers, so I just put it away.”

Two or three months ago, he said, he was looking through his covers and noticed the coil stamps had no die cuts and were cut apart in strips of nine and 10.

That’s when he sent the envelope in for expertizing.

Ekar added that he has tried to reach the collector who sent the package to see if he can add to the story — or if he happens to have any of the mint stamps remaining — but with no luck.

Charles Snee, editor of the Scott catalogs, said the new error will be listed in the 2016 Scott Specialized Catalogue of United States Stamps and Covers.