What can the USPS do to better promote the stamp program? 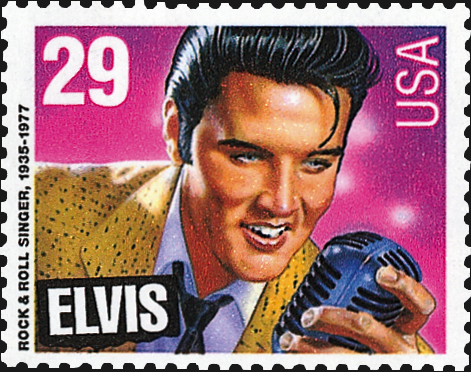 The public decided whether a young or older Elvis Presley would appear on a stamp. The young Elvis won, as shown on this 1993 stamp. John Hotchner suggests that the Postal Service get the public more involved in the stamp program. 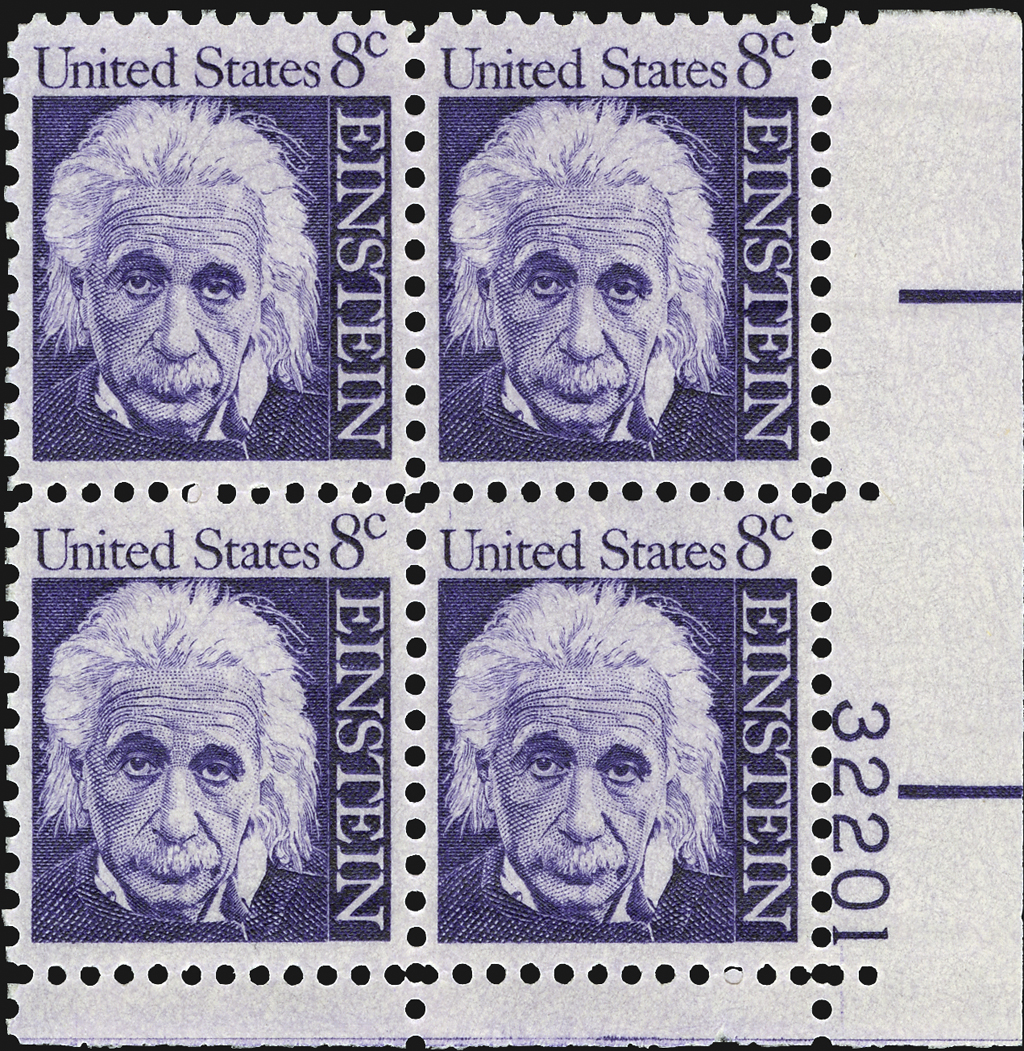 John Hotchner proposes that the USPS restore plate numbers on stamps to their original meaning of a new number when a new plate is used. The 8¢ Einstein stamp was issued in 1966. 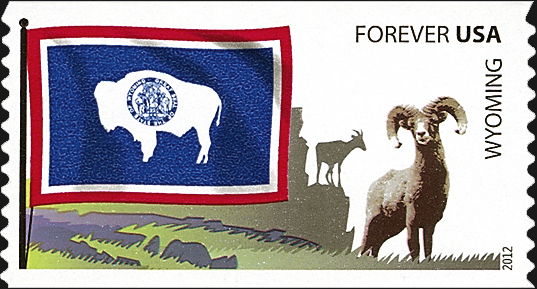 John Hotchner recommends that the USPS limit the number of different stamps on any subject to four, with exceptions made for special series, such as those featuring presidents or flags that are issued over time. For example, the Flags of Our Nations co

I’m one of three former members of the Citizens’ Stamp Advisory Committee who signed open letter to the new postmaster general, Megan Brennan, regarding the United States stamp program.

While the letter is critical of how the U.S. Postal Service has managed the stamp program of late, and the trajectory of the program, it is not intended as a condemnation. There is much about the stamp program to like.

But in some ways, it has gone off the rails, especially with regard to the overall gravitas of the subjects portrayed.

In addition, there is little regard for the stamp collector community as an important customer because the Postal Service, being the sole supplier of the items we collect, really need not give much consideration to what we want.

The fact is that we do have another alternative, and increasing numbers of collectors are opting for it. That is to drop out of collecting modern material — or drop out altogether.

That is neither in the interest of the Postal Service or the hobby. In addition, we simply don’t know what the impact is on potential collectors who are opting not to start.

In this column, I want to address this problem with some thoughts about actions the USPS might take to reverse this trend, by promoting stamp collecting without injuring their bottom line.

The objective is to broaden the base of collectors buying U.S. stamps, and to provide more products (not necessarily more stamps) that have been popular with collectors in the past.

The following proposals are presented in no special order.

1. Most U.S. stamps are now issued as self-adhesive. It is what the public wants, and the USPS is right to be responsive. But self-sticks are more expensive to produce, and a sizable majority of them will not soak off envelopes once used, which at best annoys collectors.

If the Postal Service cannot or will not fix this problem, I would like to see it issue stamps that are targeted to collectors (such as commemoratives, souvenir sheets, and so on) with lick-and-stick gum.

2. Issuing 20 stamps on almost any given subject is a naked raid on collector wallets. Limit the number of different stamps on any subject to four, except in the rare instance where U.S. presidents or state flags are being honored. And even there, issuing these stamps over time, as was done with the Flags of Our Nation coil stamps featuring the state flags, is desirable.

4. The USPS should not be dictating to CSAC to the degree it has been in the recent past. Pop culture and light subjects have their place, but if popularity and salability of the product were the only considerations, there would be no need for CSAC. The professional staff could figure out all by itself what will sell best.

Thus, CSAC’s function is not principally to pick the easy subjects, but to make certain that subjects of consequence are liberally included in the mix year after year.

5. Plate number coils were and remain a huge hit with collectors. Why not extend this to putting a plate number on one stamp per booklet and even stamps issued in sheet form.

6. While on the subject of plate numbers, the Postal Service should restore plate numbers to their true meaning: a new number when a new plate is used.

7. Except for unusual circumstances, the Postal Service should not repeat subjects within a 25-year period. It is self-evident that there are far more worthy subjects than slots in the stamp program, yet subjects are repeated because of political pressure, (President Ronald Reagan for example) or because they are expected to be big sellers (Batman).

8. If the USPS can’t find money to merchandise the product, it needs to find ways to better use the Internet, especially in the realm of putting the stamp program before the public; not waiting for the public to come to the USPS.

9. The Postal Service is the only major retail organization in the United States where the sales staff does not know its own products or the importance to the USPS of promoting its philatelic products. Too many postal employees treat collectors as nuisances, and/or seem to take delight in ruining collectable stamps with heavy cancellations.

The USPS needs to train window clerks and back-office supervisors and managers to understand that stamp collectors help to pay their salary with stamps as a profit center potentially worth hundreds of millions of dollars each year to the Postal Service.

10. The Postal Service should look to the history of U.S. definitive (regular-issue) stamps that have brought people to the hobby and kept them there. These stamps are issued in a series with a consistency of design over a long period of time.

Every stamp does not need to be a clone of the others, such as the Presidential series of 1938 or the Transportation coil series that began in 1985. But if you look at definitives of the last 20 years, there has been little series identification and even less design consistency, with a few exceptions. Thus, to the degree possible, every regular-mail stamp should be created to be part of an identifiable series.

11. As demonstrated by the Transportation coils, it is desirable, though not essential, to make different forms (coils, booklets, sheet stamps) into differentiable series.

12. The Postal Service should consider the use of sheet margins and coil and booklet packaging to provide more information about the stamp subjects, include quotes from living people about them, and even tasteful advertising. Other countries have done this without damaging their reputations, and it could be a huge source of revenue.

13. Given the difficulty of rendering a thought, event or the essence of a person in a small space, U.S. stamp designs are, to me, a high point of the stamp program. And yet, there are instances where designers seem to lose sight of what is clear and comprehensible art, in favor of being “edgy” or trying to tell the public what they should appreciate.

14. The USPS should have on its website a section for youth that goes far beyond the very well done Beyond the Perf feature that was inaugurated several years ago.

Young people are the customers and mail users of tomorrow, and many of them are so into the Internet that they have never been inside a post office, and don’t write letters beyond (perhaps) an occasional thank you note.

The objective of this youth section has to be more than selling stamps. It would need to entertain to draw kids in, have content they can’t get anywhere else and have enough substance to help them gain an understanding and appreciation of the role of the USPS in the development of the United States, and its potential utility as they reach adulthood.

There are hundreds of ideas for content, but one important one would be to find among today’s sports, political and media personalities people who collect stamps and will agree to be interviewed so that stamps and stamp collecting can be held up as “cool” rather than the preserve of nerdy older people, which has become the image.

15. The Postal Service should do more to involve the public in the stamp program by asking what they would like to see honored on stamps. While the Postal Service would make no promises, the results could be useful as a guide.

Let the public vote on competing stamp designs as was done with considerable free publicity when the 1993 Elvis stamp was being developed.

The public should think of themselves as stakeholders in the stamp program.

16. The USPS should consider building on the successful limited edition press sheets concept. Not every collector likes press sheets, but enough do to make it worthwhile.

Why not try an occasional limited edition progressive color proof set (showing how the final design is achieved by a succession of colors) available by lottery. Let collectors vote with their wallets.

Yes, doing many of these things will require staff, other resources and investment.

The USPS is governed by a yearly budgeting cycle, which tends to limit creativity and investment because the emphasis is always on short-term income and short-term cost reduction. This needs to change so that like other major corporations in America, the USPS integrates the concept that it needs to spend money up front to make more money in the long term.