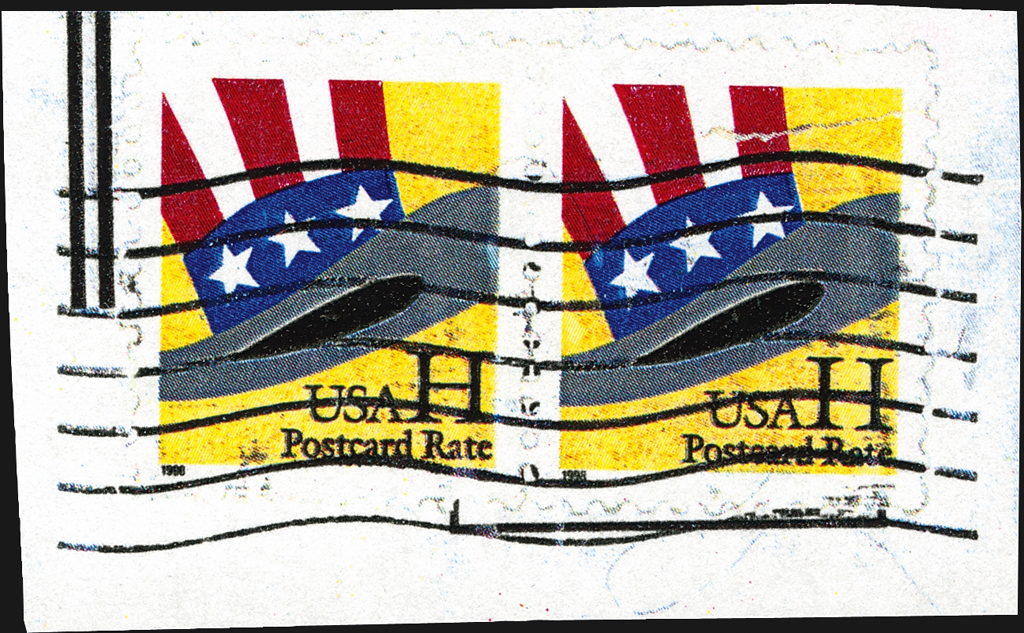 A pair of the unissued 1998 Yellow Hat stamps on piece, found in a mixture of postally used U.S. stamps.

Collector Joseph Monaco got a nice surprise a few years ago while looking through a mixture of used United States stamps.

He came upon a clipped piece of envelope paper affixed with two familiar looking H-rate stamps from 1998, showing Uncle Sam’s red, white and blue hat prominent in the design. However, the background of the design on these stamps was a bold yellow; on the regularly issued H-rate stamps for the first-class letter rate, the background behind the hat is solid white.

The stamps he found are unissued “Yellow Hat” stamps, with the inscription “Postcard Rate” near the bottom. The stamps with the yellow background were printed by the U.S. Bureau of Engraving and Printing and delivered to the U.S. Postal Service beginning in 1997, but were never officially issued.

However, used Yellow Hat stamps began to surface on mail in the fall of 1999, starting with two stamps found on a cover mailed in upstate New York.

Many of the used stamps found since then are struck with a red round postmark from Greencastle, Ind., dated between June 1999 and October 2001.

Linn’s has been reporting discoveries of the Yellow Hat stamps since the first examples surfaced.

Counting Monaco’s newly reported pair, Linn’s census of Yellow Hat stamps in public hands is now 234. Of these, 105 are in mint condition. The largest known unused multiple is a block of 20 with no margin paper.

Monaco spoke with Linn’s about his find in late February.

Many of the stamps in the mixture had Cincinnati postmarks, Monaco recalled, but a few were postmarked in Indiana.

The stamps he found are still on the paper backing, clipped years ago from what appears to be a business reply envelope. Segments of the envelope’s preprinted facing identification marks, small vertical bars in the stamp area, are visible next to the stamp at left.

That’s how Monaco found them, with simple black wavy bars of the postmark crossing over each stamp and tying them both to the piece.

The right stamp of the pair appears to have a small horizontal fault in the upper section of the design, Monaco noted. Many of the used stamps previously reported have been described as having some sort of fault.

A press sheet of the Yellow Hat stamps put on display by the National Postal Museum in 2013 consists of eight panes of 20 stamps. The museum’s display piece is not counted in Linn’s census.

The unissued Yellow Hat stamp is pictured and noted but not listed after Scott 3269 in the Scott Specialized Catalogue of United States Stamps and Covers. The catalog states, “There is no evidence that these stamps were ever officially issued.”