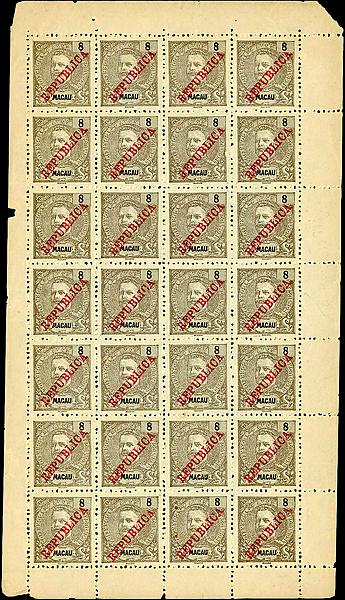 Macau overthrew the Portuguese monarchy in 1910 and added “republica” overprints to the existing King Carlos stamps. Harmers sold a mint sheet of 28 of the overprints for $36,600.

Harmers in Switzerland hammered down this mint Italian triptych for the return flight of Italo Balbo from Chicago’s 1933 Century of Progress for $24,400. The auction was conducted Nov. 14-15.

Gen. Italo Balbo was a key figure in Italy’s fascist regime, a mastermind of the 1922 March on Rome, although he later opposed the anti-Jewish racial laws and the alliance with Hitler.

Balbo established the Italian Royal Air Force in the 1920s. To promote Italy’s air prowess, he led a squadron of seaplanes on a trans-Atlantic flight to the Century of Progress exhibition in Chicago during the summer of 1933.

Landing on Lake Michigan to much fanfare, Balbo was hailed in America as a second Christopher Columbus, and invited to lunch by President Franklin D. Roosevelt.

Italy issued two se-tenant triptychs to commemorate the flight, consisting of a registered air express label, a regular postage stamp and an airmail stamp (Scott C48-C49). The labels on the left were each overprinted with the abbreviated name of one of the 20 pilots.

For Balbo’s return flight, 500 examples of the 44.75-lira airmail stamp were overprinted “Volo di Ritorno/New York-Roma,” but the triptych for the return flight was not issued, even though the flight took place and mail carried on it was franked with regular United States stamps.

A mint, never-hinged return-flight triptych in the Harmers sale was hammered down for the equivalent of $24,400, including the 20 percent premium added by Harmers to all lots.

Seen by many as heir apparent to Mussolini, Balbo was made governor of Libya in 1933, supposedly to sideline him. He was killed in 1940 when his plane was shot down over Libya by friendly fire. A monument to Balbo, crafted from a 2,000-year-old Roman column, still stands in a Chicago park, the sole remaining structure from the 1933 exhibition.

The small Portuguese colony of Macau, off the coast of China near the mouth of the Pearl River, used colonial-type stamps for the entire period covered by the Scott Classic Specialized Catalogue of Stamps and Covers 1840-1940. After the monarchy was overthrown in 1910, stamps depicting King Carlos were overprinted “Republica” diagonally in red, both in Lisbon and locally.