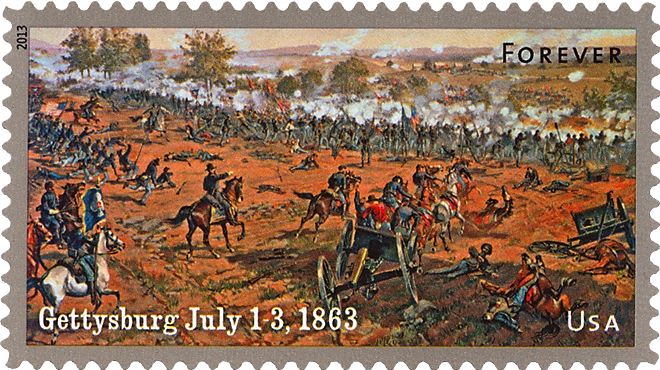 The Battle of Gettysburg, which included the ill-fated "Pickett's Charge," was commemorated on a forever stamp in 2013. Maj. Gen. George E. Pickett was born Jan. 25, 1825.

There is some disagreement about the birthdate of George Edward Pickett, the Confederate general known for his role in "Pickett's Charge" during the 1863 Battle of Gettysburg. An imposing memorial at his gravesite in Richmond, Va., records his birthdate as Jan. 25, 1825, though the date Jan. 16 reportedly appears on his certificate of baptism.

Pickett received a West Point appointment at age 17 and served with distinction in the Mexican-American War. At the onset of the Civil War, he resigned his U.S. Army commission and served in the Confederate States Army, achieving the rank of major general in 1862.

His division arrived at Gettysburg after the battle had been engaged, and mounted an offensive against Union lines on July 3. Losses were heavy on both sides, but the assault proved disastrous for the Confederacy, with nearly half of Pickett's division decimated.

The Battle of Gettysburg was commemorated in 2013 on a forever stamp in the Civil War Sesquicentennial series. The Library of Congress notes that the scene shows Maj. Gen. Winfield S. Hancock riding along the Union lines during the Confederate bombardment prior to Pickett's Charge.

Pickett's Charge is also mentioned in text printed on the reverse of United States Scott 2975t, the 32¢ Gettysburg stamp from the 1995 Civil War pane of 20.