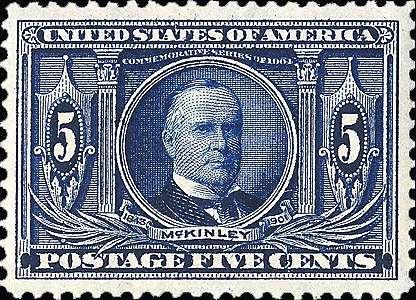 William McKinley, the 25th president of the United States, was born Jan. 29, 1843. His first U.S. stamp appearance was on the 5¢ stamp in the 1904 Louisiana Purchase Exposition set.

Born Jan. 29, 1843, in Niles, Ohio, William McKinley served in the Union Army during the Civil War.

As the Republican candidate for president he defeated the Democratic populist William Jennings Bryan in the election of 1896 and again in 1900. He led the country during the Spanish-American War, and the nation enjoyed prosperity and growth during his presidency.

His life was cut short, however, early in his second term, when he was shot by an assassin on Sept. 6, 1901, while visiting the Pan-American Exposition in Buffalo, N.Y. Though recovery for the president seemed possible, he died of complications from the shooting eight days later and was succeeded by his vice president, Theodore Roosevelt.

During his presidency McKinley had signed a bill authorizing funding for the upcoming Louisiana Purchase Exposition in St. Louis, Mo., and the set of five stamps issued April 30, 1904, to commemorate the fair included a 5¢ stamp memorializing McKinley, with a portrait engraved by George F.C. Smillie (Scott 326).

McKinley has been honored on several U.S. stamps over the past century, and in 1928 he was depicted in the vignette on the U.S. $500 bill.