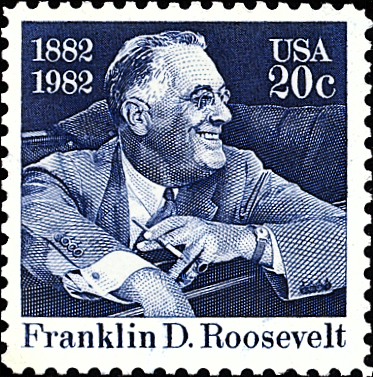 Franklin Delano Roosevelt, born Jan. 30, 1882, was elected president of the United States for four consecutive terms, and served in that office for more than 12 years, from his first inauguration on March 4, 1933, until his death on April 12, 1945.

He led the nation through the Great Depression and World War II while engaged in his own personal battle against the effects of the polio he contracted in 1921, and which left him partially paralyzed, unable to walk unaided.

Roosevelt treasured the relaxing challenge he found in stamp collecting, and devoted time to his favorite hobby nearly every day. He was also very involved in the development of the nation's stamp program, and contributed design ideas and offered suggestions for U.S. commemorative stamps that were printed and issued, including the 1937 5¢ Virginia Dare issue (Scott 796), the 1940 3¢ Pan American Union issue (895), and others.

Just two months after his death, on June 27, 1945, the U.S. Post Office Department issued a 3¢ purple memorial stamp for the fallen president showing Roosevelt and the White House. Three more stamps followed in the same set over the next few months (Scott 930-933).

Many nations issued stamps that show Roosevelt working on his stamp collection, including a 50-centime violet airmail stamp from Monaco in 1947 (Scott C16), and a set of three stamps plus a souvenir sheet issued by the Philippines in 1950 (542-544, C70).

Many U.S. stamps pay tribute to Roosevelt, including a single blue 20¢ commemorative honoring FDR in 1982 on the 100th anniversary of his birth (Scott 1950).