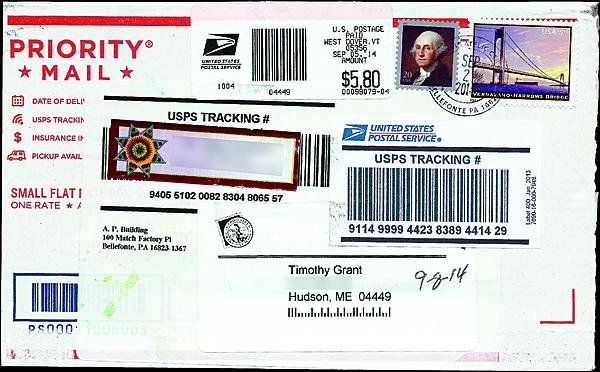 This flat-rate Priority Mail box appears to have twice the amount of postage required to mail it. In fact, it was mailed twice: first with 20¢ and $5.60 postage stamps, then with the United States Postal Service $5.80 postage validation imprint.

One of the many nice benefits of membership in the American Philatelic Society is receiving, upon request, circuit books of stamps and covers from the APS sales division.

A group of sales books is mailed from the APS using a small Priority Mail flat-rate box to the first APS member on that circuit’s mailing list.

The member pays for any purchases from the books, and then sends the circuit on to the next member.

The last member on the list then returns the circuit to the APS.

Not long ago, Tim Grant of Maine sent me a nice picture of a small Priority Mail box that was initially sent by the APS to a member in Vermont.

To the left of that franking is a U.S. Postal Service postage validation imprint in the amount of $5.80 — the same total as the two stamps combined.

When I first saw this item, I was a bit confused, because it appeared that postage had been applied twice in error.

Grant’s explanation accompanying the picture of his cover helped clear away my misunderstanding.

“At first glance,” Grant began, “it seems to be a highly overpaid small flat-rate box.

“But upon closer examination it turns out to be a reused flat rate box that was originally mailed using stamps and reused and mailed with a meter strip that the servicing post office was kind enough to not cover the stamps with.”

A close look reveals that the box was first mailed from the APS Sept. 2, 2014, using the two stamps.

The recipient in Vermont then reused the box by covering the APS mailing label with his return address label and affixing the mailing label the APS provided to send the circuit to Grant in Maine.

He then mailed the box to Grant Sept. 5 using a postage validation imprint in the amount of $5.80.

The end result is a nifty piece of double-duty postal history.