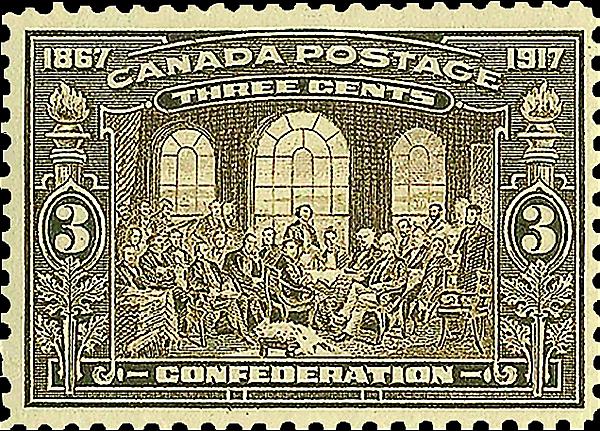 John A. Macdonald is among the “fathers of Confederation” shown on this 1917 3¢ brown stamp marking the 50th anniversary of Canadian Confederation. The same painting is shown in green on a 1927 2¢ commemorative stamp. 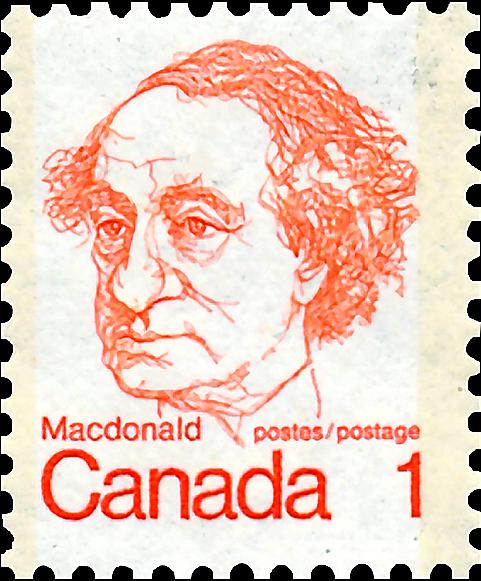 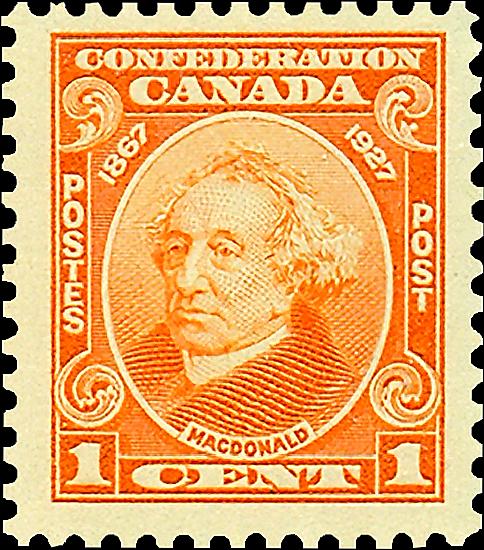 Prime Minister John A. Macdonald was previously honored on a 1927 1¢ stamp issued for the 60th anniversary of the Canadian Confederation (Scott 141). 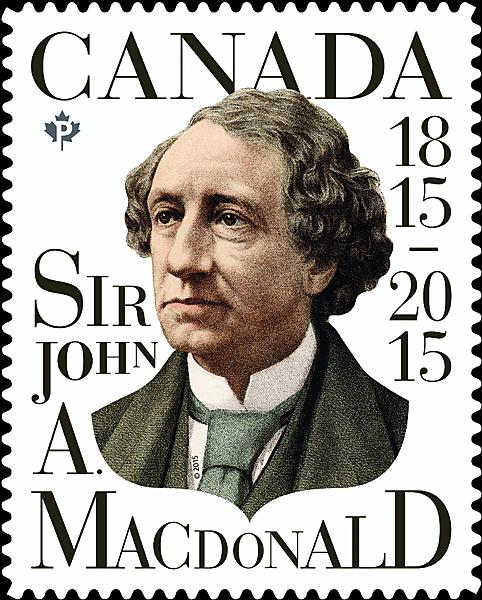 Chopra said: “Our stamps have captured the story of Canada ever since Confederation and today we celebrate one of its key architects.

“Two hundred years after his birth, Sir John A. Macdonald remains a towering figure and this stamp celebrates his legacy.”

In the press release announcing the stamp, Canada Post called Macdonald “a nation builder whose achievements shaped the nation.”

Canada Post reports that the “stamp mixes a traditional photo with modern design to create a fresh look at a subject who has appeared on stamps many times over the past 100 years.”

Macdonald also is depicted with Prime Minister Wilfred Laurier on a 1927 12¢ stamp (Scott 147).

He is among “The Fathers of Confederation” pictured on stamps from 1917 (Scott 135) and 1927 (Scott 142) marking the 50th and 60th anniversary of confederation, respectively.

The stamp designs of these 1917 3¢ brown and 1927 2¢ green commemoratives are based on a painting by Robert Harris of the Charlottetown Conference held in September 1864.

The stamp also is available affixed to an official Canada Post first-day cover canceled in Kingston, Ontario. The cover features a line map of the provinces that constituted Canada at confederation.

Born Jan. 11, 1815, in Glasgow, Scotland, Macdonald immigrated to Kingston, Ontario, at age 5 with his parents, Hugh and Helen Macdonald.

He began practicing law at the age of 20, and entered politics in 1843 as an alderman in Kingston. The next year, 1844, he was elected to the Legislative Assembly of the province of Canada.

In 1856, he became joint premier of the province. One of the “fathers of Confederation,” he played leading roles during the Charlottetown and Quebec conferences that led to the creation of Canada in 1867. That same year, Macdonald became Canada’s first prime minister, a post he would hold for a total of 19 years (1867-73 and 1878-91), before his death in office on June 6, 1891.

He was knighted by Queen Victoria in 1867.

A biography of Macdonald on the government of Canada’s website sums up his years in office: “Sir John A. Macdonald is remembered for his role in: the expansion of Canada’s boundaries from sea to sea, the completion of the Canadian Pacific Railway, the creation of the North-West Mounted Police, and the development of the National Policy. Not without controversy, his career also included the Pacific Scandal, which led to the downfall of his government, and his handling of the North-West Resistance in 1885, which cost his government substantial support in Quebec. He died on June 6, 1891, soon after winning his fourth election.”