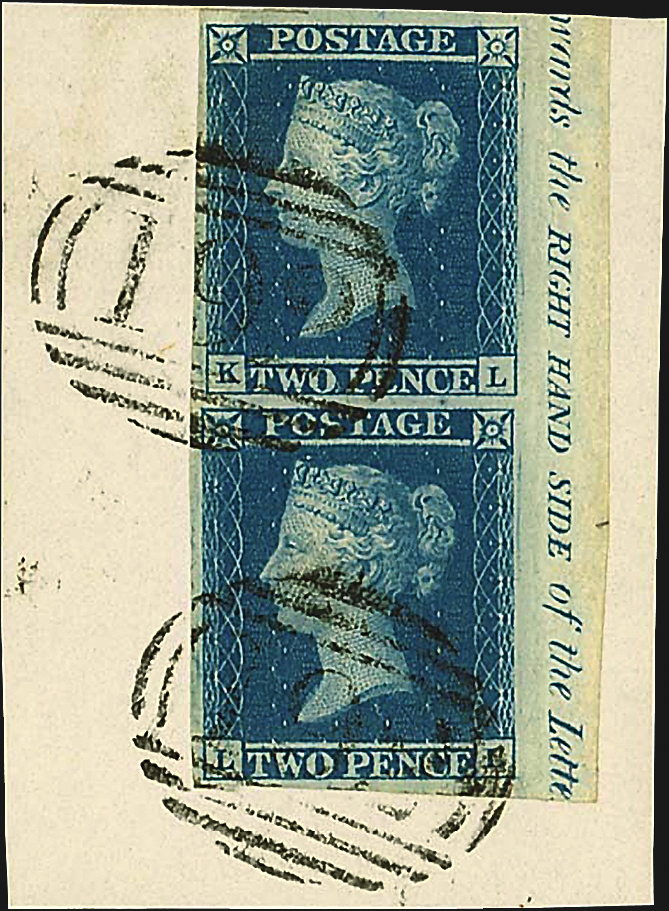 A vertical sheet margin pair of the 1841 2d blue on piece is offered by Spink London during the Jan. 27 auction. 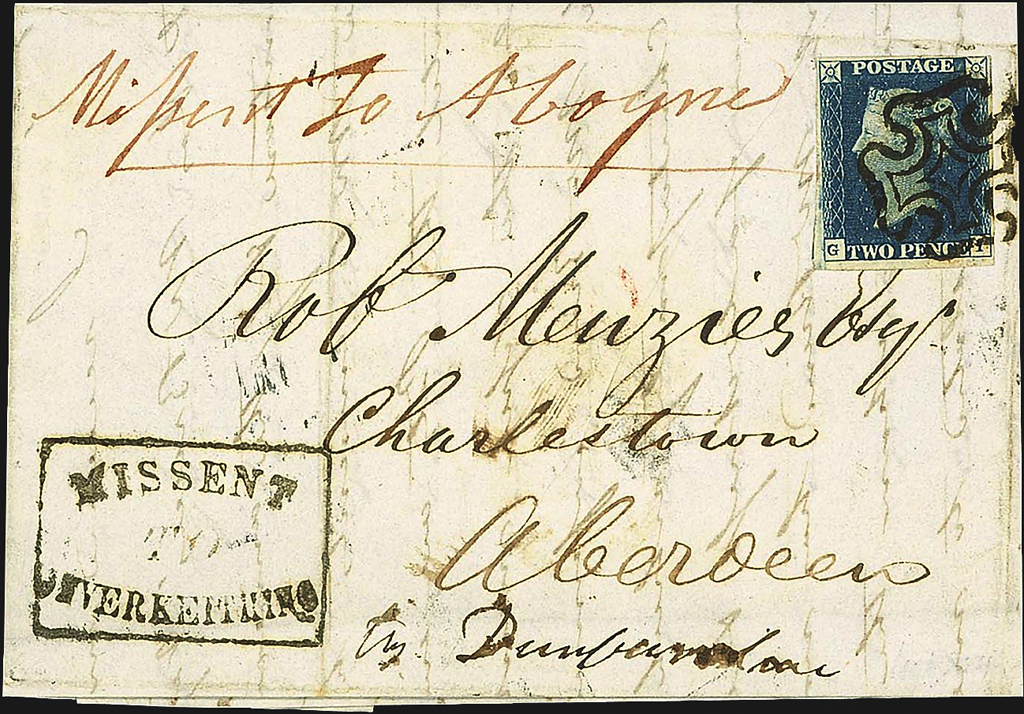 An 1841 cover franked with 1840 2d blue stamp has two “missent” markings (one stamped and one in manuscript) on its front, and evidence of its travels on the reverse. The cover is offered by Spink London as part of the Jan. 27 “Robert Wallace” collection auction.

Spink London will offer the “Robert Wallace” collection of Great Britain line-engraved stamps, including stamps on cover and on piece, during a Jan. 27 auction.

Spink points out that the auction is named after “the famed Scottish postal reformer and close colleague of Rowland Hill.”

The items in the 330-lot sale were “collected over many years,” with “a fine eye for both quality and rarity.”

The examples include many with Maltese Cross cancellations in a wide range of colors and varieties, plus town cancellations and more.

A featured lot is the 1840 2d stamp in a deep blue shade from plate 2, with corner letters GI.

The stamp is tied to an entire letter (addressed to Aberdeen and dated Nov. 12, 1841) by a black Maltese Cross cancellation.

A red manuscript marking reads “Missent to Aboyne,” and at lower left is a black boxed message, “Missent to Inverkeithing.”

Evidence of the letter’s travels include dated backstamps of Aboyne, Inverkeithing, Aberdeen and Dunfermline, the latter as a result of a manuscript “Try Dunfermline” on the letter front.

A handsome vertical sheet margin pair of the 1841 2d blue, with corner letters KL and LL, is offered on piece with a partial printed inscription, “ … wards the RIGHT HAND SIDE of the Lette … ” in the margin. The stamps are tied to the piece by two “192” numeral cancellations.

The entire auction catalog can be downloaded online at www.spink.com by clicking on the general link for Auctions and then scrolling to the “Robert Wallace” collection.

The sale is part of a series that also includes the James F. Hudson collection of British Africa, Part I, on Jan. 26; the Federico Borromeo collection of Nevis stamps and postal history on Jan. 27; East Africa from the Vestey collection, sold by order of the trustees, on Jan. 28; the philatelic collector’s series sales on Jan. 29 and 30; and the “Assab” collection of Italian Colonies on Jan. 31.