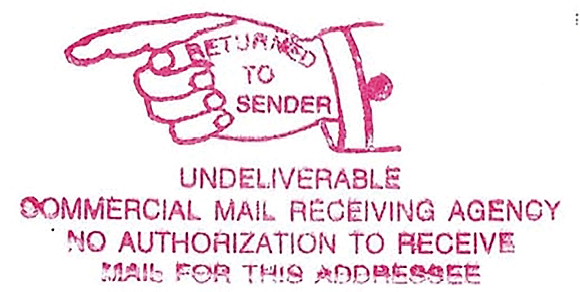 The rubberstamped marking, shown here at full size for legibility, explains why the cover was returned to the sender.

This Nov. 1, 2013, cover was undeliverable and returned to sender because of a United States Postal Service rule that dates back at least to 1993.

I am developing an exhibit that presents the history of the treatment of unmailable and undeliverable United States domestic first-class mail.

This exhibit begins with the introduction of return addresses (also known as corner cards) in 1860, because only with their introduction did it become possible for unmailable and undeliverable mail to be readily returned to the sender, rather than sent to the dead letter offices.

Direct return of such mail to the address in the corner card was a much less cumbersome and costly process than the return of matter via the dead letter offices, and eventually, branch post offices.

Although the practice of returns from DLOs (known as mail recovery centers since July 30, 1994) continues because some mail still carries no corner card, the vast majority of returns occur directly.

I am always searching out unusual examples of the direct return process, and the cover shown here illustrates such a use, though one that required some detective work on my part in order to understand it.

This domestic U.S. letter postmarked Nov. 1, 2013, was mailed to an address in Santa Fe, N.M., that was crossed out with a marker, and the word “Homewise” was written below the address. A rubberstamped marking stating “UNDELIVERABLE/COMMERCIAL MAIL RECEIVING AGENCY/NO AUTHORIZATION TO RECEIVE/MAIL FOR THIS ADDRESSEE” was applied to the cover, with the finger in the marking pointing to the sender’s corner card. The marking is illustrated here in actual size.

Homewise is the name of a nonprofit housing organization in Santa Fe, for which this envelope likely was intended.

I could not get a good explanation for this cover from my local U.S. Postal Service staff, but dealer and postal history expert Jim Forte was able to tell me that, from his experience, the USPS will not forward mail addressed to a commercial shipping and mailbox service, such as those at Mail Boxes Etc. The marked-out address on the cover is for a franchise location of the Pak Mail shipping and mailbox business.

Forte’s experience-based theory is actually a fact, corroborated by Section D042.2.7 of the July 7, 1997, Domestic Mail Manual in my home library. Further evaluation found this statement began only with the new format of the DMM, starting with DMM 46 of July 1, 1993. It also can be found in the latest DMM of Jan. 26, 2014.

The pertinent DMM section is found under “Forwarding/Forwardable Mail,” and states as follows: “2.2.7 Mail Addressed to CMRA Customers – Mail addressed to an addressee at a commercial mail receiving agency (CMRA) is not forwarded through the USPS. The CMRA customer may make special arrangements for the CMRA operator to remail the mail with payment of new postage. A CMRA must accept and remail mail to former customers for at least 6 months after termination of the agency relationship. After the six-month period, the CMRA may refuse mail addressed to a former customer.”

This discussion of CMRA undeliverable mail is not found in the first DMM of July 1, 1979, or in the manuals before number 46. However, Forte indicates that, again from his experience, even though rules concerning forwarding from CMRAs are not found in earlier manuals, such forwarding did not occur for at least some period before 1992.

It was interesting and frustrating to me that the postmaster at my local post office was unable to tell me about this postal rule, although he did mention that post offices are no longer supposed to use pointing hands or to obliterate addresses on undeliverable mail.

The cover and its marking discussed here are indications that there is important modern postal history yet to be discovered and understood, even up to the present day.

Tony Wawrukiewicz and Henry Beecher are the co-authors of two useful books on U.S. domestic and international postage rates since 1872.
The third edition of the domestic book is now available from the American Philatelic Society, while the international book may be ordered from the web site www.
spiritone.com/~tonywaw.