Mother and child identified on 1993 stamp 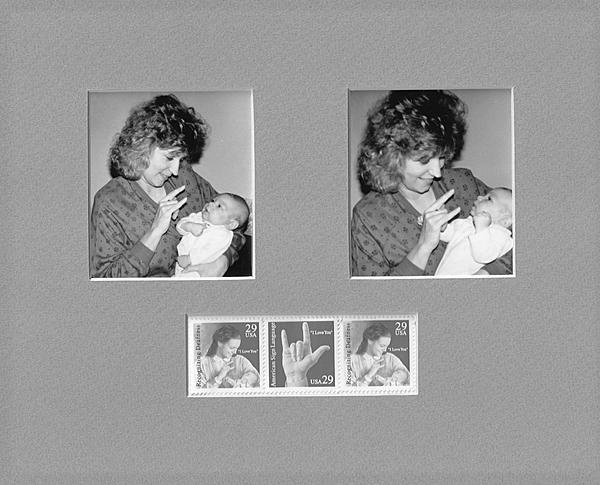 The inspiration for the design of the “Recognizing Deafness” stamp in the American Sign Language pair came from this photograph by Jerry Mabashov of his wife, Mary Lou Novitsky and their son Michael. 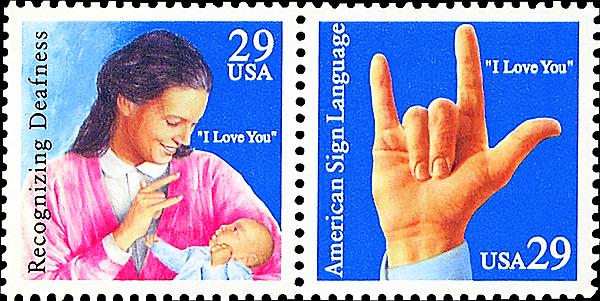 The stamp on the left of this 1993 American Sign Language pair uses an image derived from a photograph of a mother signing “I love you” to her baby.

Thanks to Linn’s reader Kenneth Rothschild, who specializes in deafness as portrayed on stamps, we have a new addition to the list of living people pictured on United States stamps.

The issue is the 1993 29¢ American Sign Language se-tenant pair (Scott 2783-2784). Actually the information about who is pictured on one of the stamps was mentioned in the 1993 Linn’s U.S. Stamp Yearbook by George Amick, but I had previously missed it.

In the yearbook, Amick wrote: “The design that [the Citizens’ Stamp Advisory Committee] and [the National Institute on Deafness and Other Communication Disorders] representatives like best, was the one that showed the mother signing ‘I love you’ to the infant in her arm. In creating this square-format design, [Christopher] Calle worked from a photograph by Jerry Mabashov that showed Mabashov’s wife, Mary Lou Novitsky, the deaf producer of the television program Deaf Mosaic, and their new baby, Michael Alexander Mabashov, who is also deaf. Calle changed the woman’s face and hair extensively in his painting to avoid the issue of depicting a living person on a stamp.”

(I have corrected the spelling of the photographer’s name, which was incorrectly spelled “Masbashav” in the yearbook.)

Rothschild provided additional information about the mother and child pictured on the stamp that is inscribed “Recognizing Deafness” and also had in his files one of the original photographs from which Chris Calle worked. This is shown nearby.

What has become of the baby in the photograph? Michael Mabashov is now a senior at Gallaudet University.

Rothschild is probably the world’s leading expert on deaf philately, and has published widely on the subject, given presentations all over the country promoting stamp collecting to groups concerned with deafness, and is working on a campaign to convince the U.S. Postal Service to issue a stamp in 2017 for the 200th anniversary of deaf education.

He was kind enough to provide a list of U.S. stamps that relate to the topic.

Among the people on the list are Helen Keller, Ruth Benedict and Henry M. Whitney, who were deaf.

Anthropologist Ruth Benedict is pictured on a stamp in the Great Americans definitive series. This 46¢ stamp was issued Oct. 20, 1995 (Scott 2938).

Journalist Henry M. Whitney was serving as postmaster of Hawaii when the kingdom issued its first stamps, nicknamed the Hawaiian Missionaries, in 1851 (Scott 1-4). The U.S. Postal Service issued a pane of four stamps in 2002 with stamp-on-stamp designs of the Hawaiian Missionary stamps (3694).

A painting by Spanish artist Francisco de Goya is reproduced on a 10¢ stamp (Scott 1537), part of the 1974 Universal Postal Union issue.

Scientist and inventor Alexander Graham Bell, who is remembered on a 1939 10¢ American Inventors stamp (Scott 893), was a teacher of the deaf and had a deaf wife and a deaf mother.

The 1993 AIDS Awareness stamp and the 1996 Breast Cancer Awareness stamps also qualify for this list because of information included in the selvage of their panes.

Thanks to Rothschild for his assistance with this column.

I would be happy to hear from readers who might know of other connections in U.S. stamps to deafness. Write to me via postal mail at John Hotchner, Box 1125, Falls Church, VA 22041; or by e-mail at jmhstamp@verizon.net.