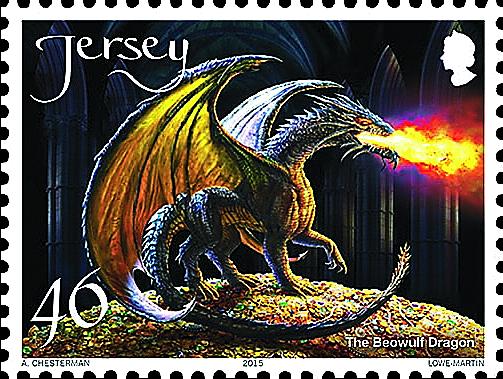 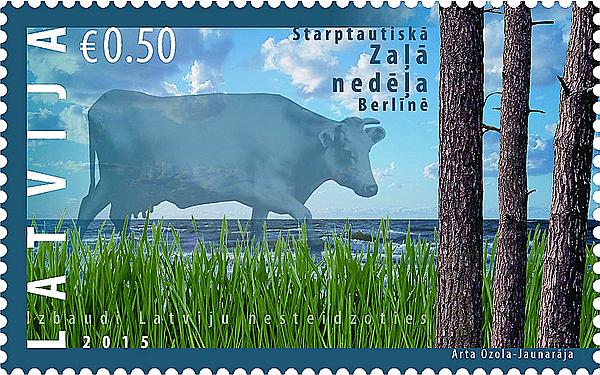 A Latvian stamp honoring a food, agriculture and horticulture exhibition in Berlin depicts a blue cow. 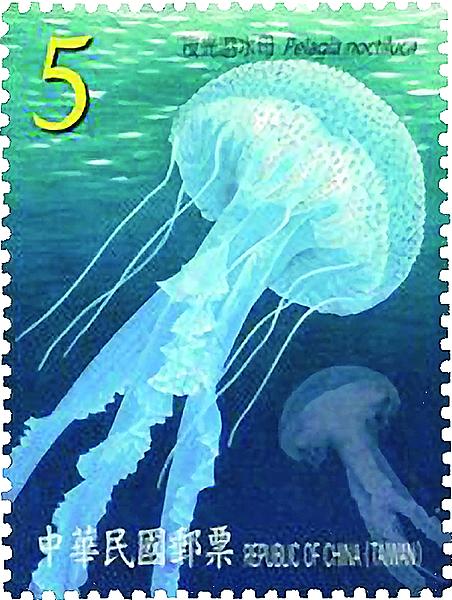 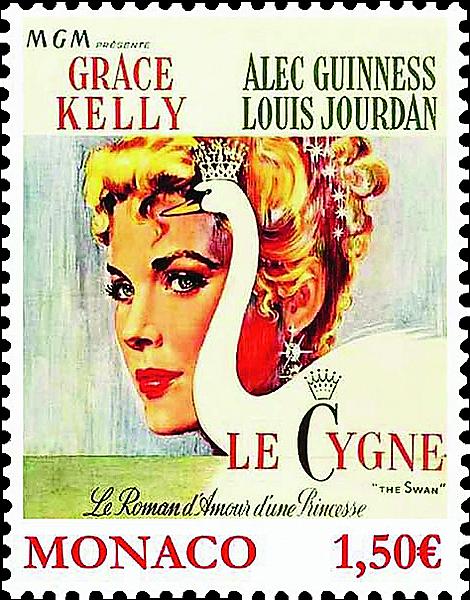 The poster for Grace Kelly’s film The Swan is reproduced on this stamp issued by Monaco Jan. 14. 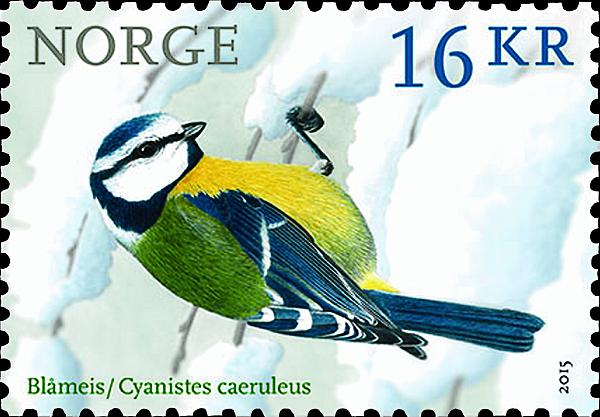 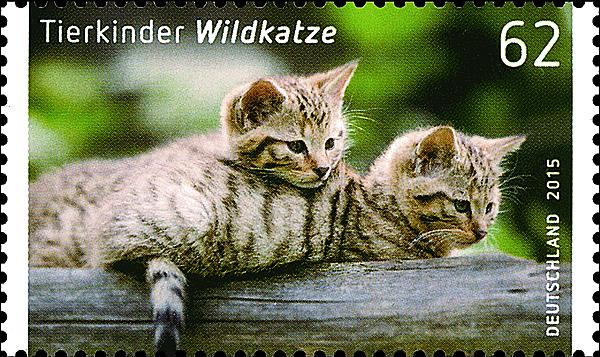 While goats and sheep are popular on recent new issues celebrating the year of the ram (Linn’s, Jan. 26, page 28), many other animals are pictured on stamps issued in January.

The postal administrations of Germany, Norway, Denmark, and the French Southern and Antarctic Territories started the year with animal stamps on Jan. 2.

The stamps issued by Germany are part of a continuing definitive series that Deutsche Post calls Tierkinder, which translates to “young animals.”

Similar in size and appearance to domestic cats, this species can be found in forests in Africa, Asia and Europe. There are an estimated 3,000 wild cats in Germany.

Birds are depicted on three stamps of Norway. The Eurasian eagle owl (Bubo bubo) is shown on a 31-krone stamp in the Wildlife in Norway series. With a wing span of about 6 feet, it is one of the world’s largest owls.

In announcing the new stamp, Norway Post said that this huge bird of prey is “known as a symbol of wisdom and erudition,” adding, “Everyone from major publishing houses to Harry Potter has made use of different types of owl to strengthen their profile with knowledge and wisdom.”

A souvenir sheet with three engraved stamps honors one of Denmark’s three national parks, the Wadden Sea National Park, which opened in 2010. The stamps, each with a denomination of 10 kroner, show a Texel sheep, black-tailed godwit and harbor seal.

The French Southern and Antarctic Territories, which issues most of its stamps for the year at the beginning of January, pictures a variety of creatures on its 2015 stamps, including penguins (Aptenodytes forsteri), birds (Sterna vittata), fish (Channichthyidae), insects (Anomalopteryx maritima and Ectemnorhinus vanhoeffenianus) and krill (Euphausia superba).

Animals are pictured on circus and movie posters reproduced on new stamps from Monaco.

The €0.95 stamp issued Jan. 7 for the Monte-Carlo International Circus Festival includes an elephant and a tiger.

A swan wearing a crown is pictured in a poster for Grace Kelly’s 1956 film The Swan. This €1.50 stamp was issued Jan. 14 in the second set of stamps featuring posters of Kelly’s films.

In announcing this stamp, Monaco’s Office des Timbres (stamps) said: “In the American film The Swan, directed by Charles Vidor, Grace Kelly’s natural elegance is a wonder to behold as she portrays a princess torn between a marriage of convenience to a prince (played by Alec Guinness) and her passion for a handsome commoner (Louis Jourdan).

“It is impossible not to wonder whether this role might have been something of a premonition for the future princess of Monaco. MGM, the company which produced the film, arranged for it to be released on the same day as Kelly’s civil marriage to Prince Rainier of Monaco, 18th April 1956.”

The stamps were released Jan. 8 in sheets of 20.

On Jan. 12, Kazakhstan honored its Naurzum Nature Reserve on a souvenir sheet of three stamps. Among the animals pictured are an Eurasian elk and a white-tailed eagle (Haliaeetus albicilla), who has just captured a fish.

Sometimes described as blue-gray in color, this cow originated in the coastal Kurzeme region.

According to a Latvian tourism website, http://travelinlatvia.com, the blue cow can withstand cold, wind and rain and produce more milk than other cows of the same size.

A wombat also is pictured on a stamp issued Jan. 23 by Japan. Among the other animals from around the world found on this set of 20 stamps is a St. Bernard and a California sea lion.

Budapest hosted the 34th Pigeon Olympiad Jan. 15-18, and Hungary issued four stamps on the opening day to commemorate the event.

Romania’s first stamp set of the year, issued Jan. 16, is called Champions of Wildlife. Three of the four stamps show animals leaping, and the fourth stamp features a runner.

The runner is a cheetah (Acinonyx jubatus). The world’s fastest land mammal, it can reach speeds up to 75 mph.

One of the leapers is a springbok (Antidorcas marsupialis), which can jump up to 13 feet in the air and run up to 62 mph.

The puma (Puma concolor), shown on another stamp, can jump even higher, up to 20 feet.

The remaining stamp shows an orca, or killer whale (Orcinus orca), the largest member of the dolphin family.
Lithuania and St. Pierre and Miquelon both issued animal stamps Jan. 17.

The €0.71 and €0.87 Lithuanian stamps show two mammals that are endangered in that country, the European mink (Mustela lutreola) and the otter (Lutra lutra).

The €0.38 stamp from St. Pierre and Miquelon features a photograph of a brightly colored male American redstart (Setophaga ruticilla) perched on a branch.

On Jan. 19, Greenland issued the second half of a two-set series focusing on the cultural importance of hunting within Greenland. A variety of marine and land animals can be seen on these 11-krone and 19kr stamps.

Although the two stamps are not se-tenant, they are designed so that they can “be positioned together so that the animals and the colours fit together to make a cohesive pattern,” according to Post Greenland.

In addition, an eagle and whale’s tail also can be seen on one of the two Greenland Songs stamps issued Jan. 19.

A variety of fictional animals also are illustrated on stamps issued in January.

A set of six stamps and a souvenir sheet from Jersey show interpretations of dragon legends from around the world.

Rachel MacKenzie, Jersey Post’s philatelic marketing executive said, “For our Dragons issue, we have explored a collection of different dragon myths, from the easily recognisable Saint George and the Dragon to the lesser known Philippine Bakunawa dragon which is said to cause eclipses by swallowing the moon … ”

The stamps were issued Jan. 6 to coincide with the opening of the The Hobbit: The Battle of the Five Armies on the island.

A fire-breathing dragon similar to Smaug from J.R.R. Tolkien’s The Hobbit is pictured on the 46-penny stamp.

A cat and three horses are pictured on a set of Fairy Tales stamps issued by Kazakhstan Jan. 15. Four children in orphanages created the designs.

Finland issued a booklet of six of stamps called Friends Together Jan. 19 for use on valentines. The stamp designs represent “joyful encounters in the forest,” according to Finland’s post office, Posti.

A mouse who has just finished making a mouse-shaped snow angel, a fox pulling a rabbit on a sled and a nest of singing birds are pictured.

A panda symbolizes “cool,” and a lion “robust” on two of the 10 Emoticons stamps issued by Belgium Jan. 26.

The online Merriam-Webster dictionary defines an emoticon as “a group of keyboard characters that are used to represent a facial expression (such as a smile or frown).” They also are called smileys.