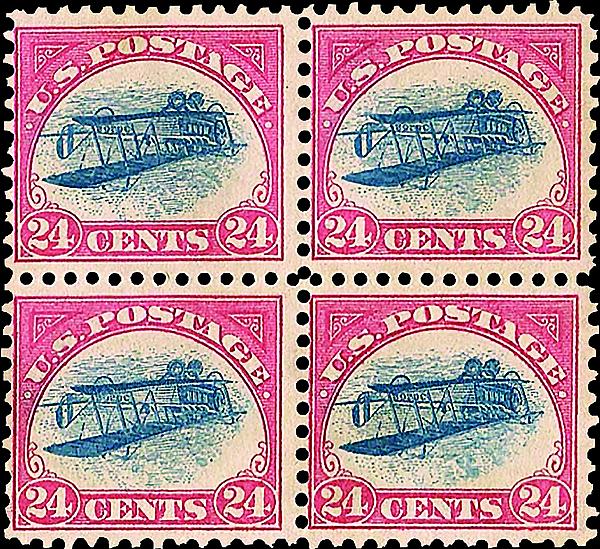 A handsome forgery of the 1918 24¢ Jenny Invert in a block of four was auctioned by Regency-Superior for $480. 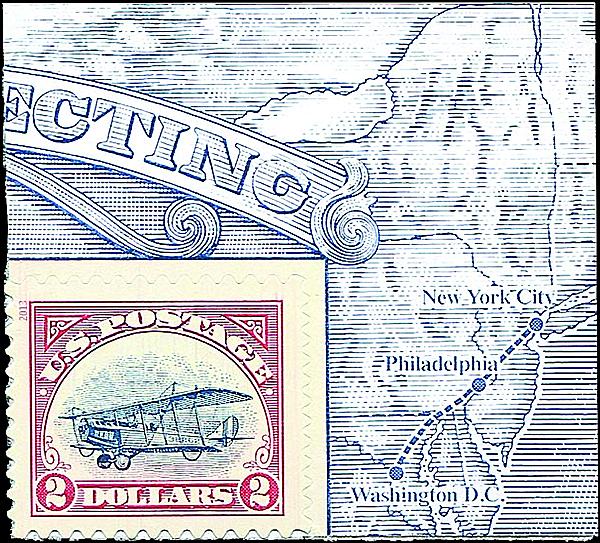 A single stamp from the intentionally created upright variety of the $2 Jenny Invert pane of six sold for $11,700 at Chicagopex. 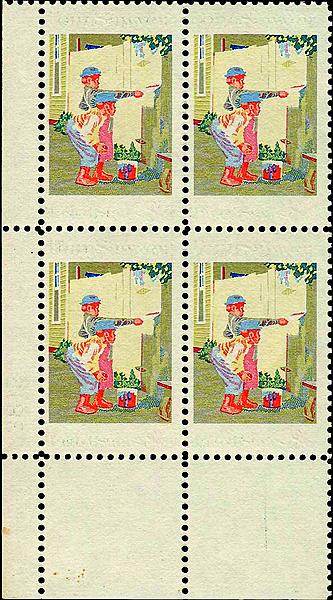 An error plate block of four of the 1972 8¢ Tom Sawyer stamp offered at the Regency-Superior auction was hammered down for $3,900. 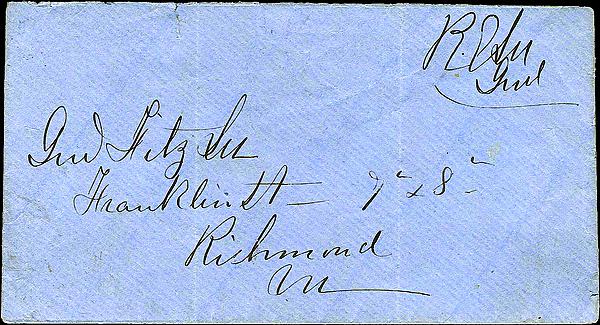 This Civil War-era cover franked with the signature of Confederate Gen. Robert E. Lee sold for $6,300 during the Nov. 22-23 Chicagopex auction conducted by Regency-Superior. The cover is addressed to Gen. Fitz Lee in Richmond, Va.

Regency-Superior held a sale of United States, Confederate and worldwide stamps and covers at the Chicagopex stamp show, which took place northwest of the city Nov. 21-23.

One of the country’s largest annual shows, run by the Chicago Philatelic Society, Chicagopex draws some 80 dealers and is accompanied by society meetings and exhibits of philatelic literature as well as stamps and postal history.

The Regency-Superior sale took place the latter two days of the show, and was previewed in Linn’s issue of Nov. 17.

One of the more notable items was an undated field letter endorsed by Gen. Robert E. Lee, the commander of the Confederate armies during the Civil War. The blue envelope, slightly torn and missing a back flap, was addressed in Lee’s own hand to Gen. Fitz Lee in Richmond, Va.

Fitzhugh Lee was a nephew of Robert E. Lee, and when Virginia seceded, he quit his position as cavalry instructor at West Point to join the Confederate States Army. He rose to brigadier general in 1862 and major general in 1863, evidently as a result of his own abilities rather than due to his uncle’s influence. Shortly before the surrender at Appomattox, Gen. Fitz Lee was given control of the entire cavalry.

After the war, Fitz Lee returned to farming and was influential in the reconciliation with the North, serving as governor of Virginia and U.S. ambassador in Havana. When the Spanish-American war broke out, he rejoined the U.S. Army, serving until 1901. Later, he helped plan the Jamestown Exposition of 1907.

The cover in the Regency-Superior sale is an example of a field frank. While military officers did not enjoy free postal privileges, they were entitled to have their letters delivered free to the nearest post office, or to other active officers.

As the auction catalog noted, “Robert E. Lee signatures are in great demand.” This one sold for $6,300, including the 20 percent buyer’s premium Regency-Superior adds to all lots.

From the sale’s extensive run of errors, freaks and oddities (EFOs), a couple of items stood out.

One of the most visually dramatic was a block of four of the 1972 8¢ Tom Sawyer stamp, with black and red intaglio inks missing (Scott 1470b), in a lower left margin plate block — or what would normally be a plate block, were the plate numbers actually visible.

All that remains of the missing color is a subtle “blind” embossing of the lettering and a “light tagging setoff” on the oddly ghostly illustration of Tom watching his friend famously whitewashing the fence for him.

Cataloged as four singles, with no premium for the phantom plate block, the item fetched $3,900.

Among very modern issues, another single was offered from the intentionally created upright Jenny variety of the 2013 $2 Jenny Invert pane of six (Scott 4806).

Attached to the top-right corner selvage showing the original pioneer airmail route from Washington, D.C., to Philadelphia and New York, the stamp was accompanied by a Philatelic Foundation certificate grading it XF-Superb 95.

The following lot, a block of four forgeries of the original 1918 24¢ Jenny Invert (Scott C3a) made in the 1980s by Peter Winter, sold for $480. It was described as “arguably the best of the numerous forgeries” made by Winter, with color close to the real thing and correctly perforated 11, but on a thinner, stiffer paper.

Winter, a former German opera singer who marketed his creations under the names ProPhil Forum and House of Stamps, never tried to pass them off as real, but since they lack any marking identifying them as fakes, some consider them good enough to fool a novice collector or investor. Winter at one time reportedly offered to stop making his fakes if the American Philatelic Society would pay him a large sum, but the organization declined.