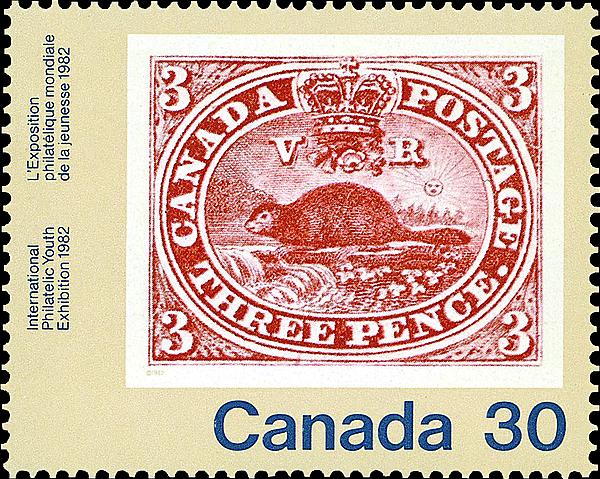 The most detailed image of Canada’s 3-penny Beaver is this enlargement on a 30¢ stamp-on-stamp from 1982. 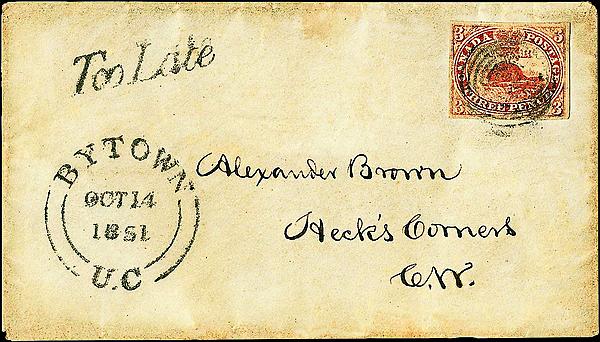 Canada’s imperforate 1851 3-penny Beaver (upper left) and its direct descendants, including the perfor 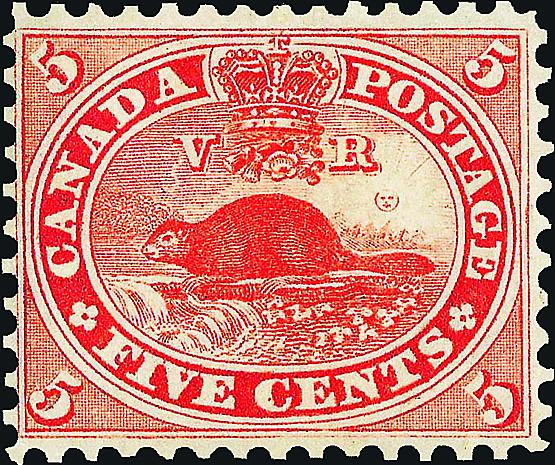 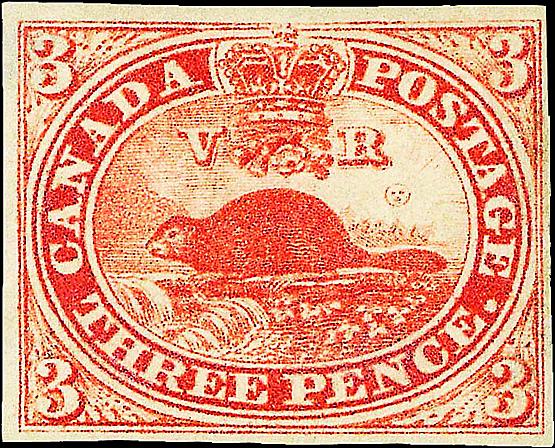 The Canadian Museum of History’s “Chronology of Canadian Postal History” picks up the tale: “Only two days after being instructed to reorganize the Post Office from top to bottom, James Morris met with Sandford Fleming in Toronto, on 24 February 1851, to discuss details concerning postage stamp illustration.

“During the meeting, Fleming suggested the idea of using the beaver to illustrate the first Canadian postage stamp.

“… Fleming felt that the beaver was totally appropriate, since this characteristic specimen of Canadian wildlife, known for its industriousness, its building skills and its tenacity, was the perfect representative of a young nation occupied with building its future in a land that was still virtually undeveloped.

“The beaver was also evocative of the colony’s beginnings, since beaver pelts were one of the first articles of trade between Amerindians and the French who disembarked in New France.”

Some 250,000 of the first of Canada’s Beaver stamps were printed in New York by Rawdon, Wright, Hatch & Edson in red or orange red on horizontally laid paper.

Issued April 23, these imperforate stamps paid for ½-ounce letters sent within what would become Ontario and Quebec and to the Eastern maritime colonies.

A year later, in 1852, a second imperf 3d Beaver (Scott 4) followed, of which 2,850,000 were ordered. Red is the most common color, but catalogs list four other shades and five different papers.

A 3d red Beaver officially perforated 11¾ was issued in January 1859 (Scott 12), of which only 450,000 were ordered in anticipation of new Canadian decimal currency.

In July 1859 came its replacement, a perforated 5¢ vermilion Beaver (Scott 15), also seen in brick red and orange red. Many plate flaws and re-entries are known, the best of them commanding significant premiums.

This resilient rodent survived to witness the arrival of the Dominion of Canada on July 1, 1867.

Even in the 21st century, a respectable used example is well within reach of a student’s stamp budget.

After 17 years of service, the Beaver quietly retired. It did not resurface until 1951, gracing the 15¢ high denomination (Scott 314) in a set of four celebrating Canada’s stamp centennial at the nation’s first international philatelic exhibition.

A 30¢ stamp attractively enlarging the 1851 original was one of five stamp-on-stamp designs issued as singles and in a souvenir sheet in 1982 (Scott 909).

In 2001, the Beaver design made its most recent encore on a 47¢ commemorative saluting the 150th anniversary of postal independence from Britain (Scott 1900).

The 1982 30¢ stamp enlarged nearby probably gives us the best look at Fleming’s 163-year-old design. Under the crown and the cypher of Queen Victoria, and the Tudor rose, Scottish thistle and Irish shamrock, the plump Canadian beaver reposes on a shallow ledge at river’s edge above a bed of white trilliums, a look of contentment on his squirrel-shaped head. Beyond is the forest primeval, overseen by a benevolent sun with a similar placid expression.

All in all, I find these more satisfying portraits than those of many monarchs seen on 19th-century stamps.