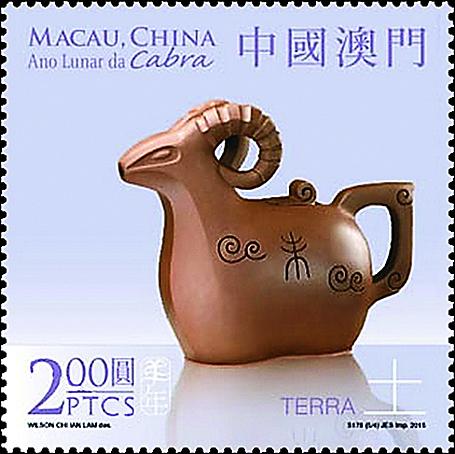 This stamp from Macau represents the earth goat. Other stamps in the same set show a wood goat (for 2015), and metal, water and fire goats. 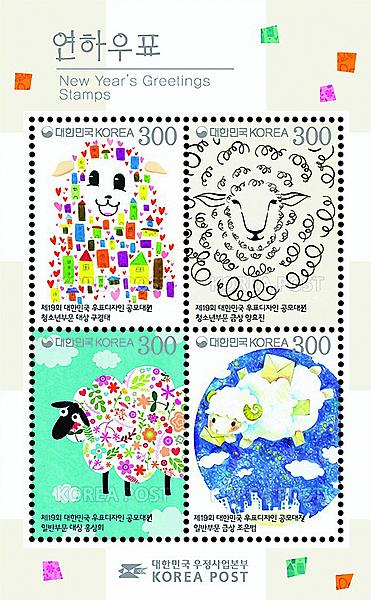 Winning designs from a stamp competition are reproduced on the South Korea souvenir sheet celebrating the year of the ram. 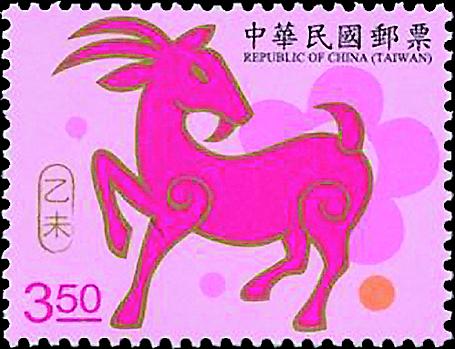 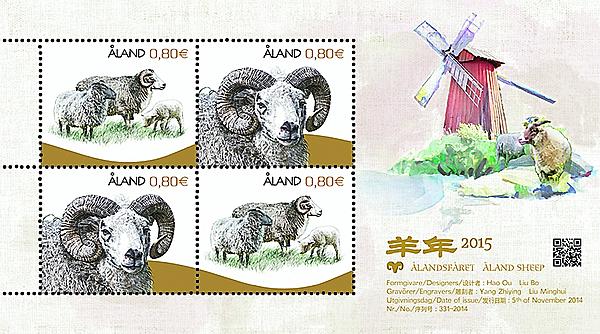 This sheep-themed souvenir sheet from Aland was designed, engraved and printed in China. It was issued Nov. 5, 2014.

Many recent and upcoming stamps feature sheep or goats in conjunction with the year of the ram, which will begin Feb. 19.

For example, sheep of Aland are illustrated on two stamps issued Nov. 5, 2014, in a souvenir sheet of four. Each stamp is denominated €0.80.

An archipelago at the entrance of the Gulf of Bothnia in the Baltic Sea, Aland is a self-governing region of Finland.

Some of the sheep of Aland, both rams and ewes, have horns, while others do not.

These compact, hardy sheep are believed to have originated from an ancient breed introduced to Aland in the 17th century from the Swedish island of Gotland, according to NorthSheD, a research project devoted to sheep of Nordic countries.

The stamps are in a block of four on the left side of the sheet. A windmill and more sheep are pictured in the selvage on the right side.

The sheet was designed, engraved and printed in China. The engravers, Liu Minghui and Yang Zhiying, were studying under Norwegian stamp engraver Martin Morck as part of a training program organized by the Danish post office and the China Post Printing Bureau.

A competition was held among Morck’s students to select the stamp designs, with Hao Oui and Liu Bo creating the winning artwork.

Newspapers in the Philippines reported on these new stamps, though none mentioned what scent was used.

The designs by Jose Antonio Jayme show the head of a goat on the 10-piso denomination, and a symbolic goat on the 30p stamp.

In addition to the separate sheets of 10, the two stamps were printed se-tenant in a souvenir sheet of four.

The two stamps were printed separately in sheets of 20. A souvenir sheet contains a single NT$12 stamp showing the two symbolic animals in different positions.

Each stamp bears a denomination of 300 won. The stamps were printed separately in sheets of 20 and together in a souvenir sheet of four.

The stamp at upper left in the souvenir sheet shows the grand-prize winner in the youth category. This design by Tae Goo shows houses, buildings and hearts forming an outline design of a sheep.

Jin Yang’s outline image of a sheep, created using squiggly lines, won the gold in the youth category and is shown on the stamp in the upper right corner.

Vietnam’s 3,000-dong and 10,500d stamps each depict a different design of an adult and juvenile goat, or kid, with floral decorations on their torsos. They were printed in sheets of 20.

The Isle of Man Post Office worked together with the Isle of Man Chinese Association to create a souvenir sheet inscribed “Year of the Sheep.” The sheet was issued Jan. 2.

According to a press release from the post office, the sheet recognizes the Isle of Man’s commercial and diplomatic relationship with China.

The press release also said: “The year 2015 is going to be an exciting time. The sheep is the eighth sign in the Chinese astrological calendar, and ‘eight’ is traditionally believed to be a lucky number. The number is also considered to attribute peace and prosperity … ”

Included in the selvage are images of a third sheep and red Chinese lanterns, along with calligraphy

The 10p denomination also was produced in sheets of 16 stamps with labels in the four corners.

On Jan. 5, China and Macau issued stamps for the new year.

The 1.20-yuan stamp from China shows a colorful ram with magenta hooves and a variety of floral and other decorative designs on its horns and body.

The stamp was printed in sheets of 20 and sheets of six.

According to a website for Guangzhou (www.lifeofguangzhou.com), where the stamp was issued, the sheet was specially produced for the city, and the image in the selvage of a ram with ears of rice in its mouth represents the legend of “five immortals riding rams to deliver rice ears in Guangzhou.”

The stamps from Macau represent the five elements associated with the Chinese horoscope: metal, water, fire and earth on four 2-pataca stamps, and wood (2015 is the year of the wood goat) on 5pa and 12pa stamps.

The 12pa stamp is in a souvenir sheet of one, and the other five stamps are se-tenant in a sheet of 20.

Also, the United States will issue a Year of the Ram stamp Feb. 7, and the United Nations issued a pane of stamps Jan. 23.