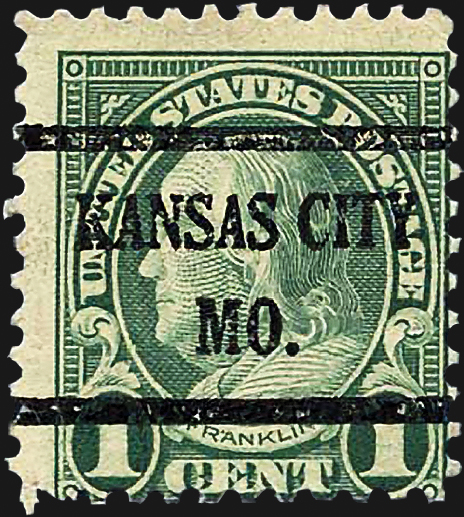 A newly discovered example of the United States 1923 perf 11 rotary press 1¢ green Franklin sheet-waste stamp with Kansas City precancel will be auctioned by Harmer-Schau at the American Philatelic Society’s Feb. 13-15 at the Ameristamp Expo in Riverside, Calif.

The sale will take place in rooms 7-8 at the Riverside Convention Center, 3637 Fifth St., Riverside, Calif., with previews at the convention center Feb. 12-15.

Foreign and British Commonwealth material will be offered Friday, followed by United States lots (including postal stationery, Confederacy and possessions) on Saturday, and U.S. and worldwide collections on Sunday.

The auction offers the property of 108 owners, including the George Main collection of worldwide aerograms, stock of S&C Stamps of Ohio, and the Tasmania postal history exhibit of David McNamee.

The discovery of the U.S. 1¢ sheet-waste rarity bumps the number of known examples from 13 to 14.

Kurt Schau of Harmer-Schau told Linn’s, “The Scott 596 was found by a dealer who routinely checks precancels for better items.”

The stamp carries the “Kansas City, Mo.” precancel found on eight of the other known examples. According to the auction catalog description, the stamp is “fine appearing” with a “tiny crease at upper right, two tiny margin tears and added perf tip at lower left.”

It is authenticated with a 2014 certificate from Philatelic Stamp Authentication and Grading (PSAG).

This stamp variety was unknown for more than a dozen years until its discovery in 1936 by Max Johl.

It was listed as Scott 596 in the 1963 Scott Specialized Catalogue of United States Stamps and Covers, but mistakenly described as “Made from coil waste of No. 604.”

That misconception remained for several years, even though the reference to No. 604, the endwise coil, was dropped in the 1970 catalog.

But the matter was cleared up in the 1996 Scott U.S. Specialized catalog with a revised listing and a feature article by researcher Gary Griffith that helped to clarify the origin of the stamp as created “probably to salvage waste ends from the rotary press run,” where “some small quantity of these 1¢ sheet stamps were given 11-gauge perforations.”

The stamp then and now is valued with the grade of fine in the Scott U.S. Specialized catalog, but the values themselves have increased significantly over two decades, from $27,500 for the stamp with Bureau precancel to its current $100,000 value.

The auction’s first session on Friday is particularly strong in German and Italian states, Great Britain and the Commonwealth.

The Harmer-Schau auction is available for viewing and bidding online at www.harmerschau.com.