Stamps Down Under: Original art makes covers from Down Under ‘keepers’ 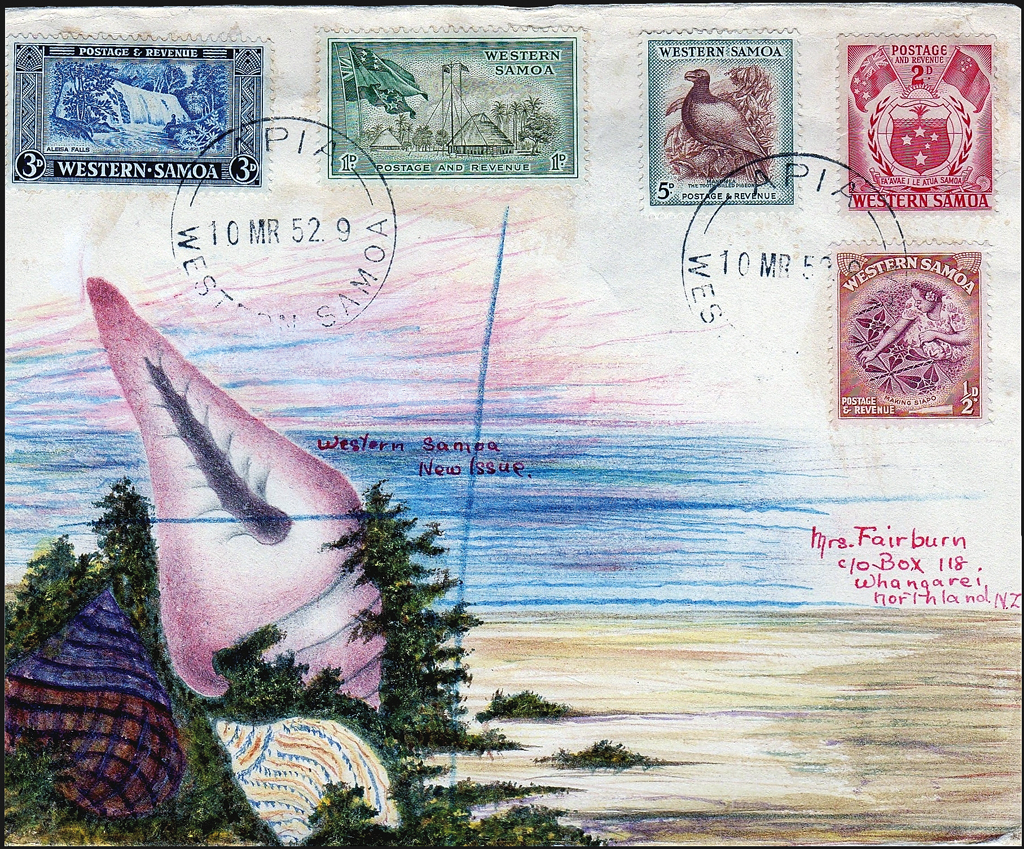 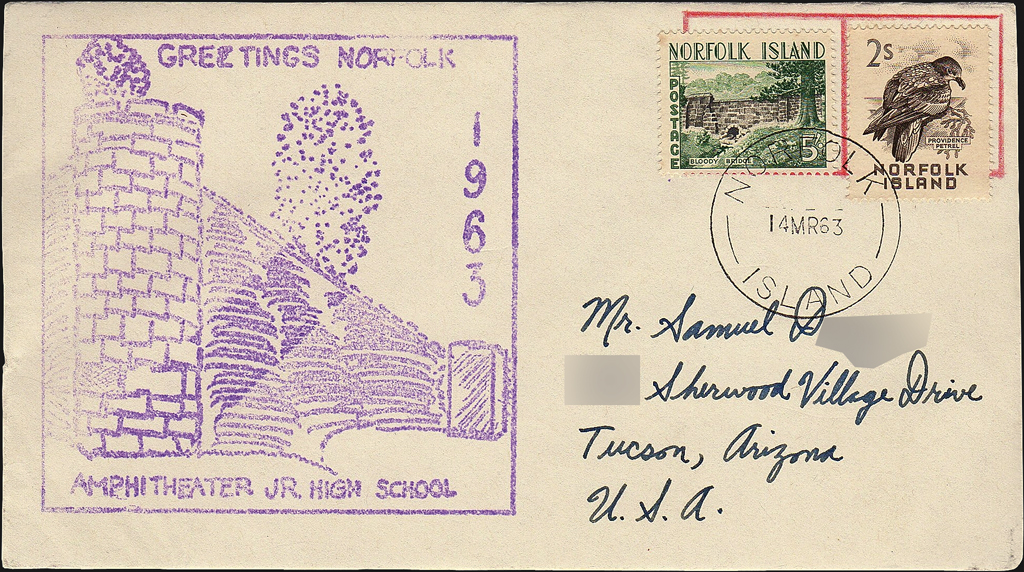 From Arizona to Norfolk Island and back again, this cover with a mimeographed cachet became a teaching tool in a Tucson junior high. 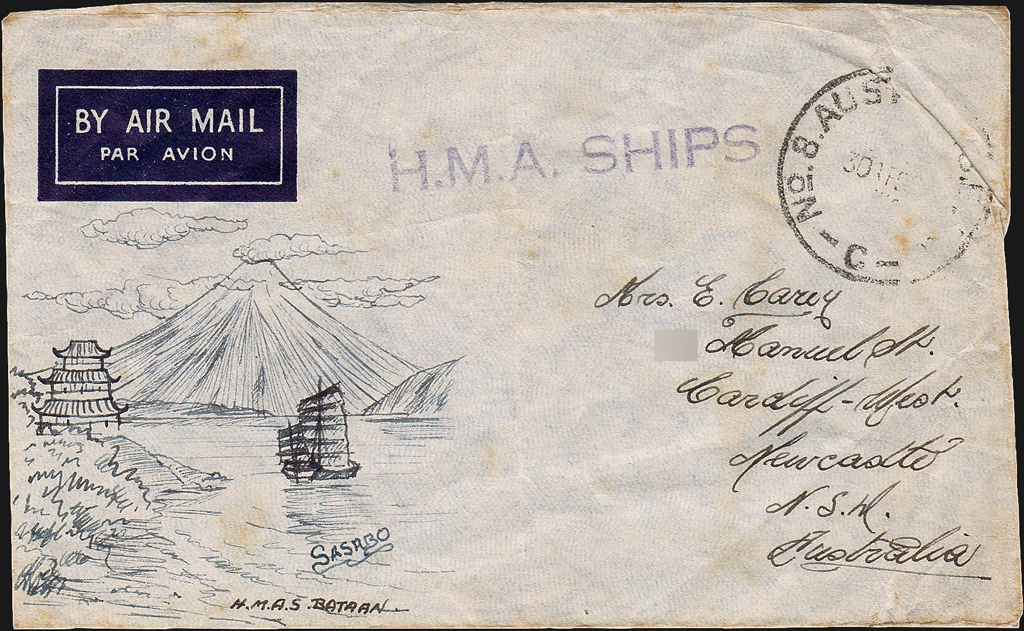 An Australian sailor aboard a destroyer in Japan in 1953 drew Sasebo Harbor with a volcano in the background on a cover to send home. 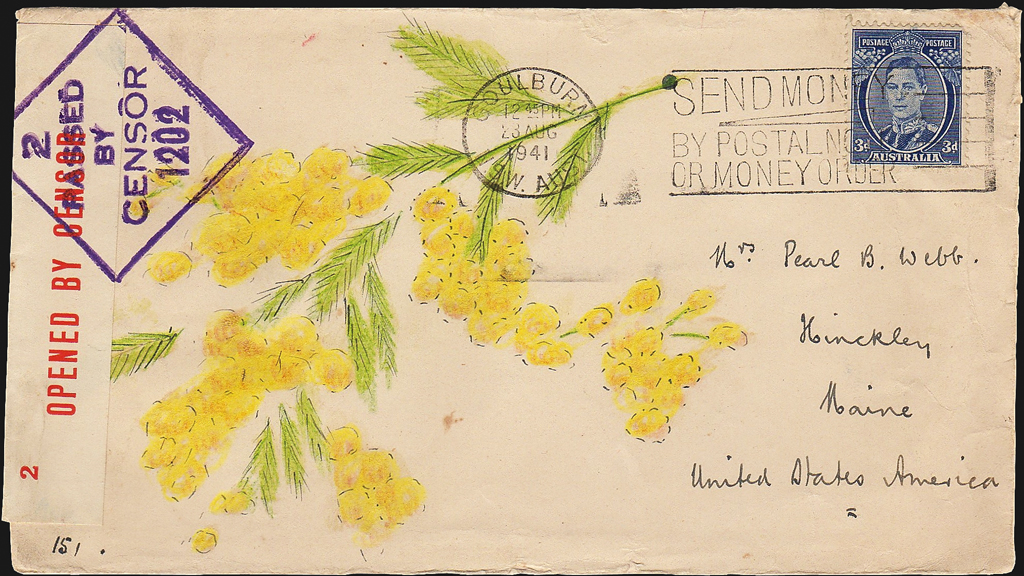 A lucky pen pal in Maine received this beautifully drawn and colored cover from Australia in 1941, after the censor passed it.

One of stamp collecting’s many offshoots is the creation of beautiful designs known as “cachets” (ka-shays) on envelopes.

Hand-drawn and hand-painted cachets become instantly collectible. The art done by a child on an envelope and sent to a grandparent becomes a family treasure.

Original art done on first-day covers or an envelope carrying a friendly letter are eagerly sought by collectors, with the work of some artists, such as Dorothy Knapp (1907-1986, especially active in the United States as a cachet artist in the 1940s), fetching rather large sums.

Using one’s creativity, a “keeper” can be mailed to a family member, friend or other loved ones, as is proved by the cover shown, sent from Goulburn in Southwest Australia in 1941. It went to a pen pal in Maine, and the sender made a drawing of Australia’s national flower, the golden wattle, in full bloom, using watercolor to bring the drawing to life.

In August 1941, Australia was at war with Germany, and mail going overseas was opened and examined by censors. This letter got thumbs up from the censor and safely made its way to the recipient bearing the censor’s handstamp and sealing tape.

It is still a pretty cover with those war wounds, and it obviously became a keeper that collectors have curated and passed along for the past 74 years.

Military personnel have been known to decorate their letters home, such as the cover illustrated, sent in April 1953 by a sailor serving with the Royal Australian Navy. He was aboard the destroyer HMAS Bataan, en route from Japan to Korea.

The pen-and-ink drawing of a scene in Nagasaki Prefecture shows a Japanese sailboat in Sasebo Harbor in the foreground and a volcano in the background, as interpreted by the unknown sailor-artist.

Imagine learning about exotic South Pacific islands because your teacher created decorated covers and sent them to those places to have stamps and postmarks affixed. When the covers returned from their trips, they could become the basis for a lesson plan embracing geography, sociology, history, anthropology and biology as the covers circulated among the students.

An imaginative and innovative teacher named Samuel Dougan, at Amphitheater Junior High School in Tucson, Ariz., did this in the 1950s and 1960s.

The cover shown here, returned from Norfolk Island, is postmarked March 14, 1963. In those days, teachers often produced exam papers and other handouts using the affordable high-tech equipment of the day: the mimeograph machine. This is what Dougan used to reproduce his drawing of one of Norfolk Island’s prisoner-constructed bridges onto an envelope, making an attractive and historic cachet.

The hands-on experience of holding an envelope that had been to Norfolk Island surely must have made a lasting impression on the students.
Amphitheater Junior High is now called Amphitheater Middle School. Multiple requests to the school for information about the teacher who brought cacheted covers into his classroom have gone unanswered, but the teacher had a fine idea, and his covers became keepers.

U.S. first-day cover collectors have no difficulty finding beautifully hand-painted covers, both current and older. The artistic efforts cover a spectrum from work done by children having a creative snow day to seriously accomplished professional artists such as Dorothy Knapp, whose covers are beautiful, highly sought and priced accordingly.

Less common and highly collectible are beautifully decorated covers made in other countries. A fine example is the hand-painted cover produced by “Mrs. M. (Myrtle) Purdon” of Whangarei, New Zealand. It is a first-day cover for five definitive stamps issued by Western Samoa March 10, 1952. The seashells, beach and ocean are carefully and colorfully executed.

The most extensive information found to date about Mrs. Purdon’s cachets was published by the New Zealand Society of Great Britain (NZSGB), in the group’s journal, The Kiwi, September 2013.

Myrtle Purdon was a self-taught artist, and most of her cacheted covers were sent to Mrs. Fairburn, her mother. According to research done by NZSGB member John Watts, Mrs. Fairburn was a stamp collector.

The NZSGB’s website has information about the Purdon cachets in the form of downloadable PDF files of color illustrations of her covers from 1947 to 1961.The website address is http://www.nzsgb.org.uk/purdon.html.

The next time you paw through a dealer’s cover boxes, look for some hand-decorated envelopes from Down Under. They are not common, but fun to search for and will add splash and dazzle to your collection.