The Onion takes a jab at the U.S. Postal Service and its customers 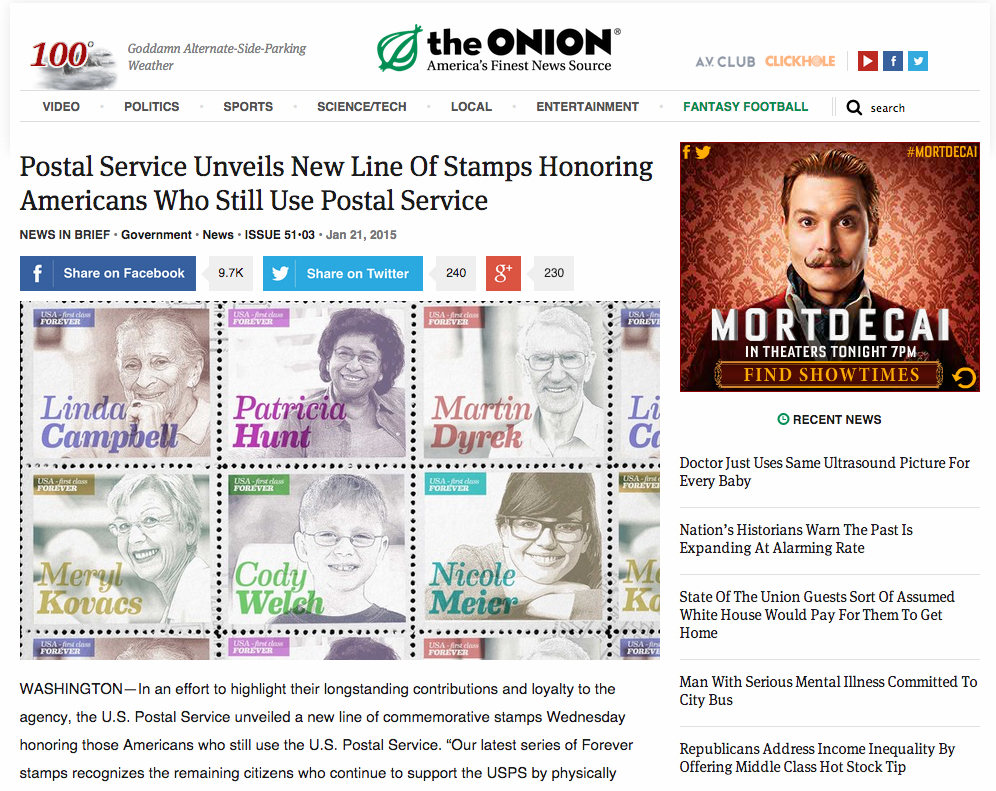 The United States Postal Service has made the pages of The Onion (or at least its website).

The satirical news publication took a light-hearted jab at the service with a Jan. 21 "News In Brief" report titled, “Postal Service Unveils New Line Of Stamps Honoring Americans Who Still Use Postal Service."

“Quoted” in the piece was Postmaster General Patrick R. Donahoe:

“Our latest series of Forever stamps recognizes the remaining citizens who continue to support the USPS by physically sending their bills, rent checks, and thank-you cards via traditional mail,” said [Donahoe], noting that the newly issued stamps will depict such longtime supporters as Linda Campbell, an elderly Charleston, SC resident who still writes letters to her loved ones regularly, and 24-year-old Nicole Meier, who sends postcards during various trips around the country using the national mailing system. “The efforts of these individuals—including Salem, OR resident Patricia Hunt, who mails a birthday card to her nephew each year, and the sixth-grade teacher at Nyack, NY’s Humphrey Elementary School, who still has students send letters to their state senators every fall—are worthy of our praise and deserve the highest honor the USPS can bestow.”

The Onion report also breaks the news that a limited-edition stamp “honoring those who have purchased a booklet of stamps, later lost it, and then had to buy another one” will be released in the not-so-distant future.

Always nice to have a good laugh, even if it’s at hobby’s expense.