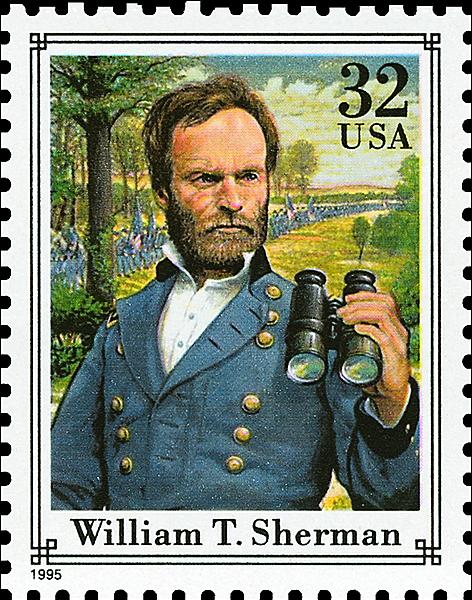 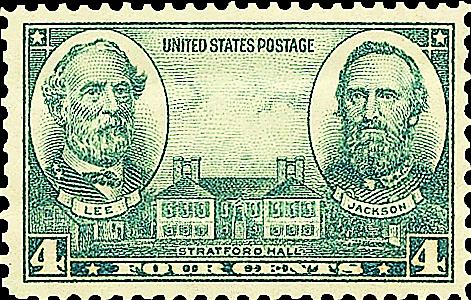 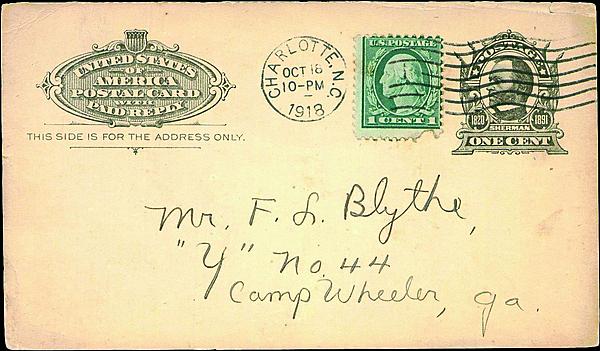 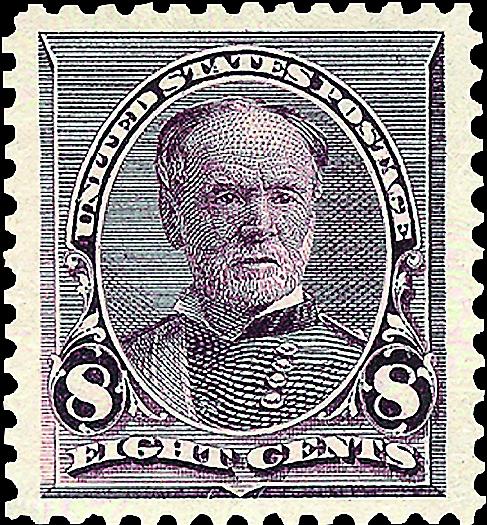 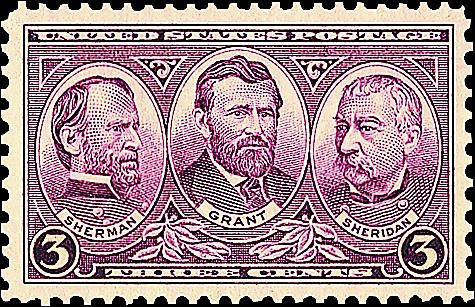 Long after the end of the Civil War, seven decades of peace between the North and the South was rattled by a 3¢ purple stamp (Scott 787).

It was part of the 1936-37 Army series and featured portraits of three Union generals. The general whose portrait caused the stir was William Tecumseh Sherman.

Admired in the north, Sherman was still hated by many Southerners for his destructive campaigns through Georgia and South Carolina in 1864-65.

After the Spanish-American War, Sherman stamps were overprinted for use in Guam (Scott 7), the Philippines (222) and Puerto Rico (213).

Sherman was also commemorated on the message portion of a 1904 1¢+1¢ paid reply postal card (Scott UY4) with Union General Philip Sheridan in the design of the attached reply cards. An uprated postally used reply card is shown with this article.

The Sherman definitive stamps of the 1890s paid the 8¢ registration fee rather than a more common postal rate.

Sherman dropped out of the lineup for the 1902-03 definitive series, with Martha Washington taking his place on the 8¢ stamp (Scott 306).

While the earlier Sherman stamps had slipped under the radar of irate Southerners, by the 1930s stamp collecting was very popular, and numerous American newspapers had regular philatelic columns. New issues were well publicized, and there was no place for the new Sherman stamp to hide.

Newspapers criticized the choice of Sherman’s portrait on the stamp, and the legislatures of Georgia and South Carolina passed resolutions against it.

In addition to Sherman, the stamp depicted Union generals Ulysses S. Grant and Philip Sheridan, the latter of whom was hardly more popular in the South than Sherman.

There were calls for boycotting the stamps if they were issued. Curiously, when the stamps went on sale, they sold well in South Carolina and Georgia. Post offices in Atlanta and Columbia ordered additional shipments.

Postmasters noticed that some buyers were philatelists, but many were noncollectors who wondered what the controversial stamp looked like. Others bought the stamps as a joke and reportedly stuck them upside-down on envelopes. After all, it was a way a Southerner could lick Sherman.

A smaller controversy broke out over Lee’s portrait on the stamp. Sharp-eyed military historians noticed the stamp design showed Lee with two stars on his collar, the insignia of a mere lieutenant colonel.

Eventually, the press moved on to other concerns, leaving behind a popular and attractive series of classic engraved stamps, with some lively stories to add extra interest to them.

When General Sherman next appeared on a U.S. stamp in 1995 as one of the 32¢ stamps (Scott 2975q) in the pane of 20 Civil War stamps, there were few unreconstructed rebels left to object.