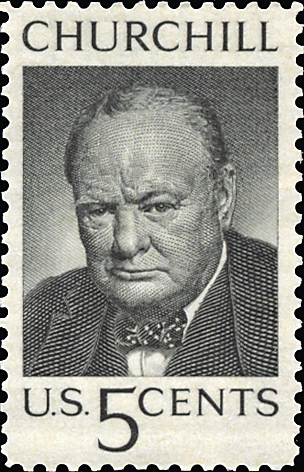 A 5¢ memorial stamp for Winston Churchill was issued by the U.S. Post Office Department shortly after the British statesman's death in 1965.

The 50th anniversary of the death of Winston Churchill on Jan. 24, 1965, is being commemorated by many throughout the world, particularly in the United Kingdom, where he served as prime minister during the turbulent years of the second World War.

His leadership during the war cemented his friendship with President Franklin Roosevelt and inspired admiration among the American people.

The stamp was designed by Richard Hurd using a 1941 photograph by Yousuf Karsh.