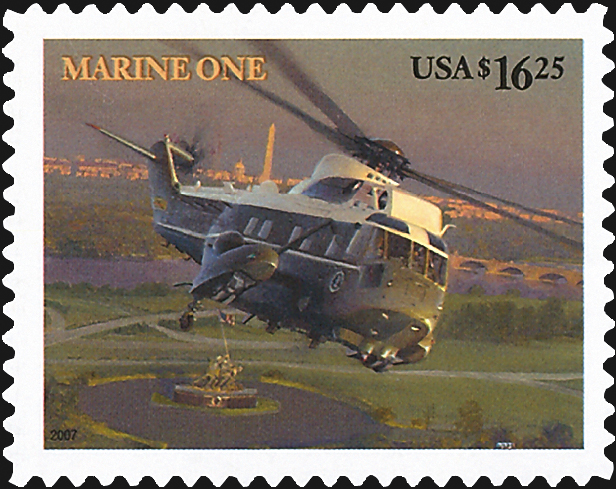 A $16.25 stamp from 2007 shows the military helicopter Marine One; artist William S. Phillips, who illustrated the new Coast Guard stamp, also created the painting for this earlier stamp. 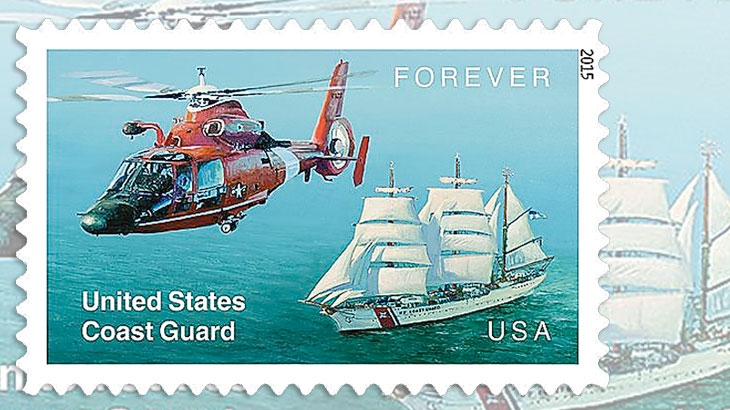 The United States Coast Guard is honored on a new commemorative stamp that will be issued Aug. 4, with a ceremony in Washington, D.C. 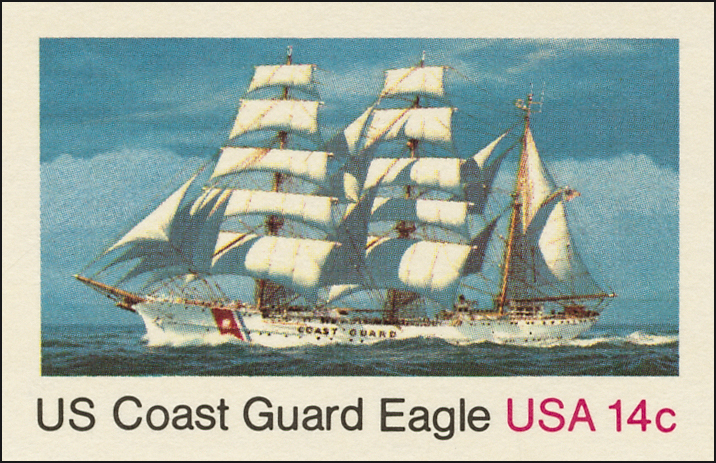 The U.S. Coast Guard barque Eagle, which is featured on the new Coast Guard commemorative stamp, was shown in 1978 on the imprinted stamp for a 14¢ postal card.
Previous
Next

A new United States nondenominated (49¢) forever stamp honoring the U.S. Coast Guard comes as the agency celebrates 100 years of service under that name.

However, the origins of the Coast Guard go back to a designated fleet of 10 boats authorized 225 years ago as the Revenue Marine by President George Washington.

The stamp will be issued Aug. 4 with a 10 a.m. ceremony at the Douglas A. Munro Headquarters Building, 2703 Martin Luther King Jr. Ave. SE, Washington, D.C.

The U.S. Postal Service notes that a reservation to attend should be placed before July 21 by e-mailing nationalevents@usps.gov, or telephoning 202-268-3418.

Security prescreening by the Department of Homeland Security will take place before visitors are admitted on the U.S. Coast Guard Base National Capital Region campus where the Munro Headquarters Building is located.

The stamp design is an oil-on-masonite painting by aviation artist William S. Phillips depicting two icons of the Coast Guard: an MH-65 Dolphin helicopter, which is the standard rescue aircraft of today’s Coast Guard, and the barque Eagle, a 295-foot three-masted sailing ship known as “America’s Tall Ship.” USPS art director Phil Jordan is the designer for this project.

The Eagle appeared previously on a 14¢ U.S. postal card issued Aug. 4, 1978 (Scott UX76), with an illustration painted by maritime artist Carl G. Evers. The postal card fulfilled the international surface rate in effect at the time.

The ship is the seventh U.S. cutter to carry the name Eagle. It was built in 1936 by the Blohm and Voss Shipyard in Hamburg, Germany. Originally named Horst Wessel, it was claimed as war reparations by the United States at the end of World War II and commissioned into Coast Guard service.

The ship’s hull is built of steel four-tenths of an inch thick, according to the Coast Guard, with two full length steel decks, a platform deck below and a raised forecastle and quarterdeck. The weatherdecks are three-inch-thick teak over steel.

The Eagle is used as a training vessel for future Coast Guard officers, and has represented the Coast Guard at tall-ship events and competitions.

Its home port is the U.S. Coast Guard Academy on the Thames River in New London, Conn.

The MH-65 Dolphin short-range recovery helicopter depicted on the stamp is an upgraded version of the HH-65 series utilized by the Coast Guard since 1984. It is described as the primary Coast Guard aircraft used aboard certified cutters during deployments.

Only a few helicopters have been shown on U.S. stamps previously. A $16.25 stamp depicting the military helicopter Marine One was issued June 13, 2007 (Scott 4145); the illustration for this Express Mail stamp was also painted by William S. Phillips.

The Coast Guard was first established as the Revenue Marine when President Washington signed into law an act that provided for a fleet of 10 revenue cutters to aid in the collection of duties on imports.

In 1915, President Woodrow Wilson signed into law the “Act to Create the Coast Guard,” which combined the existing Life-Saving Service and Revenue Cutter Service to establish the new service branch.

The Coast Guard Strategy provides this description: “The Coast Guard ensures the safety, security and stewardship of the Nation’s waters. We are the lead Federal agency for law enforcement, incident response, homeland security and disaster management in the maritime environment.”

It is one of the five branches of the U.S. armed forces, and the only one within the Department of Homeland Security, to which it was transferred in 2003.

The Coast Guard reports that during Hurricane Katrina in August 2005, its search and rescue operations alone saved 24,135 lives from imminent danger, including evacuations of patients from local hospitals.

The Coast Guard Academy in New London was built in 1932, but it was originally founded in 1876 on board the revenue cutter Dobbin.

Enrollment at the Academy numbers approximately 700 men and women, according to the Coast Guard. Altogether, the agency has 38,000 active-duty men and women plus 8,000 reservists, enforcing maritime law, protecting marine environment, ensuring port security and aiding in the nation’s defense.

The Coast Guard stamp is offset-printed in panes of 20 by Banknote Corp. of America for Sennett Security Products. The issue has a print run of 15 million stamps.

The Postal Service has printed 1,500 six-pane press sheets (120 stamps), of which 1,000 are processed without the die-cuts that separate individual stamp, and 500 have die cuts. The press sheets are available through USPS Stamp Fulfillment Services for the postage face value of $58.80.

First-day covers are offered by the Postal Service with either a black postmark or a digital color pictorial postmark.

Technical details and first-day cancel ordering information for the nondenominated (49¢) Coast Guard forever stamp are given below.

Standard ordering instructions apply. Collectors requesting first-day cancels are encouraged to purchase their own stamps and affix them to envelopes. The first-day cover envelopes should be addressed for return (a removable label may be used), and mailed in a larger envelope addressed to United States Coast Guard Stamp, Special Events, Box 92282, Washington, DC 20090-2282. Requests for first-day cancels must be postmarked by Oct. 3.

The Postal Service’s uncacheted first-day covers for the Coast Guard stamp is item 473216 at 93¢.