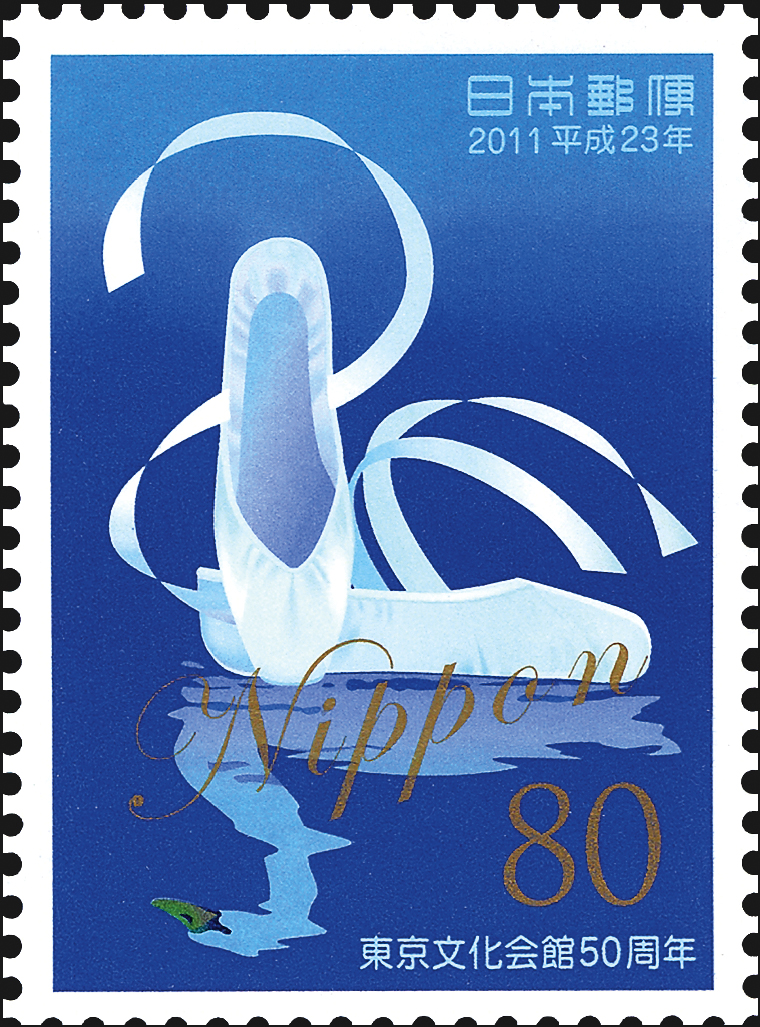 Ballet slippers are featured in the design of Japan’s stamp for the 50th anniversary of the concert hall Tokyo Bunka Kaikan. 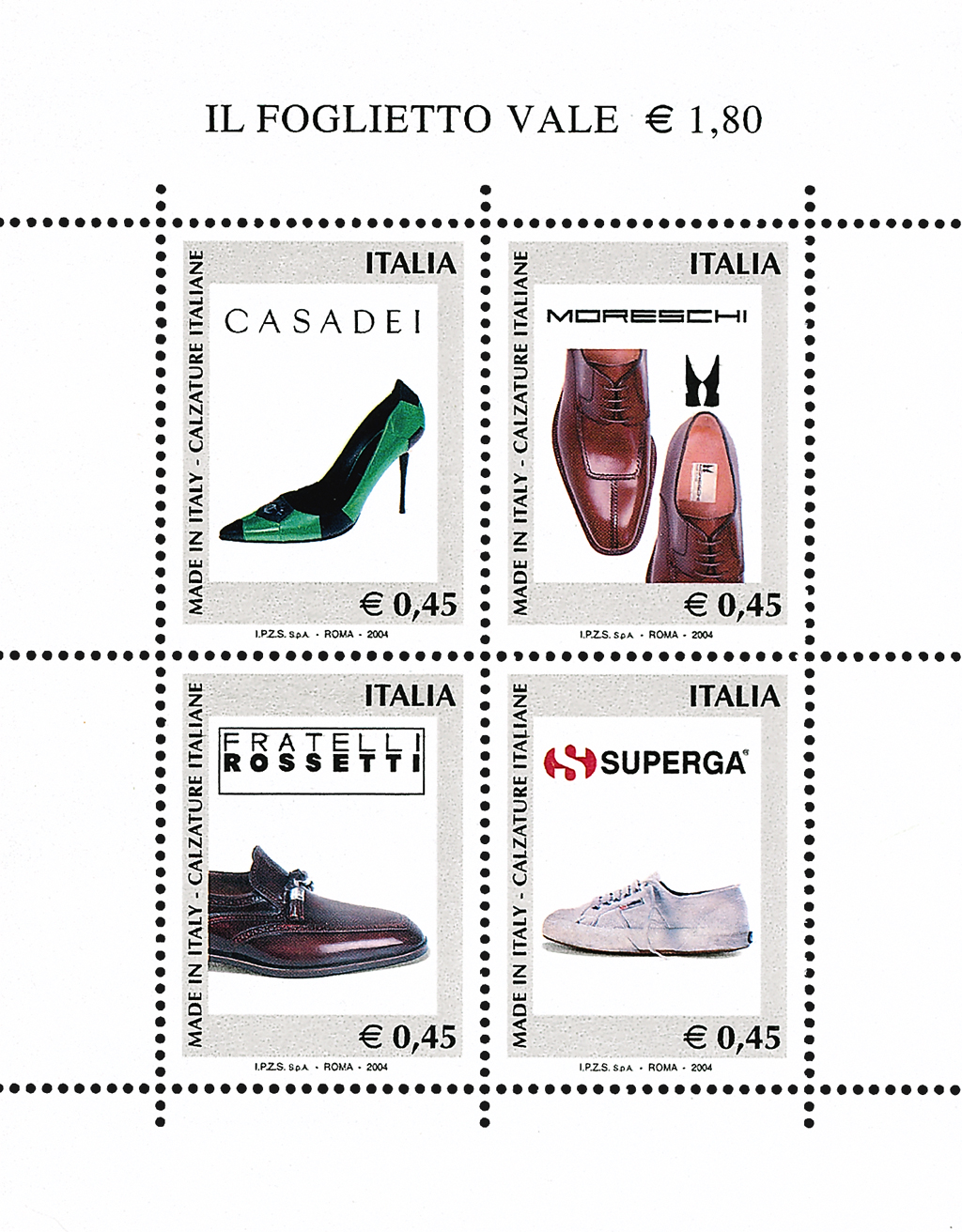 A pane of four Made in Italy stamps issued in 2004 is devoted to Italian shoe brands. 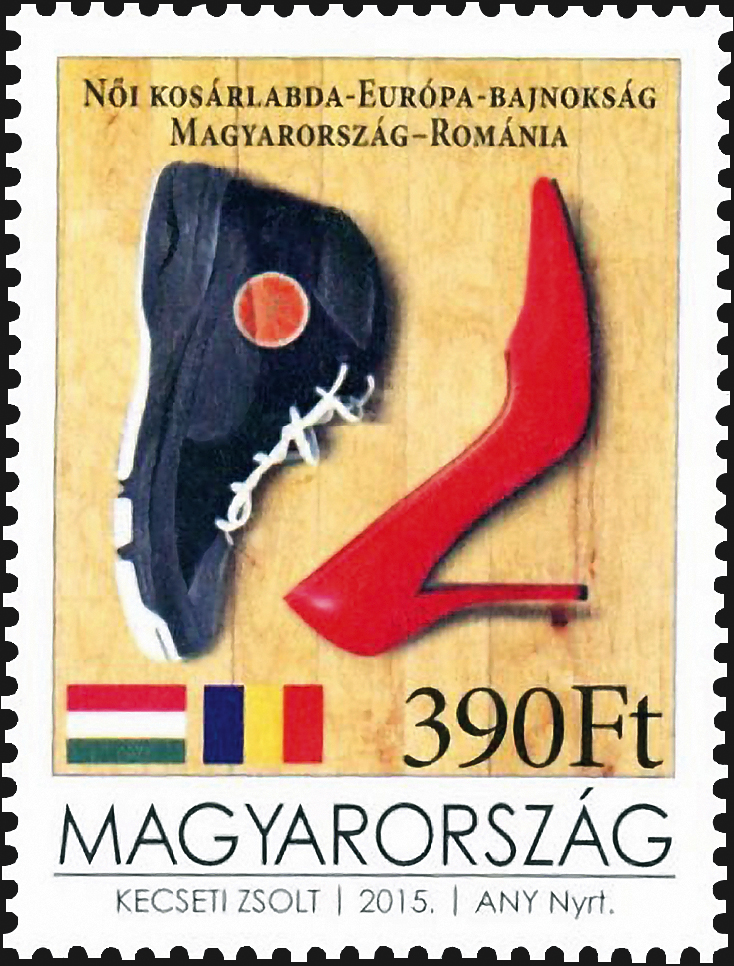 Hungary combines a basketball shoe with a high heel on this stamp honoring the 2015 European Women Basketball Championship. 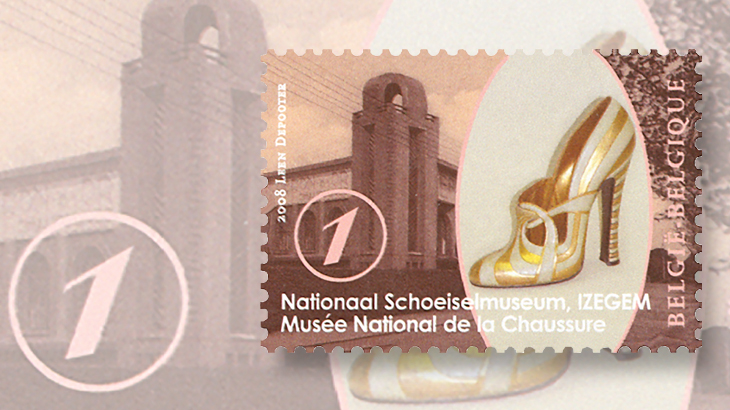 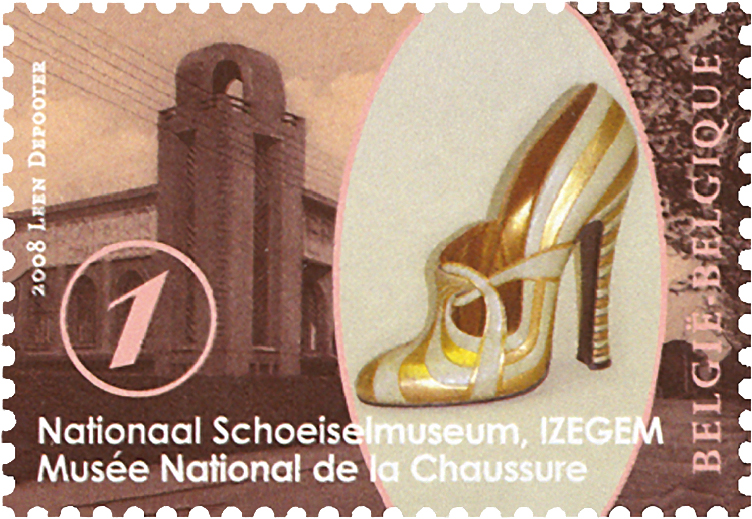 A 2008 stamp from Belgium commemorates the National Footwear Museum in Izegem. 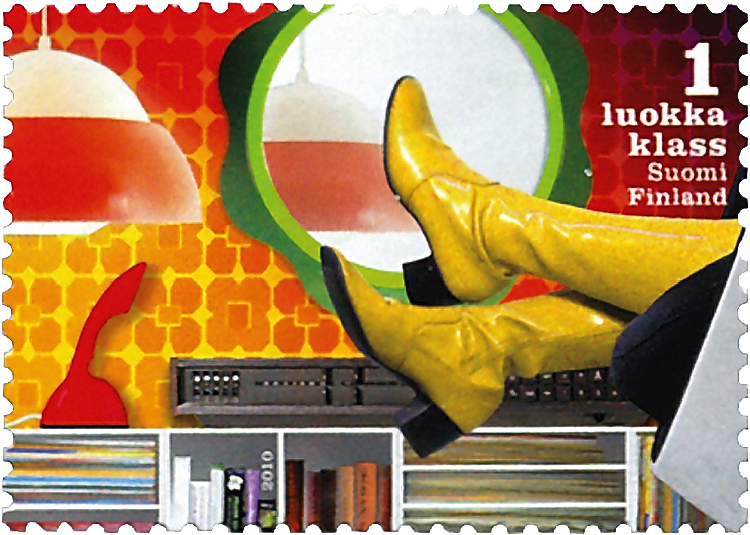 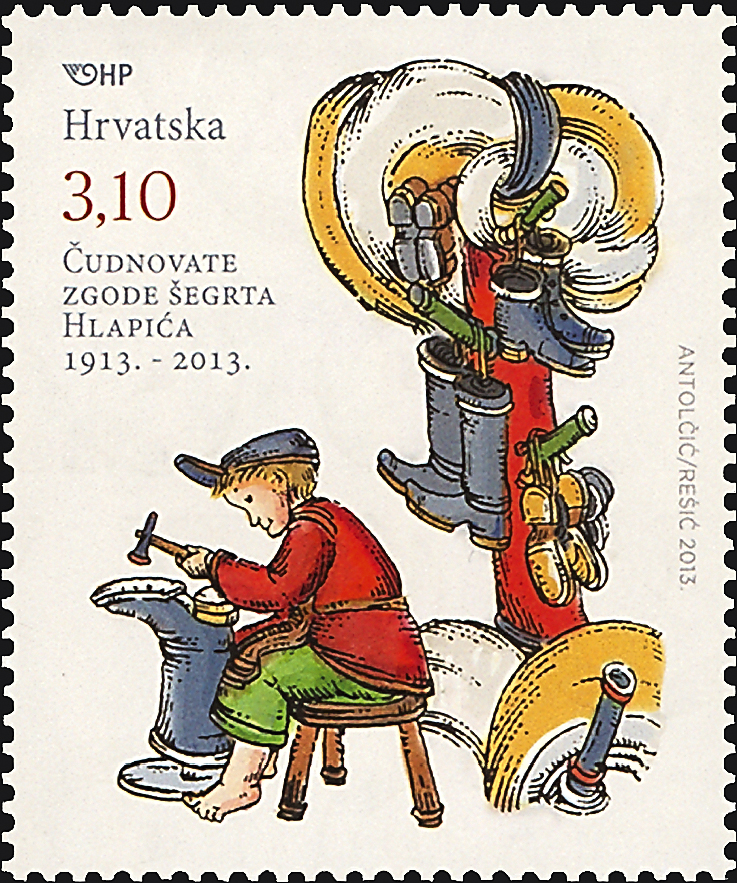 A stamp from Croatia marks the 100th anniversary of the children’s novel Lapitch the Little Shoemaker by Ivana Brlic Mazuranic. 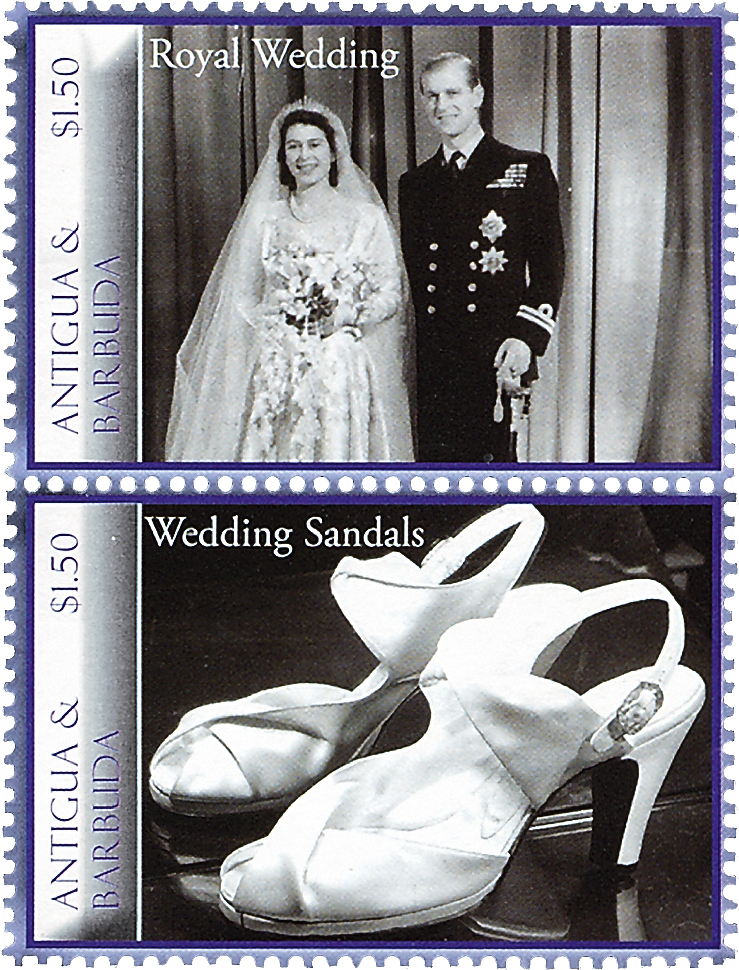 A 2007 Antigua and Barbuda stamp celebrating the 60th wedding anniversary of Queen Elizabeth II and Prince Philip shows her wedding shoes.
Previous
Next

If you agree with the maxim “you can never have too many shoes,” you may want to start examining postage stamps for the variety of footwear found there.

A good place to begin on a philatelic shoe-hunting expedition is Belgium’s 2008 commemorative honoring the National Footwear Museum (Scott 2337). The museum is located in Izegem, a former shoemaking center.

The nondenominated first-class stamp shows the museum in the background, and a gold and white pump with what looks like a 5-inch heel in the foreground.

More recent fashions in women’s heels can be found on stamps of Finland, Iceland and Italy.

On May 6, 2009, Finland issued a pane of five stamps dedicated to women’s fashion. Red shoes with a heart cutout by Minna Parikka are pictured on one stamp (Scott 1339d) and a pair of peep-toe pumps by Julia Lundsten on another (1339e).

Four Italian shoe brands are honored on a pane of four Made in Italy stamps issued Nov. 27, 2004 (Scott Italy 2639). Starting in the upper left, these €0.45 stamps feature a green stiletto pump by Casadei, men’s shoes by Moreschi and Fratelli Rossetti, and sneakers by Superga.

When menswear fashion designer Silar Adler of Soulland was asked to design a stamp for Denmark, he included one men’s shoe in the design. This 8-krone stamp was issued Aug. 4, 2011 (Scott 1551), in a souvenir sheet with another stamp designed by Malene Birger.

One of the newest shoe stamps was issued June 4 by Hungary to mark the 2015 European Women Basketball Championship hosted by Hungary and Romania. Hungry’s Magyar Posta explains that the stamp depicts both a basketball shoe and a red high heel to reflect the diversity of sportswomen.

As for other sport shoes, golf shoes are pictured on two stamps (one moisture-activated and one self-adhesive) in Australia’s Sept. 27, 2011, set commemorating the 2011 President Cup Golf Tournament in Melbourne (Scott 3567 and 3572, respectively).

A soccer shoe is prominently shown on a 2011 stamp of Austria (Scott 2333), while New Zealand depicts rugby boots on a 1994 stamp (Scott 1217). The former stamp marks the 100th anniversary of the Austrian soccer championships, and the latter is from a booklet dedicated to items associated with New Zealand. Called Kiwiana, this booklet also includes stamps showing jandals, a word derived from “Japanese sandals” (1213), and gumboots (1216).

In announcing the Kiwiana booklet, New Zealand Post said, “The gumboot is worn by all ages from puddle-stamping school children to retired suburban gardeners wanting to keep their feet dry. Out on the farm gumboots are as common as the black singlet [also shown on the stamp], perhaps even more so. Gumboot throwing is a recent novelty sport that has been fostered in the town of Taihape — the ‘Gumboot Capital’ of New Zealand.”

Boot throwing also is enjoyed in Finland, and it is illustrated on a stamp issued May 6, 2013 (Scott 1431b), part of a set highlighting some of the nation’s more unusual sports.

At the other end of the culture spectrum, two stamps of Finland feature dance shoes. Helene Schjerfbeck’s lithograph Silk Shoes is reproduced on one of the four stamps issued Jan. 23, 2012, to honor the artist (Scott 1393d). Finland’s post office said that this 1938 lithograph “typifies a central theme of the artist’s decades-long career — dancing shoes.”

In some stamp designs, shoes have been used to denote a particular era. For example, saddle shoes symbolize teen fashions of the 1950s on a 33¢ stamp in the United States Celebrate the Century series (3187b), while a pair of yellow go-go boots represents the 1960s and early 1970s on a stamp in Finland’s Antique series (Scott 1361).

Some shoe-related stamps reflect nostalgia for occupations of the past. Both a cobbler and a cobbler’s apprentice are pictured on stamps in Berlin’s 1969 set featuring 19th-century Berliners (Scott German Occupation Stamps/Berlin 9N271 and 9N270, respectively).

In 2013, Croatia issued a stamp commemorating the 100th anniversary of the children’s novel Lapitch the Little Shoemaker by Ivana Brlic Mazuranic .

Delving into the world of fairy tales on stamps yields even more shoes, including a Walt Disney version of The Elves and the Shoemaker on four stamps and a souvenir sheet from Grenada-Grenadines (Scott 717-721); the title cat from Puss in Boots sporting red boots on a 1968 stamp from Poland (1569); and the prince with slipper in hand on a German semipostal showing a scene from Cinderella (B410). A giant shoe is pictured on a pane of six stamps from Grenada illustrating the nursery rhyme There was an Old Woman who Lived in a Shoe.

Historical shoes are pictured on stamps as well. For instance, Queen Elizabeth’s satin wedding shoes are featured on one stamp in an Antigua and Barbuda se-tenant pair celebrating the queen’s 60th wedding anniversary in 2007 (Scott 2965). Algeria shows wooden sandals probably made for a 19th-century bride on a 2009 stamp in a set illustrating items in museums (1457).

If none of these fit your taste, may I interest you in canvas espadrilles on a stamp from France (Scott 3505a), cowboy boots on a Norfolk Island stamp promoting a country music festival (1060), wooden shoes on a recent definitive from the Netherlands (1461j), or the dozens of other shoes on stamps?