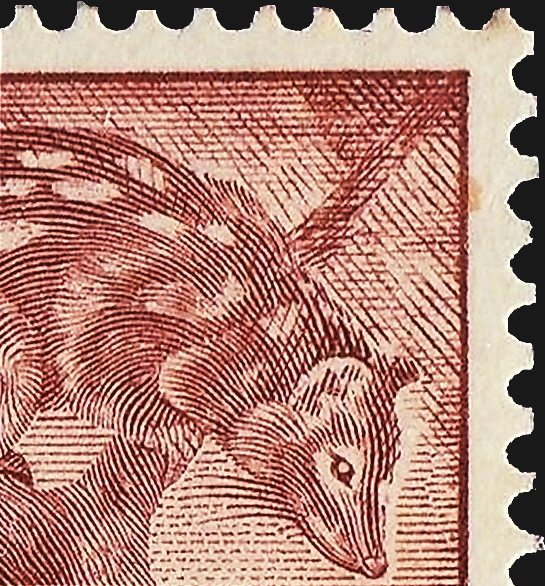 This enlarged detail of an 8d Tiger Cat stamp shows the “typhoon” variety, resembling a tornado heading for the animal. 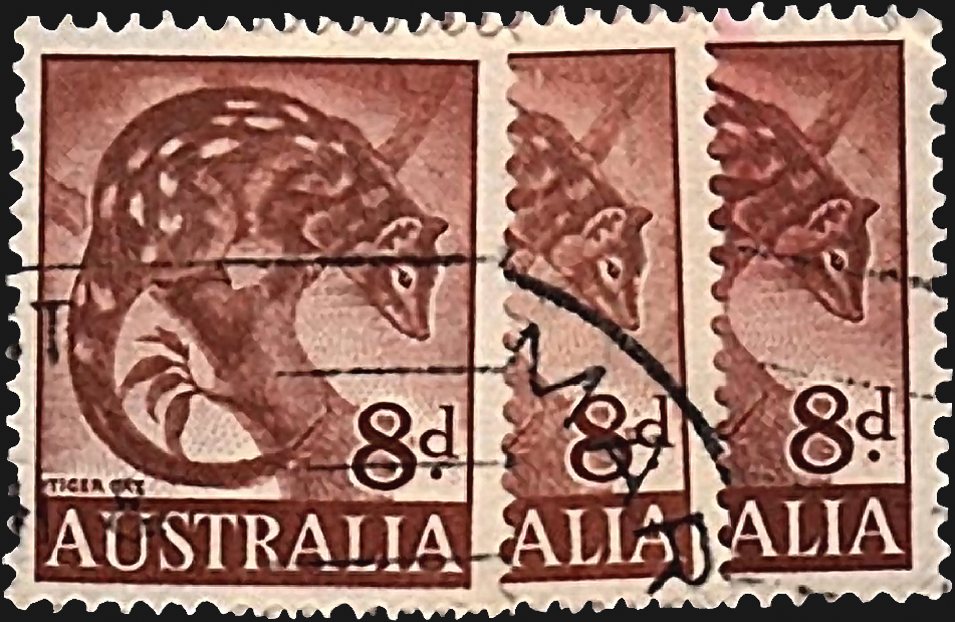 The master printing plate for the 8-penny Tiger Cat issue was retouched, causing varieties in the upper-right corner of the resulting stamps. 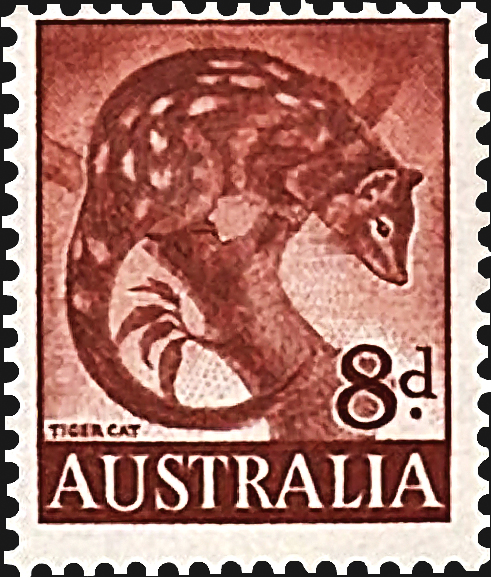 The tiger cat or tiger quoll is approaching endangered status in its native lands of Australia, New Guinea and Tasmania. 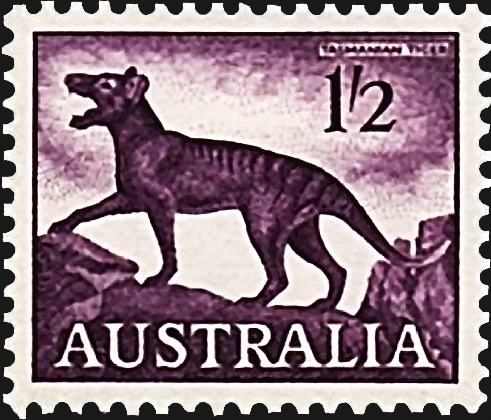 Now extinct, the Tasmanian tiger is remembered on this 1962 definitive stamp. 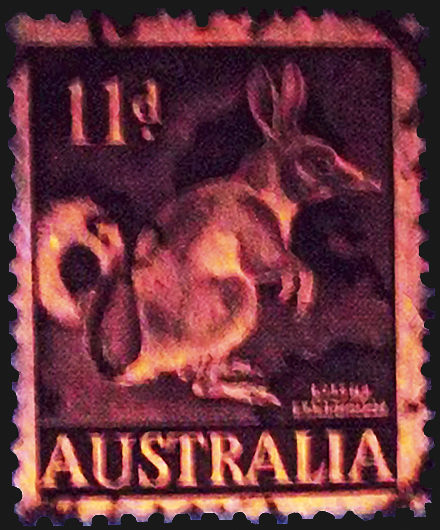 The 11d Rabbit Bandicoot stamp was printed on helecon-coated paper, which reacts to ultraviolet light by fluorescing. 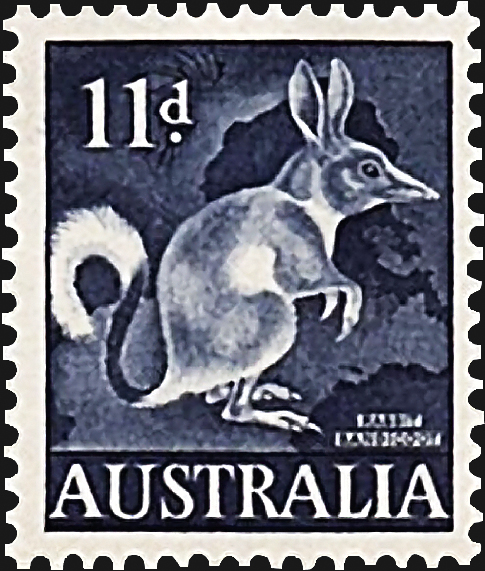 The rabbit bandicoot, also known as a bilby, is another endangered native animal on the six definitives from 1959-62. 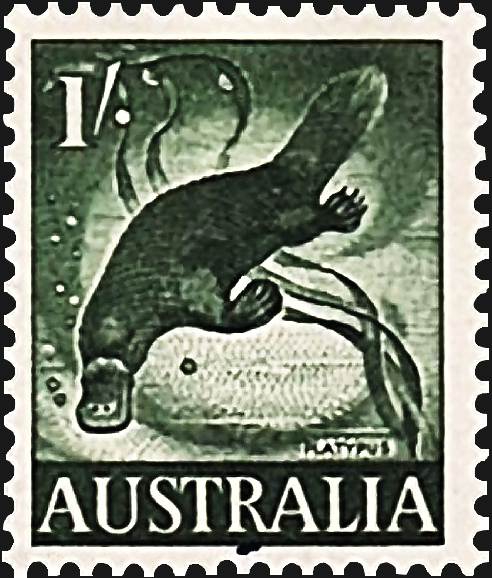 There are still plenty of platypuses in Australia, because it was shown on a 1959 definitive stamp. 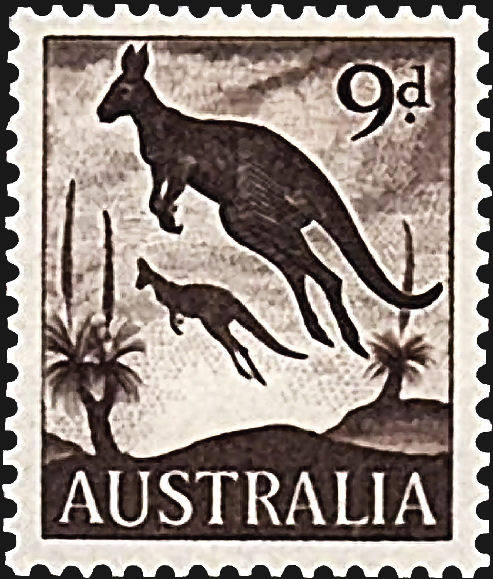 The kangaroo is a popular subject on the stamps of Australia. This 9-penny stamp is from the 1959-62 series. 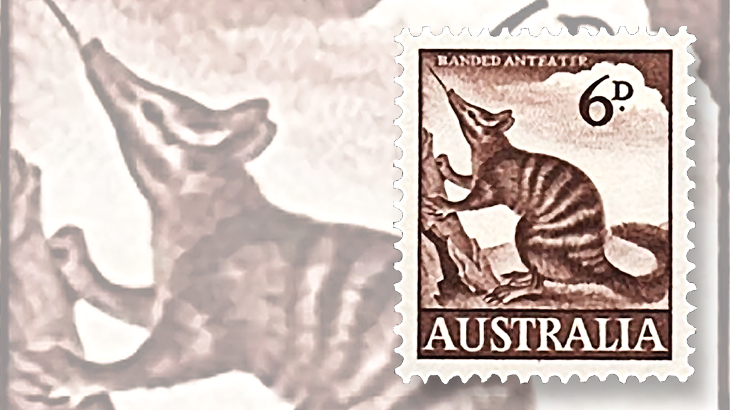 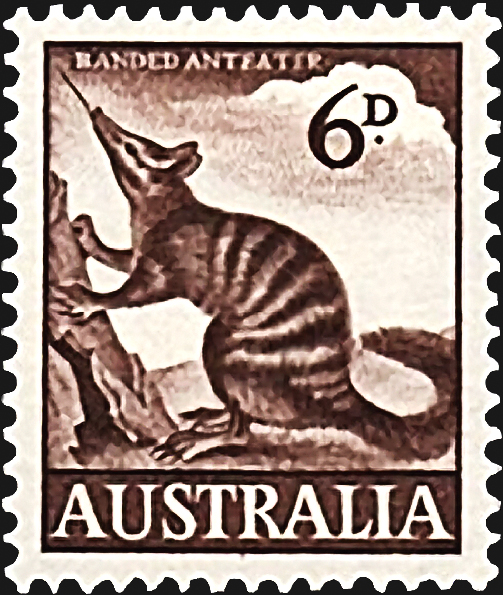 Common stamps are called that because they are, well, common, except for when they’re not.

In addition to depicting six cute and interesting marsupial critters, several of the stamps have known varieties that include plate retouches, shades of color and paper types.

One of the stamps, the 11d Rabbit Bandicoot, became a guinea pig in an Australia Post experiment.

The testing was for paper that was coated with helecon, the trade name for a fluorescent phosphor substance. Helecon-coated paper caused the stamp to fluoresce pinkish-orange when subjected to ultraviolet light, enabling automated mail-processing postmarking equipment to detect where the stamp was on the envelope and apply the postmark where it needed to be.

The 11d Rabbit Bandicoot stamp was issued originally on ordinary paper on May 3, 1961.

In 1963, 4 million 11d stamps were printed on the helecon-coated paper, but that printing proved to be unsatisfactory. Nevertheless, the experimental stamps were released in December 1963. One of the stamps is illustrated here, glowing under the influence of UV light.

From then until June 1965, these were the only Australian helecon stamps available to the general public. That relatively short experimental period provides collectors with an opportunity to seek rather scarce used helecon 11d stamps.

After June 4, 1965, all Australian stamps were printed on helecon-coated paper. The 11d denomination was used primarily to pay the combined fee for postage for the domestic letter rate plus certified service.

Two other stamps in the Australian native animals set — the 8d Tiger Cat and the 1sh2d Tasmanian Tiger — were printed on helecon-coated paper in April 1965. Although issued in significantly smaller quantities than the earlier stamps of the series, the helecon varieties do not have substantially higher value.

The 8d Tiger Cat stamp has many interesting varieties caused by retouches made to the master plates from which the printing plate was made.

Most of the retouches can be quite difficult to spot, but it is fairly easy to see the changes made in the upper-right corner of the stamp.

Look at the illustration showing three of the 8d Tiger Cat stamps. In the upper-right corner, above the animal’s head, is the continuation of the tree limb upon which the tiger cat is sitting. The stamp on the left shows a branch growing out to the left of the main limb. The center stamp’s limb has a missing branch, probably due to retouching. The stamp on the right shows the effects of even more retouching in that upper-right corner, as well as some retouching of the lines around the head of the tiger cat.

The retouching of the shading in the upper-right corner of the 8d Tiger Cat stamp continued until a named variety occurred, shown here in a high-detail illustration.

This is known in Australia as the “typhoon” variety; in America it could be the “tornado” variety. By either name, it appears to be a twister bearing down on the tiger cat.

This little six-stamp grouping is easy to collect but a lot more fun if you start looking for some hard-to-spot varieties. Those varieties can add not only interest but some significant value to your collection.