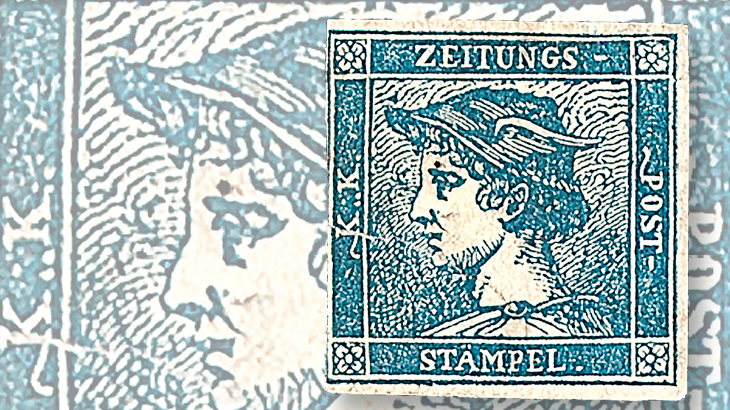 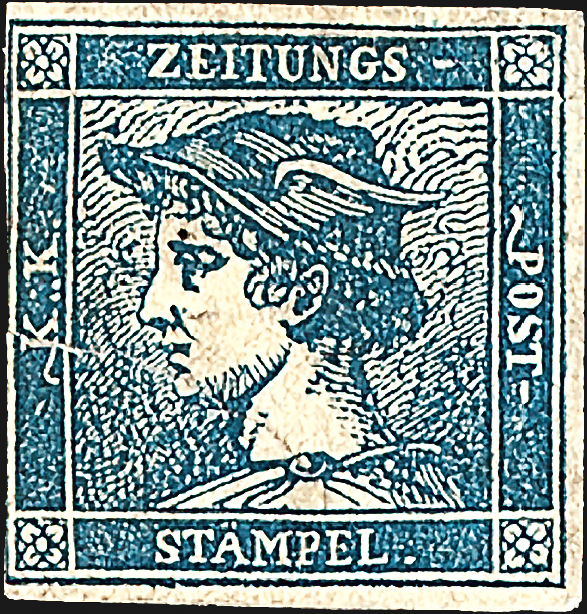 Mercury, messenger of the gods, helped to speed newspapers on their way in the Austrian mails beginning in January 1851.
Previous
Next

The first newspaper in Austria was published in 1605, and for many years newspaper publishers paid postal fees, in cash, to mail copies of their publications.

Writing in The Collectors Club Philatelist of January 1951, Edwin Mueller suggested that the first postage stamp of the Austrian monarchy, issued in 1850, prompted the idea of a similar adhesive stamp to prepay newspaper postal fees. Other researchers have suggested that the idea of dedicated newspaper stamps was primarily for financial reasons: to simplify accounting procedures for the Austrian post offices. Both theories could be true, of course, and it does seem possible that the surge in newspapers at the time was causing so much extra work in the post offices of Austria that any helpful ideas — such as stamps to speed newspaper processing — would have been hailed with delight.

The revolutions of 1848-51 in Europe, beginning in France, sparked numerous political and social reforms. Responding to popular interest and decreased censorship, journalism burgeoned in Europe. In the Austrian Empire there were 79 newspapers before the revolution, only 19 of which had permission (with censorship) to discuss politics. In 1848, the number of papers rose to 388, with 306 of them discussing politics, and without censorship. Newspaper had to be  piling up at post office loading docks.

An official Austrian postal decree dated Aug. 12, 1850, announced that a stamp would be produced for the exclusive use of publishers for franking newspapers mailed to subscribers. The stamp would pay the discounted inland postage rate (within Austria and also in Lombardy-Venetia, created in 1815 and part of the Austrian Empire until 1866) for newspapers, per copy and regardless of weight.

Kenneth Wood, in his 1985 book, Post Dates, described the design of the stamp (Scott P1) as “a rather crude representation of Mercury.” Actually, the stamp’s printing rather than its design deserves the blame for the unrefined appearance of the issue.

The vignette is a left-facing profile of Mercury, the figure in the Roman pantheon (Hermes in the Greek equivalent) who symbolized communication, serving as messenger to the other gods with the aid of his winged sandals and petasos, a floppy ancient Greek sun hat with wings added.

The artist is unknown, but a drawing of a suggested design was presented to postal officials shortly after the decree of Aug. 12 and approved on Aug. 26. The stamp would have no denomination on it, but would be valued at 0.6 kreuzer, the postage fee for a single newspaper.

The engraving of the approved design was the work of an esteemed and prolific Austrian engraver, Josef Axmann (1793-1873). Mueller, writing in 1951, knew of seven surviving recess-printed proofs on India paper of Axmann’s engraving of the Mercury stamp.

Postal authorities liked Axmann’s proofs but decided that recess printing was too expensive and that the newspaper stamps would be printed by typography, as were regular Austrian postage stamps at that time. Axmann’s Mercury engraving was handed over to Friedrich von Exter, head of the Austrian State Printing Works’ xylography (making engravings on wood for use in relief printing) department since 1846. Mueller said that the original woodcut for the stamp is in the Austrian Postal Museum in Vienna.

A production order was given to the Austrian State Printing Works in Vienna on Sept. 12, 1850, and the regulations regarding the new stamps were published that same day. Prepayment of postage fees for newspapers would begin on Jan. 1, 1851, the day the 0.6kr stamp would be released.

Proofs were delivered in early November 1850 and approved, and the first printing order was given. Mueller said that the initial printing was for 12 million.

Matrices had been made in gypsum of von Exter’s woodcut and then cliches were cast in type metal that was rather soft and quickly showed wear and tear during use, resulting in blurred images on the stamps. The stamps were printed on steam-driven cylinder presses — rather carelessly, according to Mueller — with overinking common.

The stamp paper was unwatermarked machine-made paper (Austria’s postage stamps were on handmade paper) and the ink was blue. The stamps were printed in sheets of 400, separated into panes of 100. The stamps were gummed and imperforate. Between overinking and worn plates, the stamps did have an unfortunately primitive appearance.

Mueller said this rule allowed the post office to ensure compliance with the regulations and to prevent fraudulent use, but it also supports other researchers’ contention that the newspaper stamps were created at least in part as accounting tools. Keeping both the sale and the use of the stamps within a single post office would simplify the financial records for these bulk mailings.

The blue Scott P1 was the first and most humble of the eventual four newspaper stamps of 1851. It sold for 60 kreuzer per pane of 100. Two other nondenominated newspaper stamps of 6kr (P2) and 30kr (P3) issued later in 1851 meant that fewer stamps had to be affixed to meet the fees on large quantities of newspapers being mailed from publishers to distributors in cities.

Mueller noted that the blue 0.6kr stamp would be quite common “if most of the stamps used had not been destroyed.” He quoted a 1926 article by E.J. Jaszai that said the eventual total printing of the issue was almost 136 million.

The stamped wrappers on bundles usually were removed and discarded. Some publishers did not use wrappers, instead pasting address labels directly on the newspapers and affixing the stamp(s) partly on the address label and partly on the newspaper. This practice did not conform exactly to the regulations but evidently was tolerated, because examples of such usage have survived. Fortunately, some wrappers with stamps also were preserved when a newspaper was retained, unread or as a file copy.

In his 1951 Collectors Club Philatelist article, Edwin Mueller said that “Collecting ‘Mercuries’ is a pleasant and attractive task.” He might have added, it also is not an inexpensive task (especially the 6kr stamp known as the “Red Mercury,” Scott P4, one of the great stamp rarities in the world).

The Scott Classic Specialized Catalogue of Stamps and Covers 1840-1940 lists and values 16 different kinds of Scott P1 stamps — no gum, on a wrapper, on a newspaper, and so on — and identifies printing varieties as Type I, where the G has no crossbar; Type II, where the G has a crossbar; and Type IIa, where the rosette is deformed. The least expensive variety is a mint Type IIa stamp with no gum for $30. The most expensive is a Scott P1c (Type II) on a newspaper or wrapper for $750. Watch for reprints and fakes, especially if you are offered supposedly unused, gummed examples of the early Mercuries.