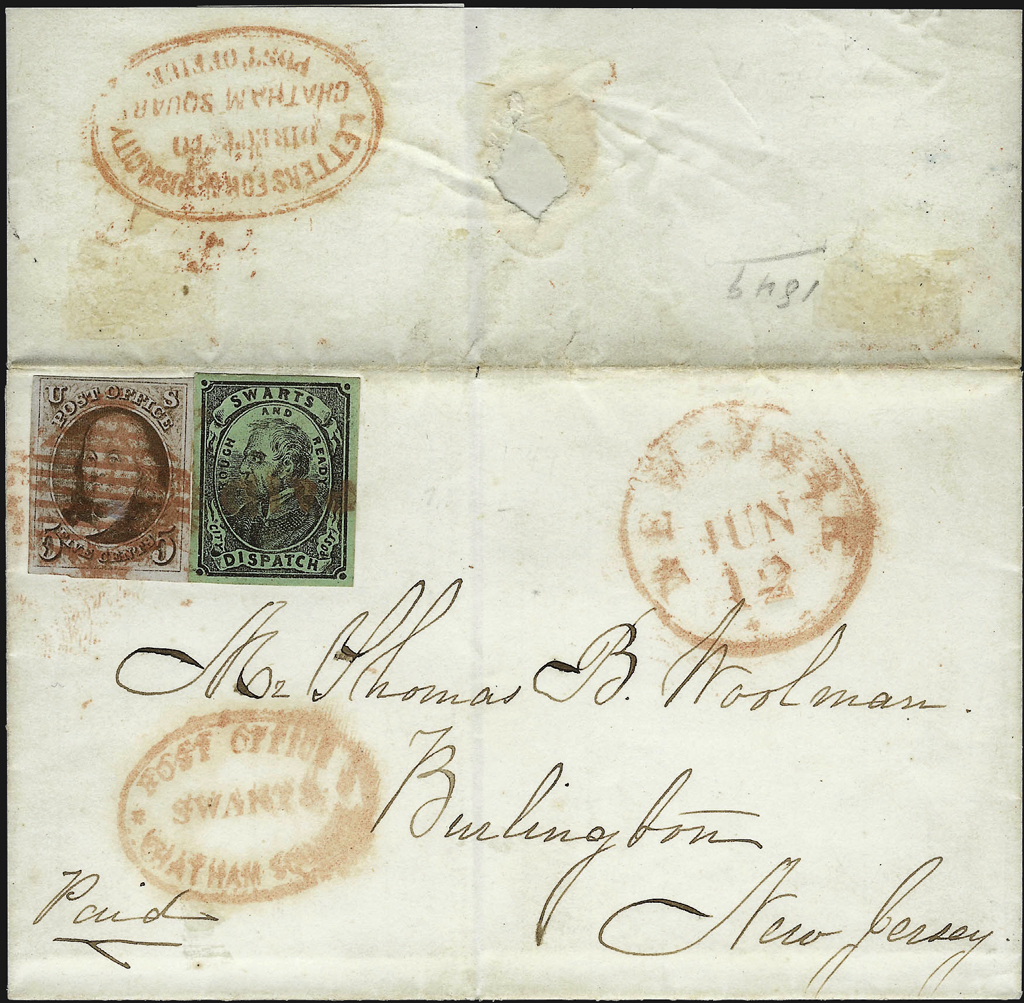 Described by the Siegel firm as “One of the most beautiful 1847 issue and local post combination covers we have ever encountered,” this 1849 cover, ex-Bailar, franked with United States Scott 1 and a Swarts’ City Dispatch Post stamp, sold for $63,250. 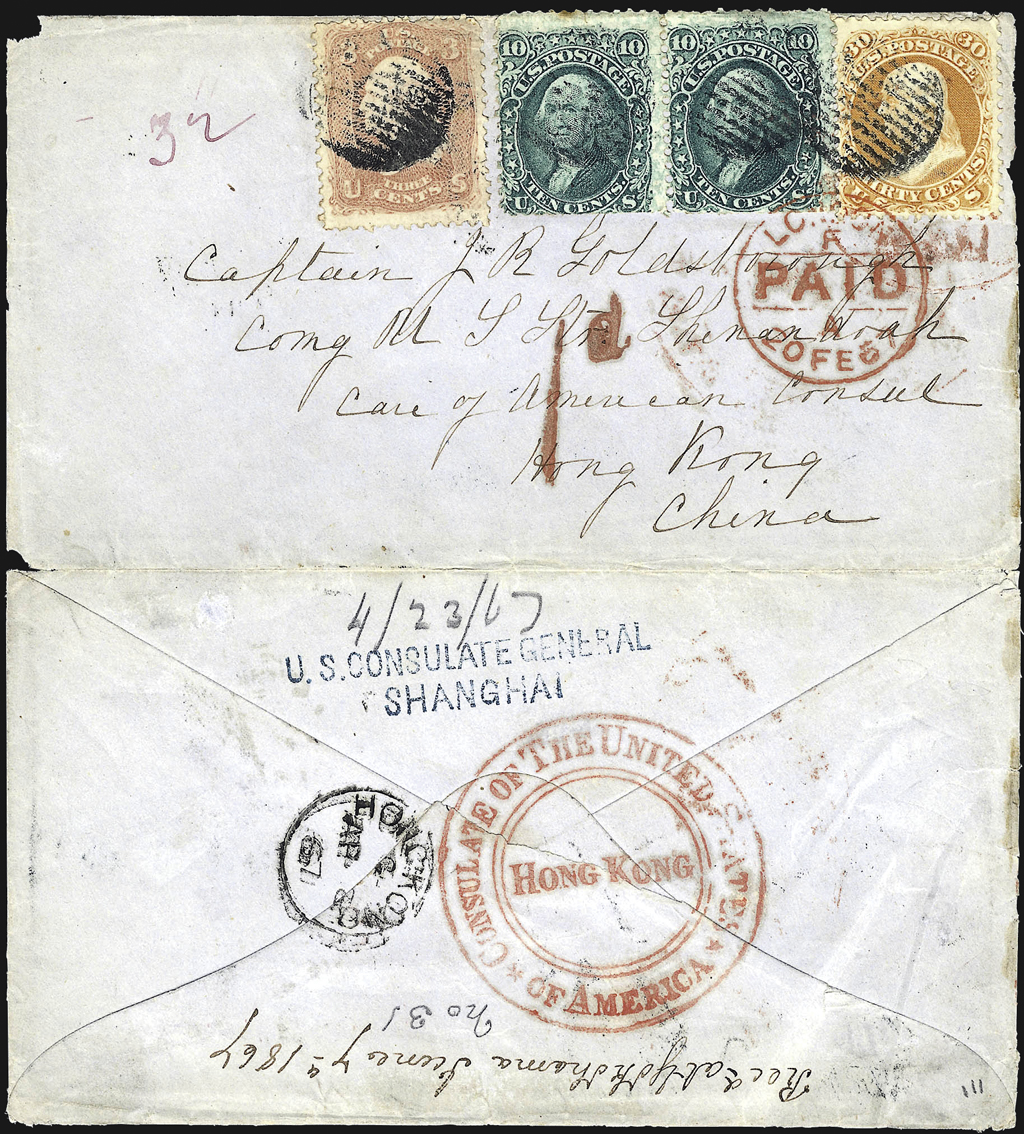 Siegel offered the Benjamin Franklin Bailar collection on June 25. Leading the prices realized was a double-forwarded 1867 cover from New York to China and Japan. It sold for $143,750, nearly four times its presale estimate. 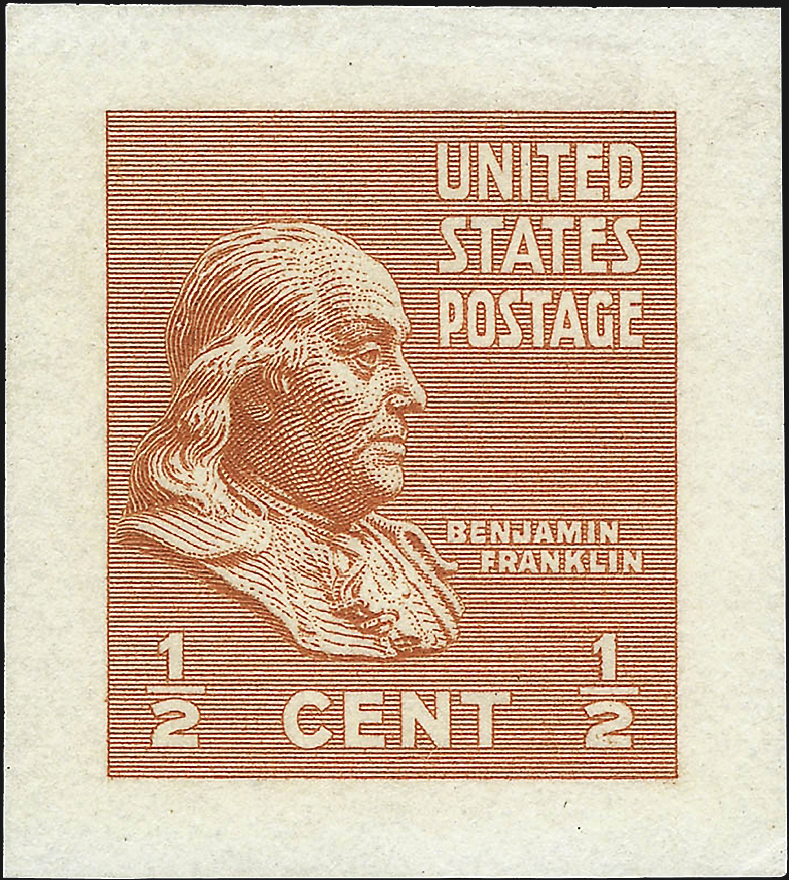 A retirement gift to the engraver who made it, this small die proof of the ½¢ orange Franklin stamp of the 1938 Prexie series was from the Benjamin Bailar collection. The Siegel firm sold it for $2,300 on June 25.
Previous
Next

Bailar, who was appointed by President Gerald R. Ford in 1975 — exactly 200 years after his namesake was commissioned by the Second Continental Congress — is believed to be the only postmaster general in our history who is also a serious collector of stamps and postal history.

He began collecting stamps in the early 1970s but, on the advice of some lawyer friends, sold his collection in 1975 when he accepted the postmaster general position, lest anyone in post-Watergate Washington accuse him of abusing his power as head of the Postal Service to enrich himself or his fellow hobbyists. After he stepped down three years later, he restarted his collection from scratch.

At first, Bailar focused on stamps showing his namesake, of which the United States has had many, starting with Scott 1, the 5¢ stamp of 1847. But he soon found that collecting stamps left him dissatisfied.

“I really wasn’t interested in a lot of the things hard-core collectors are,” Bailar said in an interview before the sale.

He found that he had little love for examining the minutiae of hand-engraved designs or making a specialized study of ink and paper varieties. Instead, his passion was for the stories that often accompany items that have traveled through the mails.

“I loved the postal history,” Bailar said. “What I wanted to do was build a collection that tells a story.”

He began pursuing items that did just that, beginning with notes autographed by Franklin himself and continuing with pieces that formed a colorful timeline of 250 years of U.S. history. Every piece was connected by the enduring iconography of Benjamin Franklin’s signature, name or portrait.

They included a handwritten letter to Franklin from George Washington; a pair of commission papers signed by Franklin appointing one Abraham Hunt as postmaster of Trenton, N.J.; and a legal document from 1785 datelined in the short-lived State of Franklin, which existed briefly between North Carolina and Tennessee.

Many items bear stamps with Franklin’s likeness, such as a letter carried across enemy lines during the Civil War; another carried via the Pony Express; an envelope bearing a rare, chromolithographed advertisement for a New York City brewery; an electioneering postcard for the short-lived Prohibition Party; a letter mailed from the now-defunct U.S. post office in Shanghai and another from the one-time U.S. War Department headquarters in Cuba; letters that traveled on Graf Zeppelin flights to Tokyo and other destinations, and more.

“What he did is more akin to what museums do and less akin to what collectors do,” noted Trepel before the sale. “Every piece tells a story.”

“There are some items in this collection I did not know I wanted until I saw them offered,” Bailar wrote in the introduction to the sale catalog, which is still available as a free download from siegelauctions.com.

Bailar said he is named after his maternal grandfather, following a family tradition, but that as far as he knows, his family is not descended from Franklin. It never crossed his mind when he was growing up that he might someday fill his namesake’s shoes, Bailar said. With his Harvard MBA and his business background in finance, he was tapped by a friend to help manage the Postal Service after it was reorganized in the early 1970s “to be run more like a business,” he recalled.

Among his accomplishments in office were negotiating a settlement to avoid a postal workers’ strike and arranging a joint stamp issue with Canada in honor of Ben Franklin’s service as postmaster general of both countries under the British crown, prior to the American Revolution.

From 2006-14, Bailar served on the Citizens’ Stamp Advisory Committee, the group that reviews proposals for new U.S. stamp subjects. He eventually resigned in protest at what he saw as the increasing commercialization of U.S. stamp designs, such as Disney and Pixar film characters, Star Wars characters, and the 20-stamp set for Harry Potter that seemed to flout a long-held rule against showing living persons on U.S. stamps.

The top price in the Bailar sale went for an extraordinary double-forwarded 1867 cover from New York to China and Japan. The cover was first sent to Hong Kong, then onwards to Shanghai and Yokohama, before it met up with its recipient, Capt. Goldsborough of the USS Shenandoah. The letter’s journey is all the more remarkable because it passed through these cities prior to the establishment of U.S. post offices there, so it picked up some rare, soon-to-be-obsolete postmarks on the way.

An 1849 cover from New York to New Jersey, bearing an 1847 5¢ Franklin (Scott 1) and a (2¢) black Swarts’ City Dispatch Post stamp on light green glazed paper (136L1) fetched an impressive $63,250. The Siegel firm called it “One of the most beautiful 1847 issue and local post combination covers we have ever encountered.”

One of the more poignant items in the Siegel sale told a story about Bailar, from shortly after his retirement as postmaster general. A friend presented Bailar with a favorite item from his earlier collection that had been sold, something he had feared was gone for good: a small die proof of the ½¢ orange Franklin stamp from the 1938 Presidential series (Scott 803P2).

Die proofs of 19th-century stamps are comparatively common, because they were used as sales samples by the banknote printing firms, but die proofs of 20th-century issues are rare. Originally presented as a retirement gift to the engraver who created it, the ½¢ Prexie piece is probably unique outside of government archives.

Bailar’s friend had bought it anonymously at the 1975 auction of his old collection, and quietly held onto it for him for three years. The ½¢ Prexie die proof sold for $2,300 in the June 25 sale.