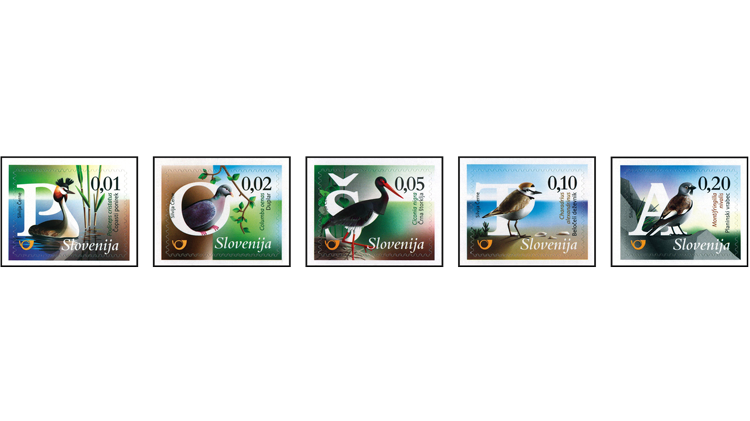 Slovenia has included one letter in each of the designs of its latest Birds of Slovenia stamps. When the stamps are put in order by denomination, they spell the word “Posta.” 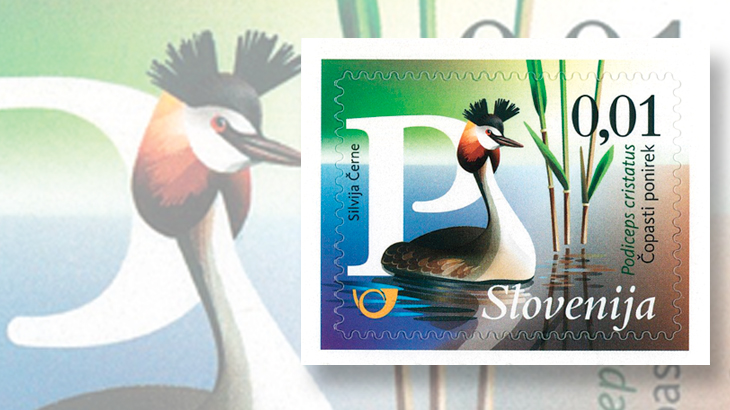 Five recent stamps from Slovenia not only picture birds, they also spell out the word “Posta” when placed horizontally in order of denomination.

Posta Slovenije (Slovenia’s post office) issued these self-adhesive definitive (regular-issue) stamps May 29. They are the second set in the Birds of Slovenia series.

The first set, released May 30, 2014, did not spell out “Posta” or any other word across the different designs.

The €0.01 denomination in the new set shows a great crested grebe (Podiceps cristatus) with a large “P” on its left and aquatic plants on the right. The black plumes on either side of this grebe’s head are only present during breeding season.

On the €0.02 stamp, a stock dove (Columba oenas) is perched inside an “O” that resembles a hole in a tree. This pigeon generally nests in such holes, especially those created by the black woodpecker (Dryocopus martius).

A black stork (Ciconia nigra) stands on one leg in front of the “S” on the €0.05 stamp. This stork is smaller than the white stork (37 inches to 39 inches in body length, compared to 39 inches to 45 inches) and also is more shy and wary of humans.

A Kentish plover (Charadrius alexandrinus) partially blocks the “T” on the €0.10 stamp. A rare summer visitor to Slovenia, this plover nests on hollows in the ground in the Secovlje salt works and on the muddy islands of the Skocjanski Zatok wetlands.

The €0.20 high denomination of the set shows a white-winged snowfinch (Montifringilla nivalis) and an “A” standing on a rocky mountainside. Actually a sparrow instead of a finch, this bird lives on rocky ground above the treeline in mountainous areas in parts of Europe and Asia, including the Julian Alps and the Karavanke in Slovenia.

Silvija Cerne designed the stamps. Oriental Security Printing in Bahrain printed them by offset in sheets of 50.

Spain is among the other countries issuing stamps this year to promote the International Year of Soils.

The new-issue announcement begins: “Spanish philately is joining with the message of the United Nations, who declared 2015 the ‘International Year of Soils.’ The image shows the contrast of fertile soil with the food produced from it and a forest full of plants, alongside cracked, barren soil resulting from the deterioration of the ecosystem.

“As a new feature, the stamp has several petunia seeds inside along with the slogan: ‘Renew the soil. Plant me.’”

This was the second Spain stamp issued in June featuring both the United Nations and seeds.

The seeds represent the production of food to alleviate hunger. A hand picking the seeds also is included in this design.

Another recent stamp from Spain celebrates the setting of a Guinness record for creating the world’s largest stamp mosaic.

The mosaic was unveiled the next day, and according to the Guinness World Records website, www.guinnessworldrecords.com, it measured 2,371 square feet (220.28 square meters).

Spain stamps issued in 2011 were used for the mosaic, according to a March 13, 2015, announcement from the World Record Academy.

The announcement added that the stamps would have otherwise been destroyed at the Spanish Royal Mint.

This emblem from the mosaic is shown on the new 0.42 stamp. A se-tenant label pictures another view of the large creation.

Correos issued this stamp May 27 in sheets of 12 stamps and 12 labels.

According to Correos, there were two reasons for creating the mosaic: to set a world record, and to bring “the world of stamps closer to the public in a fun and innovative way while demonstrating how stamps can be culturally educational and entertaining for young people.”