BNAPS spreads the good word about Canada and its philatelic wonders 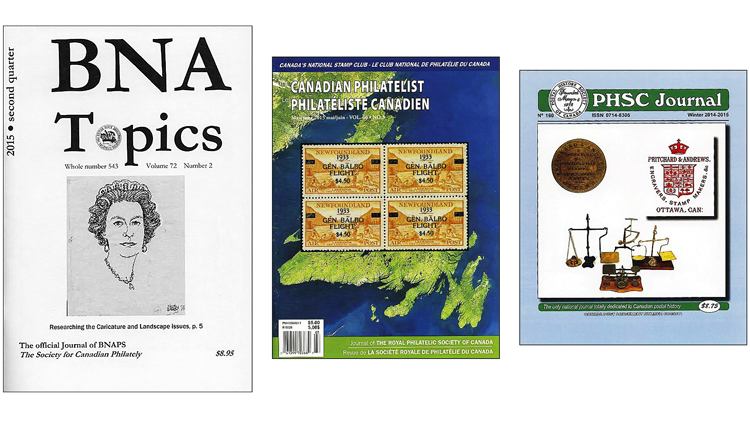 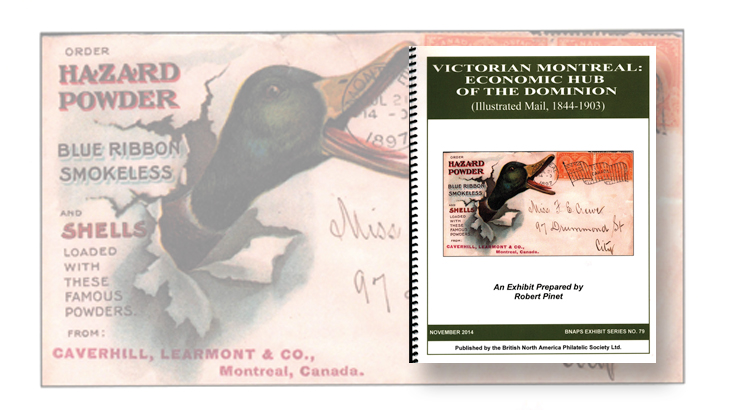 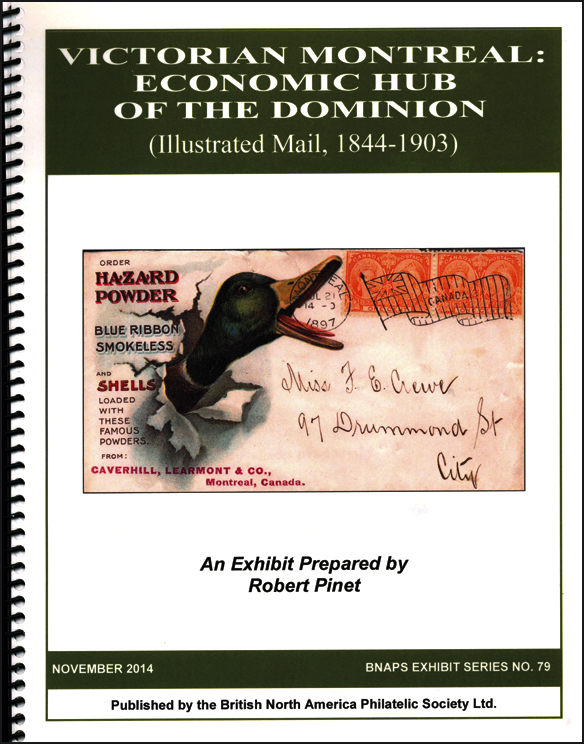 Robert Pinet’s Victorian Montreal: Economic Hub of the Dominion is an outstanding 88-page display of a mature International Large Vermeil-winning exhibit of illustrated mail from the late pre-stamp era to the dawn of the 20th century. 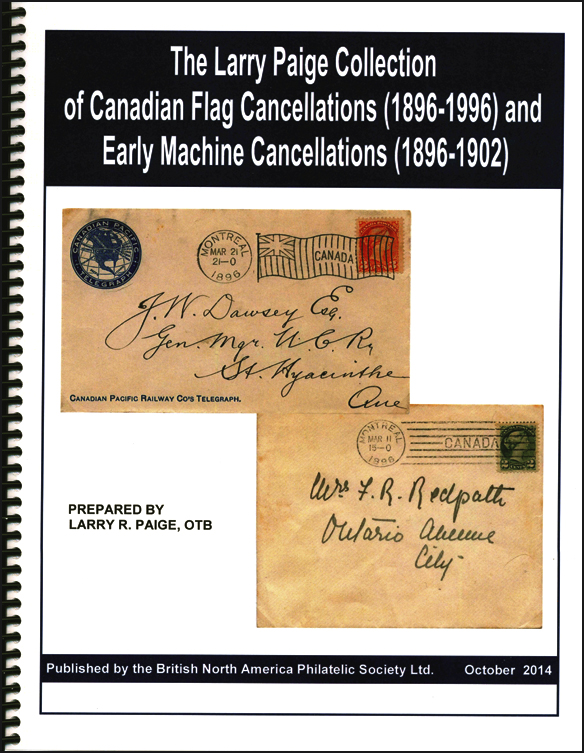 Although its nucleus won APS Champion of Champions honors 38 years ago, The Larry Paige Collection of Canadian Flag Cancellations and Early Machine Cancellations grew with the addition of new material in the decades since to become a 406-page handbook. 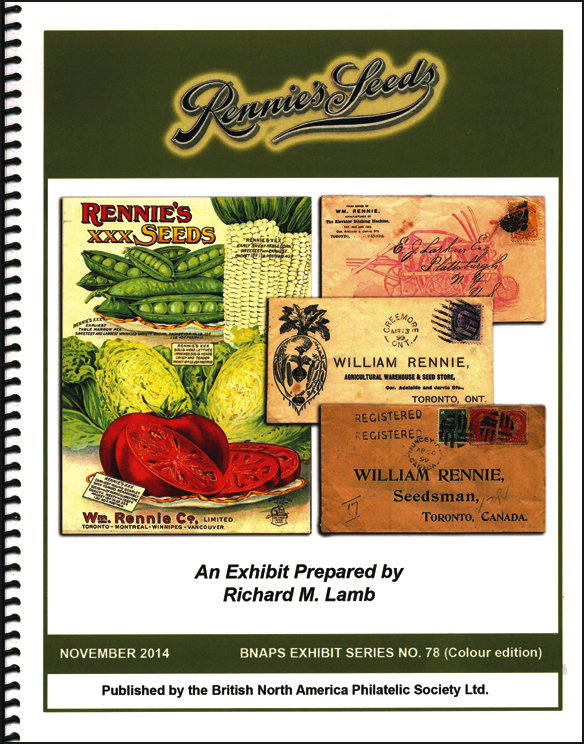 Rennie’s Seeds by Richard Lamb is a colorful 90-page exhibit that follows the growth and success of one of the great Canada direct mail-order businesses of the 19th century, which lasted through generations until 1960. 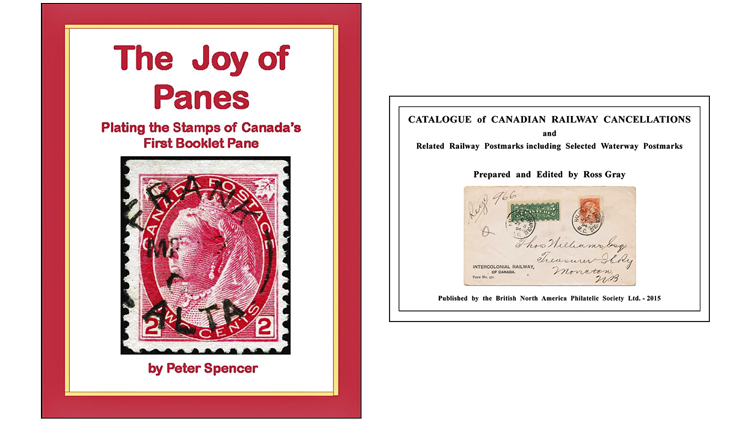 BNAPS published The Joy of Panes - Plating the Stamps of Canada’s First Booklet Pane by Peter Spencer in March 2015 and the second edition of Catalogue of Canadian Railway Cancellations and Related Railway Postmarks including Selected Waterway Postmarks edited by Ross Gray in April. Selling them to members at 40 percent off is a powerful incentive to join.
Previous
Next

Among the riches of our stamp hobby is its remarkable literature. This ranges from weekly publications such as Linn’s, to which many contribute, to authoritative handbooks that a dogged scholar creates through years of research, to catalogs that are quite literally the work of generations.

To an extent most pastimes can only envy, philately and postal history today are the end product of the dedication and insight of many minds putting pen to paper, typewriter to ribbon, or pressing “Save,” and then “Print.”

Philately has always been about communication and language, and has advanced to the high level it now enjoys through the industry of wordsmiths of every stripe. And I believe that if it is to thrive in the decades ahead as well, communication will continue to be the key.

Stamp clubs and philatelic societies that want more members know that showcasing the beauty, pleasure, history and humanity of stamps and the messages they carry are the most effective ways not only to attract new adherents, but also to keep the old ones fascinated with philately.

An outstanding example of this is the 72-year-old British North America Philatelic Society (BNAPS), “an international organization devoted to the collecting and study of the stamps, markings, and postal history of Canada and the pre-confederation colonies of British North America (British Columbia, Canada, New Brunswick, Newfoundland, Nova Scotia and Prince Edward Island).”

There are many organizations concerned with stamps and covers of our neighbor to the north, but BNAPS is the one that stakes a claim as “the society for Canadian philately.”

As with most societies, the flagship of its outreach efforts is its journal, the quarterly BNA Topics — each issue with 80 pages or thereabouts of news, discussion, research and fresh commentary.

BNAPS faces the same challenge all affinity groups face: of showing prospective members what the society has to offer in a way that whets appetites and sparks enthusiasm. They meet this head-on, by making all but the most recent five years of their journal available online to anyone who has an interest, with a powerful search function that can find what you’re looking for among seven decades of publication.

Access is through the Horace W. Harrison Online Library, named for a longtime member and former president who “firmly believed that philatelic knowledge should be shared among all philatelists. In his will, Horace bequeathed financial support to BNAPS to encourage such projects. BNAPS decided to place the vast library of information contained in back issues of BNA Topics on its website.”

Not only did it do so, but the library also links to more than 60 years of online archives of Maple Leaves, the quarterly journal of the Canadian Philatelic Society of Great Britain, and a rich archive of more than 100 issues of the quarterly PHSC Journal, published by the Postal History Society of Canada.

The BNA Topics archive is especially user friendly, in my brief but delighted experience. One page allows you to peruse issues 1 to 521 in any order you care to, while another lets you search the archive by title, author or subject, and provides helpful, yet detailed synopses to make it easier to find what you need.

Other Harrison Library links allow you to connect with The Canadian Philatelist, bimonthly magazine of the Royal Philatelic Society of Canada, and, for the bilingual, to read the first 100 issues of the quarterly Bulletin d’histoire postale et de marcophilie (Postal History and Postmark Bulletin) of the Société d’histoire postale du Québec (Postal History Society of Quebec). As the Harrison Library politely notes, “Both journals have online indexes.”

And then there are the books.

Shown nearby are the two books published by BNAPS this year: Catalogue of Canadian Railway Cancellations and Related Railway Postmarks including Selected Waterway Postmarks edited by Ross Gray; and The Joy of Panes - Plating the Stamps of Canada’s First Booklet Pane by Peter Spencer.

You might think that’s a fairly impressive accomplishment for BNAPS, but then it’s hard for non-members to grasp the scale of BNAPS’ book operation.

Since 2005, BNAPS has published 130 books. The year 2010 was slow, with just a half-dozen titles, but 24 were printed in 2006. All are showcased attractively on the BNAPS book pages on its website, with detailed descriptions of their genesis and philatelic significance.

Of the 130 books, 55 were exhibits and 75 were handbooks, surveys, catalogs, plating guides, postmark studies and related philatelic titles. These range in size from 34 up to 461 pages, but the average length is 156 pages, just shy of the 160-page length of a conventional 10-frame exhibit.

That comes to more than five pages a day for the past 11 years, some 20,263 pages in all. That’s a stupendous outpouring, and a remarkable accomplishment.

This is only possible with desktop publishing. Laminated covers and a sturdy plastic-coated wire spiral binding assure many years of use, but the individual books are printed as they are ordered. Instead of a ponderous tail of unsold titles, books are printed as needed, and can be easily updated, rearranged and modified to suit the author’s and the publisher’s requirements.

A few are shown nearby — selected, I confess, as much for the beauty of their covers as for their intrinsic philatelic worth.

Robert Pinet’s Victorian Montreal: Economic Hub of the Dominion is an outstanding 88-page display of a mature International Large Vermeil-winning exhibit of illustrated mail from the late pre-stamp era to the dawn of the 20th century.

Though it also began as an exhibit, The Larry Paige Collection of Canadian Flag Cancellations (1896-1996) and Early Machine Cancellations (1896-1902) is a much more ambitious undertaking. Long after Paige won the American Philatelic Society World Series of Philately Champion of Champions award at San Francisco in 1977, he continued to amass new covers and markings, compiling over the decades since the contents of this 406-page handbook.

Finally, at 90 pages, Rennie’s Seeds by Richard Lamb is another colorful exhibit that follows the growth and success of one of the great Canada direct mail-order businesses of the 19th century, which lasted through the generations from 1867 to 1960.

The dynamic BNAPS book operation is yet another incentive for collectors to join and contribute, because all members receive a 40 percent discount on all books. That’s a key factor in the sustainability of their publishing schedule, and in future planning for the organization.

It’s almost as though collecting Canada is a vast fraternity, an extended family of collectors eager to share and learn from one another.

I find that an appealing, inviting prospect. Which is precisely what BNAPS — and the late Horace W. Harrison, bless his soul — intended all along.