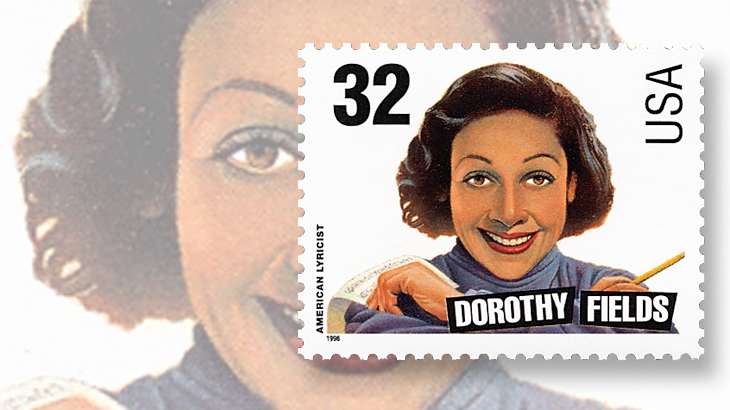 A lyricist for Hollywood and Broadway, Dorothy Fields was honored on a 32¢ commemorative in 1996.

Dorothy Fields, born July 15, 1905, in Allenhurst, N.J., was a top lyricist for film and musical theater. In 1927 she wrote lyrics for a revue at Harlem's Cotton Club that featured Duke Ellington and his Orchestra, and soon after she found great success in Hollywood and on Broadway, creating songs with various collaborators up until her death in 1973.

In all she wrote the words for more than 400 songs, many of which have become American classics, including On The Sunny Side of the Street, Pick Yourself Up, I'm in the Mood for Love, I Feel a Song Coming On, and If My Friends Could See Me Now.

Writing songs for movie musicals, Fields collaborated with an early songwriting partner, Jimmy McHugh, during the 1930s. Her work with Jerome Kern on the 1936 movie Swing Time (starring Fred Astaire and Ginger Rogers) resulted in an Academy Award for the song The Way You Look Tonight.

Fields began to focus on Broadway, and wrote lyrics and librettos with her brother Herbert Fields. Their 1946 collaboration with Irving Berlin, Annie Get Your Gun, was a huge and enduring success.

In the 1950s her work on shows included By the Beautiful Sea in 1954 (with Herbert Fields and Arthur Schwartz), and Redhead in 1959 (with Albert Hague writing music, and book by Herbert Fields, Sidney Sheldon and David Shaw).

A late success with Cy Coleman and book by Neil Simon was Sweet Charity in 1966.

Dorothy Fields was honored on a 32¢ stamp in the 1996 Songwriters set of the American Music Series (Scott 3102). The three other songwriters featured in that set are Harold Arlen, Johnny Mercer and Hoagy Carmichael.