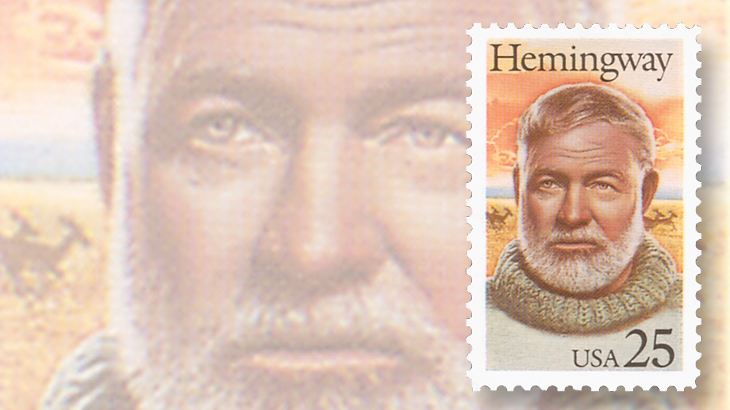 American author Ernest Hemingway was honored with a 25¢ stamp in the Literary Arts series in 1989.

The 1954 Nobel Prize in literature was awarded to American author Ernest Hemingway, who was born July 21, 1899, in the Chicago suburb of Oak Park, Ill.

The prize went to Hemingway "for his mastery of the art of narrative," which the committee cited as having been demonstrated in The Old Man and the Sea in 1952, and "for the influence that he has exerted on contemporary style."

Hemingway worked as a newspaper reporter briefly before joining an ambulance service in Europe during World War I. He was seriously wounded on the front lines in Italy and sent back to the United States.

After his recovery he lived in Paris and worked as a foreign correspondent, but he also began to write stories and poems, which appeared in his first collection in 1923. His novel The Sun Also Rises was published three years later.

He returned to the United States in 1928, originally making his home in Key West, but he traveled extensively, finding adventure in Cuba, the Caribbean, Spain and Africa. His many works include A Farewell to Arms (1929), For Whom the Bell Tolls (1940) and the memoir A Moveable Feast, published in 1964, three years after his death by suicide at age 61.

Widely recognized as one of the most important American authors of the 20th century, Hemingway was honored on a 25¢ commemorative stamp in the Literary Arts series in 1989 (Scott 2418).