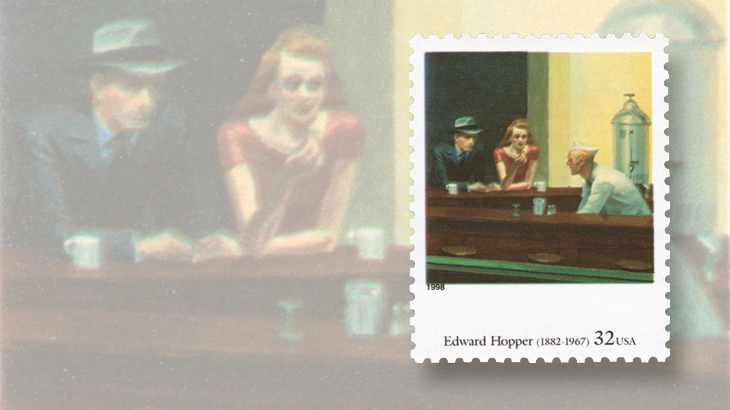 A detail from Edward Hopper's 1942 painting Nighthawks is featured on a 32¢ stamp in the 1998 Four Centuries of American Art set.

Hopper was born July 22, 1882, in Nyack, N.Y. He was encouraged by his family when he showed an interest in art at a young age, and undertook oil painting in his teens. After finding work as an illustrator, Hopper traveled to Paris three times between 1906 and 1910.

Hopper pursued oil painting, but also worked in watercolors and completed etchings. Financial success was elusive at first, and Hopper continued to accept work in commercial illustration until he was in his late 30s, when his fine art began to find an audience.

Settling in New York City, Hopper and his wife (and frequent model), Jo, would travel into New England during the summer. The settings of some of Hopper’s paintings reflect his urban surroundings, while others convey images of his travels by the sea.

During his lifetime, Hopper became one of the most popular artists of the 20th century. He died in 1967.

His 1929 oil-on-canvas painting The Lighthouse at Two Lights, Maine, was used as the vignette for the 6¢ stamp issued in 1970 to mark the 150th anniversary of Maine Statehood (Scott 1391).

The 20-stamp set titled Four Centuries of American Art was issued Aug. 27, 1998, and the 32¢ stamp in that issue honoring Edward Hopper shows a detail from his most famous work, the 1942 painting Nighthawks (Scott 3236p).

The most recent stamp to honor Hopper is a forever stamp in the American Treasures series issued Aug. 24, 2011 (Scott 4558). It features The Long Leg, a circa 1930 oil painting that shows a sailboat in a scene off the coast of Provincetown, Mass., and which includes the Long Point lighthouse there.