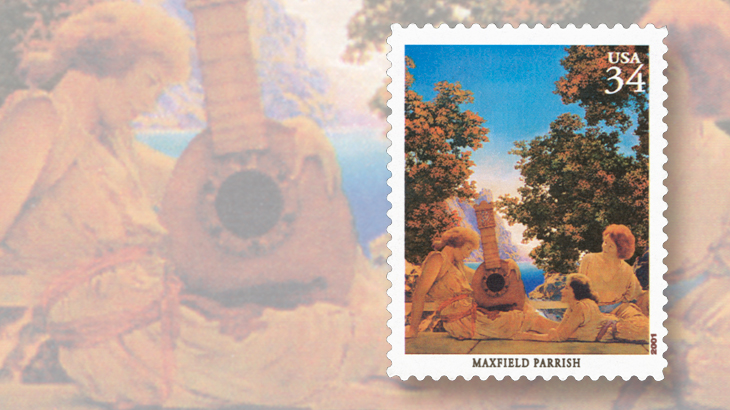 He studied at the Pennsylvania Academy of Fine Arts and the Drexel Institute of Art before embarking on a career in illustration in the 1890s. His often dreamlike commercial illustrations brought him considerable wealth and widespread fame, and his paintings are highly prized, commanding premium prices.

Parrish's 1922 oil painting Daybreak, considered his best known work, sold for more than $5 million at a Christie’s auction in 2010.

The 2001 stamp shows a detail from the 1922 mural Interlude (The Lute Players), painted in oil on linen canvas for the Eastman Theatre at the Eastman School of Music in Rochester, N.Y.

The inscription on the back of the American Illustrators stamp liner reads: “Maxfield Parrish (1870-1966) used alternating layers of paint and varnish to create the shimmering fantasy lands in his popular illustrations for books, advertisements, magazines and calendars. The color of his skies is still known as ‘Parrish blue.’ In 1925 an estimated one in four homes owned a Parrish print.”