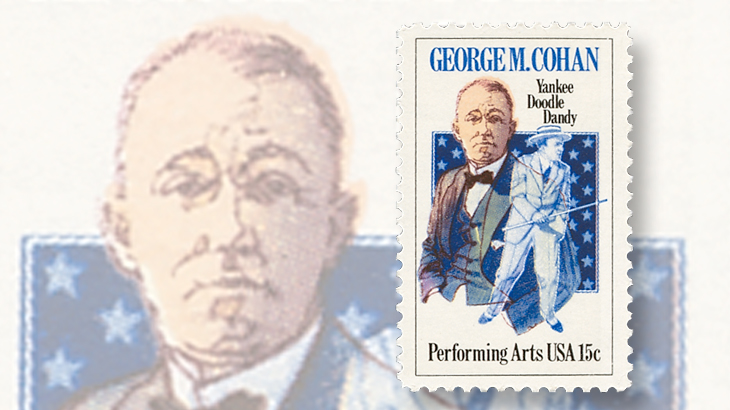 Songwriter and entertainer George M. Cohan is shown on a 15¢ Performing Arts series commemorative issued in 1978 to mark his birth centenary.

The man who claimed in song to be "A real life nephew of my Uncle Sam, born on the fourth of July," was actually born July 3, 1878. George M. Cohan was a larger than life figure and a songwriter with a patriotic flair, creating the most famous song of World War I, Over There, and an earlier hit for Broadway, The Yankee Doodle Boy.

He also composed the popular march You're a Grand Old Flag.

Cohan's career began as a performer in a family vaudeville act. In his teens he wrote songs for the stage, creating his first Broadway musical in 1901.

Three years later he created the show Little Johnny Jones with its hits The Yankee Doodle Boy and Give My Regards to Broadway. Cohan would later be portrayed by James Cagney in the 1942 film Yankee Doodle Dandy.

The 15¢ stamp honoring Cohan in the Performing Arts Series was issued on Cohan's birth centenary, July 3, 1978 (Scott 1756). It features two portraits of Cohan against a field of stars, along with the descriptive phrase "Yankee Doodle Dandy."