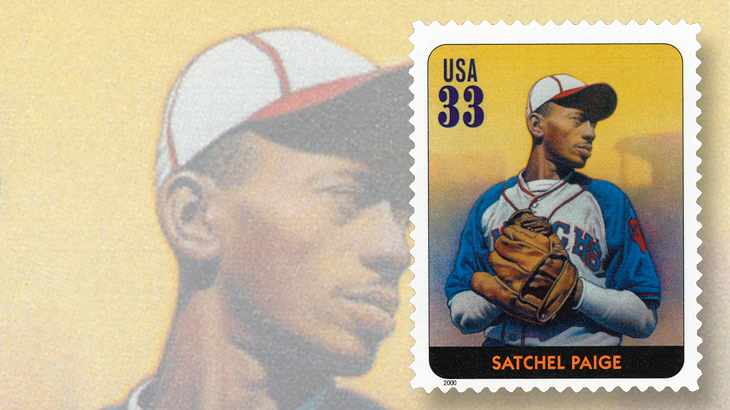 Leroy Robert “Satchel” Paige was born July 7, 1906, in Mobile, Ala. The right-handed pitcher with the scorching fastball played semi-professional baseball for the Mobile Tigers before joining the Chattanooga White Sox of the Southern Negro League.

Paige played for eight Negro League teams between 1926 and 1950, including several seasons with the Kansas City Monarchs, but he also pitched for the Cleveland Indians in 1948 and 1949, and the St. Louis Browns from 1951 to 1953.

Paige continue his career in the minor leagues for more than a decade, and in 1965, at age 59, he pitched three innings for the Kansas City Athletics. In that outing he gave up only one hit, a double to Carl Yastrzemski, the American League slugger who two years later would win baseball’s coveted Triple Crown.

Paige continued his career in baseball as a coach, working with the Atlanta Braves before retiring. In 1971, he was elected into the National Baseball Hall of Fame.

Satchel Paige is honored on a 33¢ stamp in the Legends of Baseball set issued July 6, 2000 (Scott 3408p). The back side of the liner paper on the pane includes this biographical information:

“A legend after two decades in the Negro Leagues, pitcher Satchel Paige signed with the Cleveland Indians in 1948. At age 42, this “veteran-rookie” helped his team with the American League pennant.”