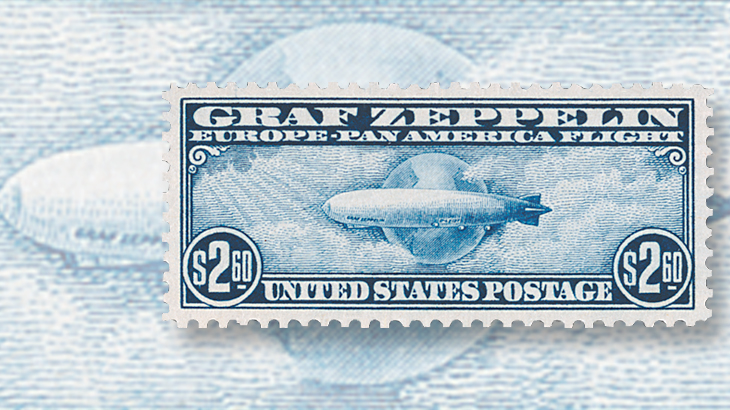 The $2.60 airmail stamp from the Zeppelin set of three issued April 19, 1930. The name of the rigid airship honors German Count Ferdinand von Zeppelin.

Three well-known United States airmail stamps issued a little more than 85 years ago bear the name of a German count who was a pioneer in the field of aviation.

The lettering on the stamps refers specifically to the airship pictured on each stamp, which was named Graf Zeppelin after the count. The three stamps were intended for use on mail that would travel on the first Europe-Pan American round-trip flight of the Graf Zeppelin in May 1930.

Count von Zeppelin was an army officer in his early years and learned about developments in ballooning during the American Civil War, when he met balloonists Thaddeus Lowe and John Steiner while serving as an observer for the Union Army.

After returning to Europe, Zeppelin’s experiences contributed to his designing the first rigid airship, and to his first successful airship flights in 1900.